Cataloguing the World 3: The Inkle Loom.


Do you remember this image from my previous bog about inkle looms from January 2017 .  Whilst on holiday in Finland in September we visited Turku, the old capital of Finland.
Turku castle was restored after the war and is a must see sight for anyone visiting the town.

In one room, the displays were captivating. The centre of the room had a tableau of mannequins in period costume. The information was extensive. Displays around the room had various artefacts relating to costume. One had this picture as a backdrop.
I did not expect to see an enlarged picture of the inkle loom. 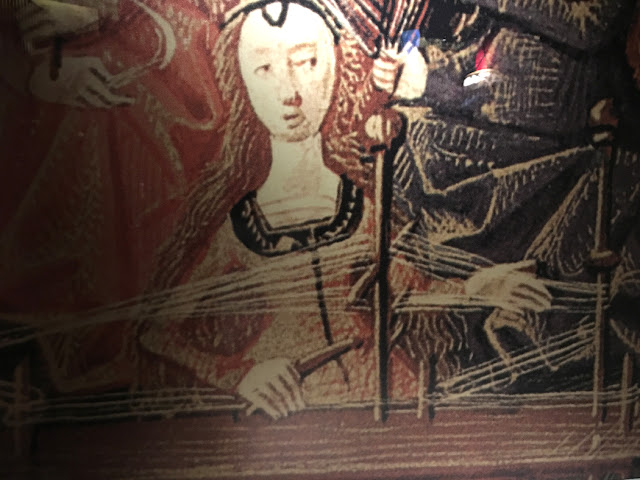 It is from Le Livre de bonnes moeurs de Jacques Legrand which dates to the 15th century. The probable date is 1490.

The close up gives the detail of how the weaving is threaded around the posts.  Unfortunately as the weaving has not started, the process is unclear.

Inkle looms now come in various shapes and sizes.  There is a wonderful variety available, particularly in the USA. 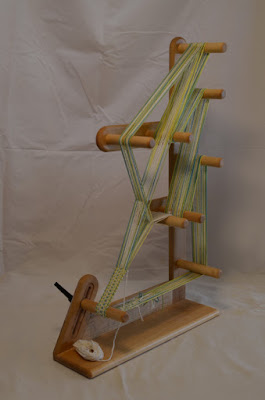 In this upright model the weaver has a good view of the woven band. 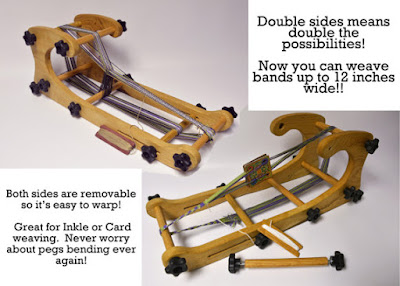 Double sided looms are also popular.  The pegs will not bend in use and the whole loom is very stable. 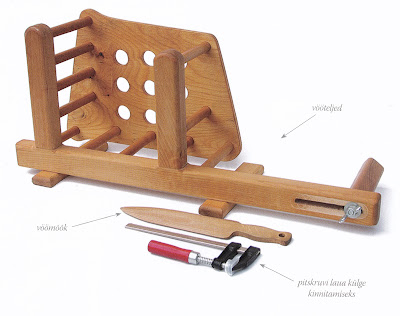 This one is illustrated in the Estonian band weaving book. Again with a removable side, the pegs will stay level and will not warp. 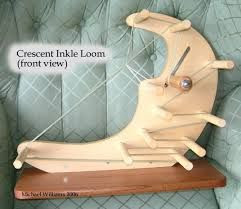 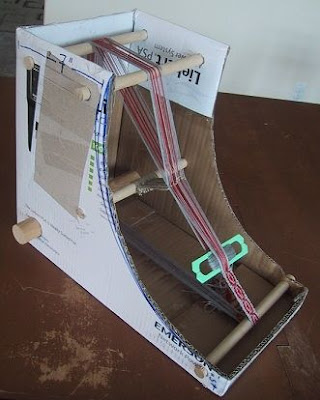 This crescent shape is so elegant.


You can even make one out of a cardboard box!

Another home made loom. 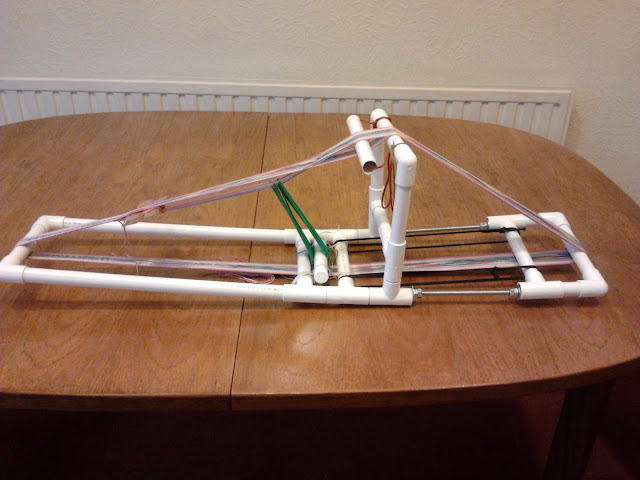 This loom was made by Margaret Parker and her husband out of waste water pipes.

They made it following the instructions in the link to an Interweave Press booklet on band weaving, but it was difficult to understand how to get the two sheds. The geometry of the loom, the path taken by the warp and the position of the heddle and shed sticks seemed to make this impossible. They made some modifications: .

- made the heddles at least twice as long which means there is  nowhere on the loom which can be used as a former for  making them.
- tied the shed rod firmly once we had got it in place.
- use hand manipulation to get the two sheds

Although it seems bow shaped it works well. As it is not as rigid as a wooden inkle loom it can become a bit skew whiff (or wonky!) with use but it is easy to straighten it all out again from time to time and make it all the angles sit at 90 degrees. This does not seem to affect the tension across the width of the weaving.
Inkle looms are expensive, so this cheap alternative is ideal for someone who would like to try this craft. York and District Guild of Weavers Spinners and Dyers have planned an informal workshop for people interested to make their own from this plan.


I have a floor inkle loom given to me by a friend.  It is not in the best of conditions but it works. The earliest floor inkle I have found is from Scotland.  It is dated 1688. My floor inkle loom has a sliding peg in the centre collumn so that the tension can be altered.


Floor inkles also come in a variety of shapes. Some give the opportunity to make very long band indeed. This is being used for tablet weaving but is also designed for inkle weaving.

This lovely floor Cendrel inkle by Leclerc looms is an updated and very practical design  What I particularly like is the fact that it can be used as a warping frame as well. 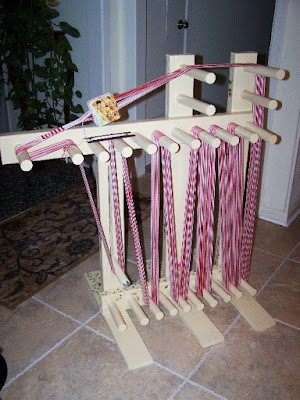 These two versions are very attractive and allow for a very long warp. They look very stable and there is plenty of room for the weaver's legs. 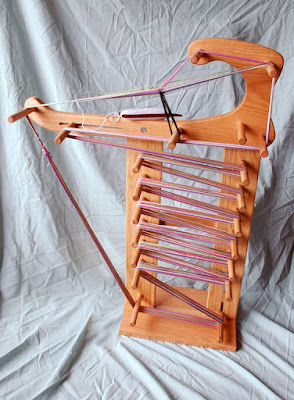 Here are two Swedish band looms which give the weaver the choice to weave as an inkle loom with heddles or with two shafts to make the sheds. 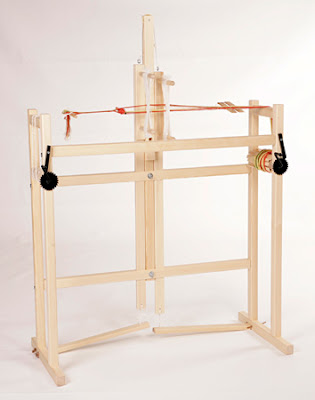 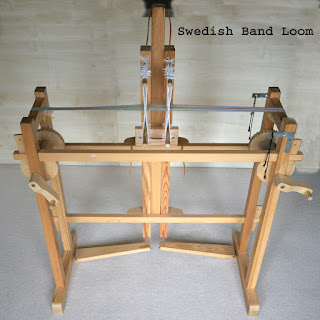 This is my Swedish band loom with my own handy brackets for warping.


Finally, I found a picture of this tape loom.  It is not an inkle loom but has two rigid heddles operated by foot treadles. 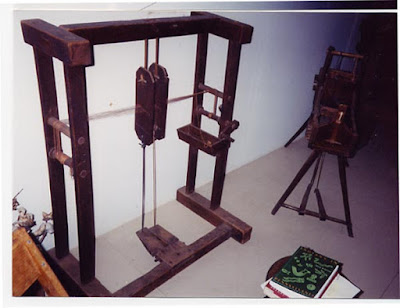 It is a fascinating version of a tape loom from the Landis Valley Farm Museum, a museum that documents Pennsylvania German culture and history. This museum looks wonderful and I would love to visit it.

I was particularly interested in this unusual design because of the picture in the frontispiece of a book from 1524. 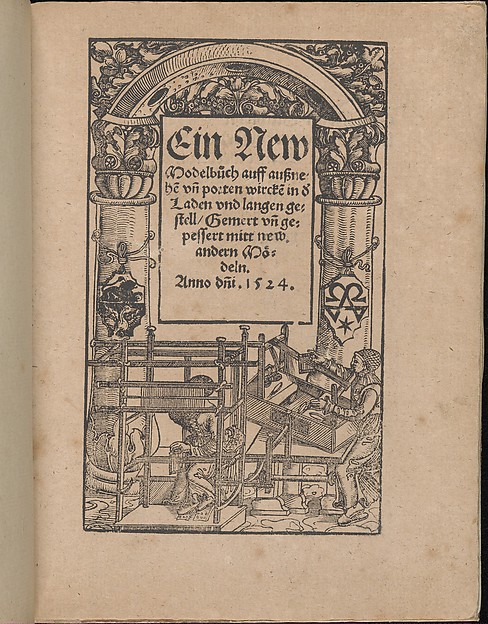 This is a page from the  Ein new Modelbuch by Johann Schönsperger the Younger (German, active 1510–30) and dates to 1524. You can see the large loom on the bottom left of the engraving which shows a woman weaving a narrow band using a rigid heddle. Examine the original image here:

She appears to have two pedals to use but there is no connection between the pedals and the rigid heddle.

Of course there are also some very creative designs for tablet weaving. 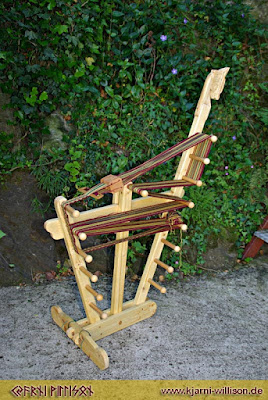 This looks very stable and ornate with the horses head carving. 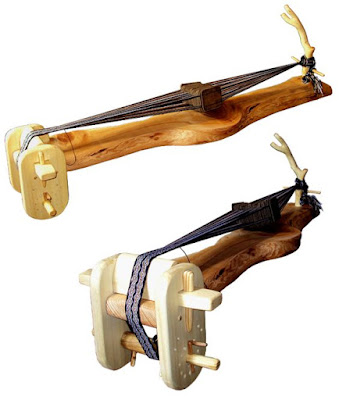 This is a very interesting variation.  This design allows for the warp ends to be untwisted when weaving with tablets.  The warp can be as long as will pack onto the warp beam at the front.


A big thank you all the Museums, Universities and Galleries who are taking the time to digitise their collections and to Pinterest for providing a way for people with similar interests to share their finds.