Braids, Bands and Beyond 2016, Tacoma USA 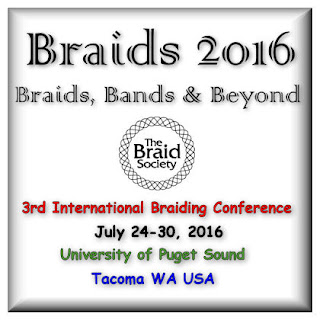 The Conference proceedings has articles by every tutor. My article: Craft, Individuality and Design was used during my workshop to show examples of bands from the Baltic region.


The International Conference in Tacoma was inspiring. The campus at the University of Puget Sound was so beautiful and peaceful and manicured!

Some participants came to take one type of craft, others tried new crafts.

The week started with a WOW factor.  The first lecture by Carol James outlined her love of the sprang technique and how she came to reproduce the military sash of George Washington.


I taught for two days about weaving patterned bands using the double slotted heddle. I had an enthusiastic class of 15 who showed considerable ability in learning to weave using a back strap. What is so enjoyable about teaching is that I always learn so much from my class.
One class member, Karen, had a brilliant idea for the band width checker which I show here.

Use graph paper and draw coloured lines.  Cut out the widths that you want and lay them onto laminating film. 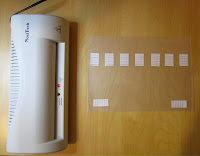 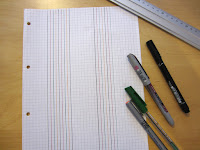 Put the film through the laminator and then you have a selection of checkers to use.

The transparent nature of the film makes them particularly useful.

Pam brought in her box loom which was lovely.  Wood is so warm and smooth to the touch,

Here is a close up of some patterns.

I demonstrated weaving and also a quick way of making full tassels and whipping the ends. West Country whipping, from the Ashley Book of Knots, is going to become very popular.

I had brought a number of samples of belts from different countries around the Baltic for everyone to see and touch.  I even wore one of my Leilvardes belts to the evening meal at the end of the week.

I showed them a picture of the wonderful band woven by Barbro Wallin, author of the book, Moraband.  I had visited her when I was last in Sweden and she sent me this picture of a 4 metre band she had woven with no pattern repeats.  A work of art! The class were very impressed.

At the end of two days the class had woven a considerable length of band.  Each band is the story of their weaving journey.


On Wednesday, the conference went on visits to various museums.  If you look on the Facebook site for Braids and Bands you will see a lovely short video of the Burke museum.  https://www.facebook.com/groups/BRAIDSandBANDS/

This museum had some amazing artefacts and had arranged for a student to show and talk about a selection of braided and woven items.

The outside of the museum had the legend  Discover, Examine, Uncover Celebrate which seemed a good description of what we were doing at the conference. I was very interested in the North West Coast Indian Art.  I first came across this in the wonderful early book by Frank Boas called Primitive Art. I treated myself to another book from the museum by Bill Holm on Northwest Coast Indian Art: and analysis of form. Something to savour now that I am home.

I was thrilled to find that there were two programmes on the BBC about this in August. Called: Masters of the Pacific Coast: The Tribes of the American NorthWest, it covered the history of the Tribes and their treatment by the authorities in the 20th Century.  Dr Jago Cooper from the British Museum was an authoritative and interesting presenter. Here is the link:  http://www.bbc.co.uk/programmes/b07m771x

You can view some clips from the programmes.

We had lunch at the Indian Cultural Center which had stunning views over the bay. It was a perfect place to have out lunch.

The Seattle Art museum was our afternoon stop.


There was a special exhibition of indigo and of gold so we were treated to some fabulous textiles.  I am very interested in the Ainu robes so I was particularly pleased to find two on display. When I visit Japan in three years time, I want to travel to the Ainu area so that I can see these wonderful robes in greater detail. they are all different and the patterns relate to the person for whom it is made.

I took two classes on Thursday and Friday.

The first was Modern Macrame bands - which I soon thought of as macho macrame. Carol Wang was a lively and accomplished teacher and I thoroughly enjoyed being a learner for a change.

I made a bracelet and learned to tie a Chinese knot.  I was very pleased as I had been trying to learn how to tie this knot from a book and failed. Carol made it all very clear.

The final day, I learned about Sanado-himo bands from Tamaki which was shown in my previous blog.


The whole week was inspirational.  There were two lectures by Roderick Owen; one about Peruvian Headband braids and the second the story of his interest in braiding.

Anna Sparr showed us how hair braiding was important to the Swedish economy of one village in Sweden.

A fascinating trip was undertaken by Katia Johansen,through the braids on costumes in the Royal Danish Collection. This well illustrated talk showed some of the many expensive braided adornments on these outstanding costumes. This showed us details which would not usually be available for members of the public.

Kim Davis explained the intricacies of early bobbin lace.
Even if the topic was outside of your field of interest it was still worth while attending. I found that there were surprising facts in some of the talks which related to my own area of interest which were highly significant.

If you want to see  more about the conference go to the Facebook page for Braids and Bands. here is the link. https://www.facebook.com/groups/BRAIDSandBANDS/


Finally, here is a pattern for weaving a backstrap. If you like to use a backstrap, it is fun to weave your own.


Weaving a backstrap in linen.


This backstrap is made of linen.

Warp Yarn: Finnish linen 4 in blue.  16/2 Swedish linen in red and white used double for each warp end.   Two strands of this yarn is thicker than the Finnish 4 linen.


Weaving tips for weaving on a four shaft loom.

Weaving a tag for the backstrap.

I also made a tag for the backstrap on my standard heddle.

Posted by Durham weaver at 06:00 No comments:

In July, I attended a workshop in Tacoma, USA run by my friend,Tamaki.  She has researched the lovely woven bands from Japan called Sanada-himo. These are used in present day Japan for wrapping very special presents and parcels.  They are also used to fasten the boxes that contain the equipment for the Japanese tea ceremony.

The woven bands are a warp faced plain weave with the weft being thicker than the warp threads. The traditional material is cotton. They were not just very practical. The patterns are made with beautiful muted colours.

Originally, the colours were obtained from 70 different plant species, such as brown from the skin of the Japanese chestnut, yellow from Cape jasmine, red from safflower and purple from gromwell root.
Commercially woven bands still retain the lovely muted colours of natural dyes.

The article by Tamaki  Takagi in the proceedings for the Braids 2016 Conference describes the historical background to these lovely woven bands which she has researched.   Buy a copy of the proceedings which contains many other fascinating articles.

The Conference Proceedings are an excellent record of the variety of workshops and lectures given at the Conference.

Copies are available to buy from the Braid Society once they arrive into the UK.


Here are some photographs of the Sanada-Himo workshop that I attended in Tacoma in July. 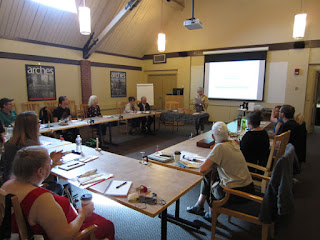 Historically, these ribbons were used as decorative ties for suits of armor, scrolls and even kimonos. They are now more commonly used as packaging ties for the elegant wooden boxes used to store the ceramics used in the Japanese Tea Ceremony.

Nowadays, Sanada-Himo bands are used for other purposes.  Here is a video which shows the bands wrapped around bicycle handlebars.

In Japan, cherished items are customarily stored in purpose-made wooden boxes including the valuable items for tea ceremony.  If the ceramic has a long history, several layers of boxes several boxes are used:  an inner storage box (uchibako), middle storage box (nakabako), and outer storage box (sotobako). The storage boxes for tea implements often have inscriptions which indicate the maker and owner.

Chabako (茶箱, literally "tea box[es]") are the special lidded boxes containing tea bowl, tea caddy, tea scoop and other equipment used in the Japanese Tea Ceremony.  The "Rikyū model" is of plain paulownia wood and may be large or small. Tea boxes are ususally made of wood, and may be lacquered and decorated, or left untreated.

They are tied with a Sanada-himo band.


Here is a YouTube video showing how to tie a bow on a wooden box.

How to tie a wooden box (tomobako) for Japanese ceramics  https://youtu.be/1zuahFCGWag

Here is aother blog which shows how to tie a Sanada-Himo ribbon around a box.  Sanadahimo (Japanese Close-woven Samurai Ribbon)

Of course there are other ways of tying decorative knots with stiff cords so I thought that I would share this video:


If you want to try another type of wrapping, there is an interesting YouTube video which shows how.

There are many different ways of tying bands around a box.  Here is another example. 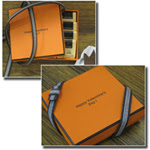 I hope that you have enjoyed finding out more about Japanese Sanada-Himo bands.
Tamaki presented the history of Sanada-Himo bands and showed us how to tie a box.  I am now weaving my own at home.


Here it is.  I am using the lovely bamboo heddle from Tamaki and the shuttle from Don Betterley.

If you want to find out more, do buy a copy of the Conference proceedings. The article by Tamaki is fascinating and it is probably the first time that this topic has been covered.

Check out my Pinterest board to see more examples of Sanada-Himo bands and videos.