Travels around the Baltic: Estonia 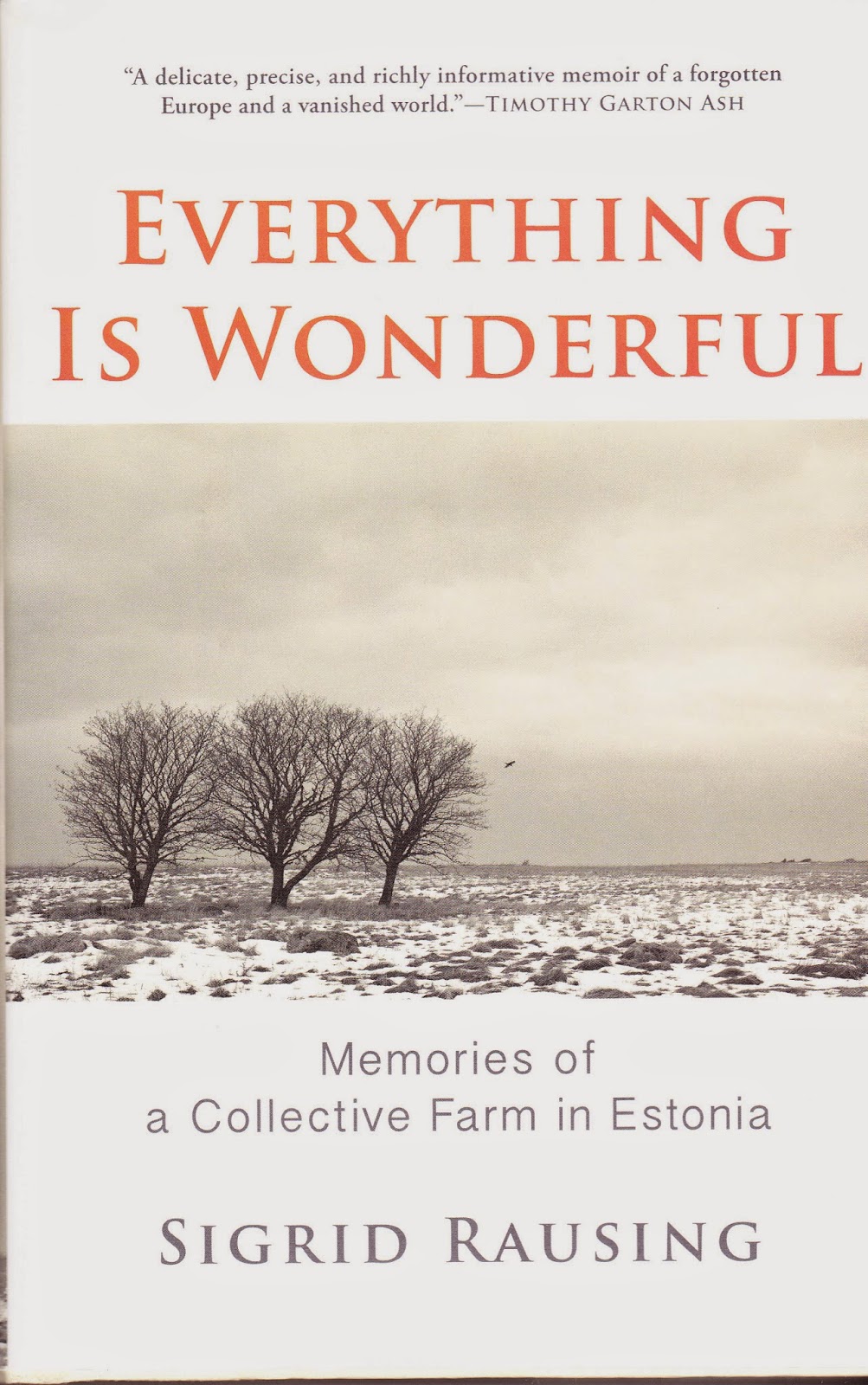 Whilst planning our trip, I read many books and articles about the countries we were to visit.  Sigrid Rausing had just published an account of her stay in Estonia in 1993-4 whilst completing her anthropological fieldwork. She describes the lives of the minority Swedes who lived on the peninsula of Noarootsi.  Estonia had become an independent country once more and the world changed for the people of this small country. It is a very moving account.


Our first stop was Tallin, the capital of Estonia. It is a striving modern city but it has a charming old town centre with a delightful old quarter full of craft shops.  I found this shop which sells the best of Estonian craft. It is in the centre of town and very near the oldest coffee shop which is definitely a place to visit after shopping.
Many craft shops had woven bands and the lovely striped material typical of the country but this shop had the best selection. I bought a number of examples of the woven bands.


We went to the Estonian Open Air Museum outside the town.  Fortunately on a Saturday, a local folk dance group performs.  Here they are dressed in a variety of costumes from around Estonia.
The typical Estonian inn, the Kolu Hall served traditional food which was simple but very tasty and very popular.The adjoining hall, which originally had been the stables, had a display of old textiles.
Here is a close up on one of the wall hangings. 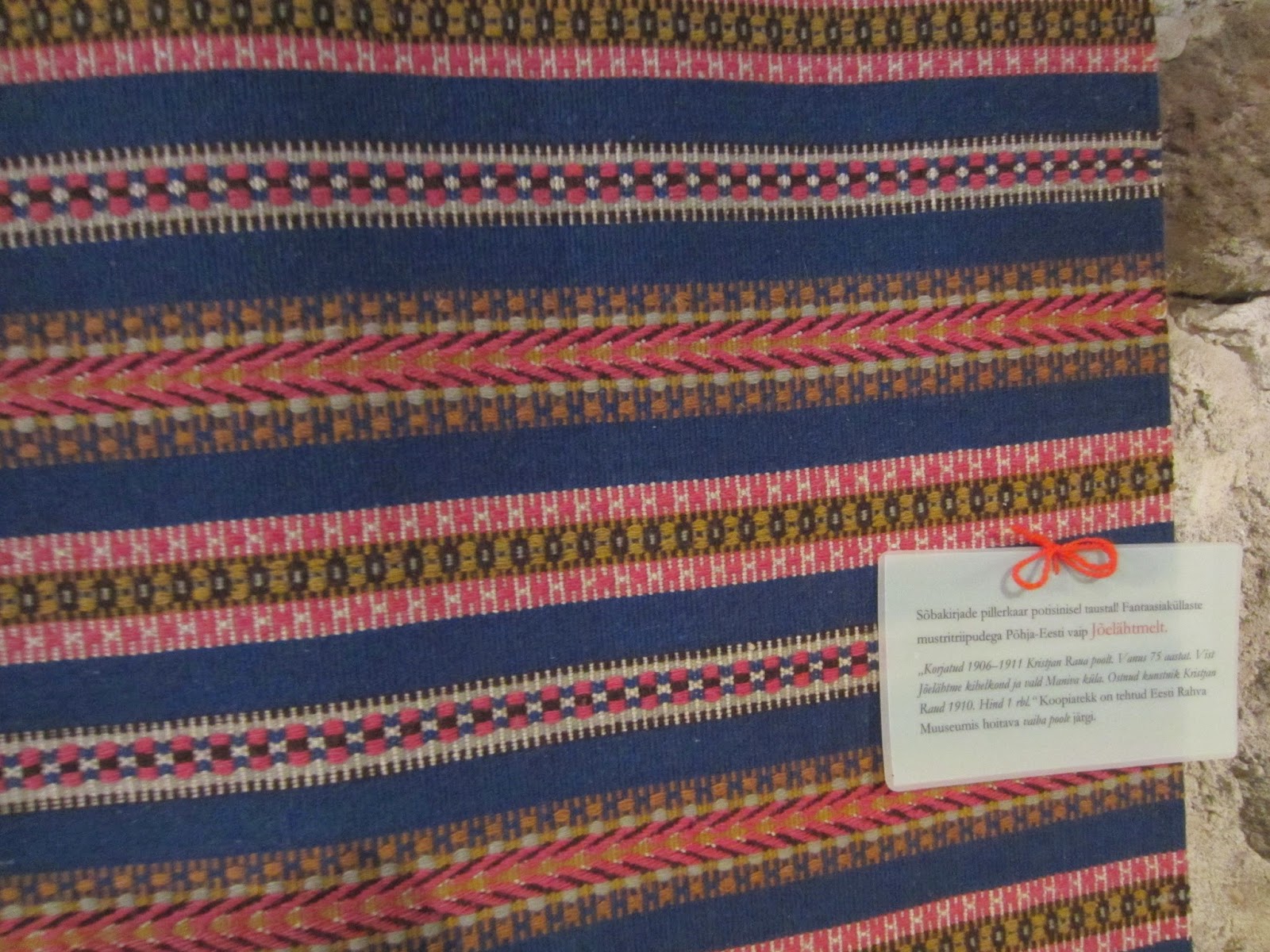 My impression of Estonia is that education and knowledge are considered very important.  There are an impressive number of lovely books on various craft topics which are superbly presented.  There is a realisation that if crafts are to survive then providing the detailed information in an attractive and comprehensive way is essential.  There are books giving knitting patterns for patterned mittens, books on weaving and embroidery.  These are not coffee table picture books but have clear instructions for anyone who wishes to learn and practice the crafts.

The book is in Estonian but the illustrations are very clear.


Too often information about patterns is not available or hidden away in museums.  The Estonian Government seems to have taken the decision to provide funds to enable a range of  publications.
This spreads to all media.  Estonia is well known for its impressive internet access.  The internet is also used to disseminate useful information about Estonia, its history and people.  The Estonian Institute has a useful web page and runs Estonica:  the Estonian Encyclopedia.  I have given the link to the page about Folk costume.

From Tallin we drove down to Tartu, the university town.  The university is the oldest in the region. It was founded in 1632 by Sweden.


The town square is very pretty but it was raining hard so we spent a lot of time in a coffee shop.

This is Alantis where we met Gunnar and Kristiina for coffee.  Unfortunately the weather was dull and rainy but in the summer the river is busy with tourists. Gunnar lovingly makes beautiful wooden weaving tools and it was a real pleasure to meet him. See the equipment stockists on the blog page for details.

I had arranged to go to the museum in Tartu to view some woven belts behind the scenes.  The staff were helpful but unfortunately I was not allowed to take any photographs. It is the only time that I have visited a museum and not been allowed to take photographs. In order to analyse a band pattern, I need photographs to see the pattern and the construction more clearly. I enlarge the photographs on my computer to make the graph of the pattern. My photographs are private but I send any analysis to the Museums concerned. Band analysis is very time consuming.  The greater number of pattern threads, the longer it takes to graph the pattern. Some very complex patterns can take over a week to analyse. I came away very disappointed.  I wrote some notes about the bands I was allowed to see but it is simply not possible to do any detailed pattern analysis on the spot.

It was a very long way to travel but the few bands that I was given to look at were interesting for two reasons.  All were woven on a circular warp and had never been used as belts.  They were still uncut. Although I had to wear gloves to examine the bands, they were made of a rather coarse wool, in fact, very similar to the modern woven belts that I had purchased.  The museum is putting its band collection online, but I have been unable to trace the bands I saw, even when I used the accession numbers for the bands. However, the museum had a very good shop and the staff there were very helpful.

On our way back to Tallin we stopped in Parnu.  Unfortunately for us it was Sunday and we could only stay for one night.  It is a lovely seaside town with an old centre that is being restored.  There is a striking collection of 1930's buildings at the coast and a lovely Art Nouveau house in the town.

The Tourist Information Office was excellent - as indeed they all are in Estonia.   They have an impressive selection of information booklets in English that are both quirky and informative.
Her is a selection.

I bought a number of  lovely woven belts in Estonia. Here is one of them.  It is a similar structure as the Sámi bands in the workshop I have been giving for the Braid Society. Here the pattern threads work in groups against a plain weave background. It is not warp faced. 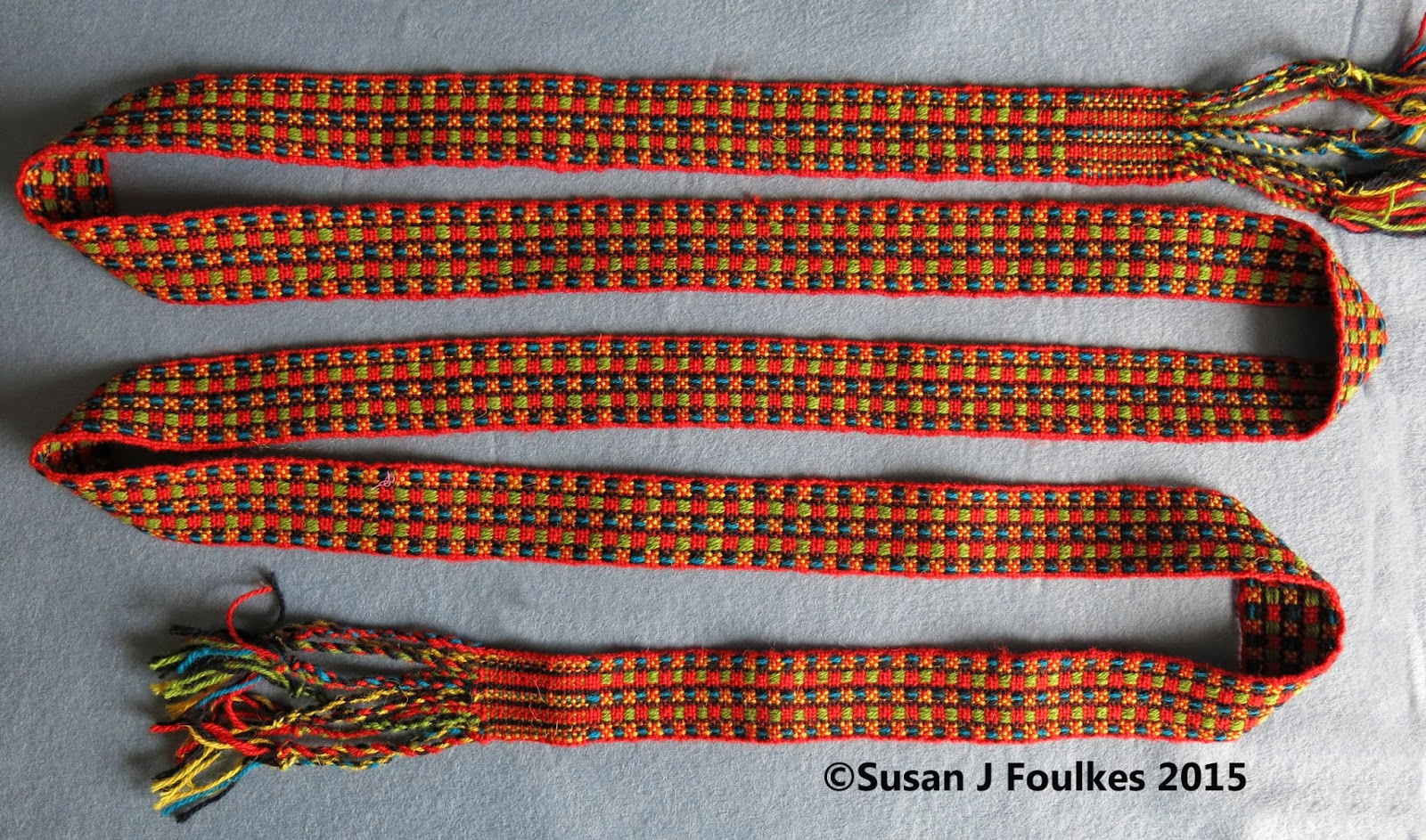 The wool is rather coarse to the touch but the colours are lovely and bright. There are three groups of patterns threads in black, blue and black and two groups with three threads of green. It is 4cm in width and 263 cm in length excluding the fringes.

The book about this type of Estonian band pattern, Lapilised Vööd by Merike Freienthal and Veinika Västrik  is listed on my blog. It is in Estonian, but the graphs and pictures are so clear that any weaver can understand the process of weaving and the patterns.

The beauty of Estonian craft

Gunnar Karro works wonders in wood.  He designs and carves the most lovely weaving implements. Friends of mine had bought some of his work and whilst I was in Estonia last summer, I arranged to meet him.

He sells his work on Etsy  https://www.etsy.com/uk/people/Ampstrike

We met Gunnar and his wife in Tartu, Estonia.   He showed me the range of items that he makes.


The temptation was too great and I came away with a lovely curved shuttle and a lucet.  I use a lucet frequently as I can make coloured narrow cords out of fine thread. It fits in the hand so well and is so smooth to the touch.

I know that some of his customers have asked for specific designs, so I commissioned him to make a heddle and shuttle with a delicate carved horse.

I gave him a picture of the Uffington White Horse and he translated this ancient design into a motif for my heddle and shuttle.

The two colours of the wood of the shuttle makes the horse look as though it is running along a hill top.

Gunnar also made a handy stand for the heddle and shuttle.  This makes them items for display as well as use.


If you want to know more about the Uffington White Horse, see more information about the horse at this link.     http://en.wikipedia.org/wiki/Uffington_White_Horse

This is the Uffington White Horse.  Recent archaeological evidence dates suggests that it is at least 2,500 years old and was initially constructed in the early Iron Age or perhaps even the late Bronze Age. The position and its distinctive shape has been maintained more or less intact since that time.[i]

Terry Pratchet's book A Hat Full of Sky describes a carved chalk horse - 'Not what a horse looks like, but what a horse be ...It had been carved in the turf before history began, by people who had manged to convey in a few flowing lines everything a horse was: strength, grace, beauty and speed, straining to break free of the hill.' (page 78)

I have started weaving with the heddle.  It is a joy to use and will always remind me of meeting Gunnar and his wife in Tartu.  I am touched by the beauty of the carving and the wood.  Wood has such a warm smooth feel. One friend described his work as feeling like silk and I now know what she means.