Finally Summer School is here.  I seem to be taking a lot of things for the two workshops that I am running but I wanted to be certain that I had everything that I might need for the week. Every box is labelled and lists made and checked.  There are 250 students attending Summer School and there are many lovely and interesting workshops to choose: weaving, spinning, basketry, ply-split braiding, design and dyeing

Cotswold Court is at the centre of the classrooms for the workshops.  Time stood still for the week whilst we were there.  It was always 5 to 6.

I arrived early to set up my room.  Fourteen students using backstraps take up a lot of space. I had also brought along many woven samples, some bought in the countries around the Baltic. 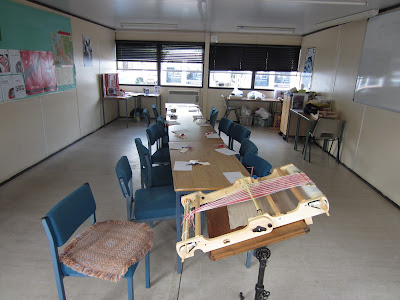 The theme for the patterns is knots and meanders.  I had produced a booklet of designs for the students to try.
The first 2.5 day workshop was for beginners.  Everyone could go at their own pace. The 13 pattern slot Sunna double slotted heddle was used.  All the patterns in the booklet are for 13 pattern threads.

I provided the double slotted heddles ready threaded so that everyone could start weaving straight away. It is important to ensure that the heddle is level and that all the warp threads are at the same tension.  Some students found it easier to work whilst sitting on the floor.  This gives a much better angle for the warp. Some students attached themselves to the window catch which brought the warp up to a good angle for weaving. A couple of students wanted to use their rigid heddle loom.  This also gives a very good weaving position. Posture is very important.  When concentrating it is easy to forget to move occasionally.  Every half hour or so, I would get the class to stretch or stand up and move around.


Asymmetrical patterns are harder for beginners and it is easy to make a mistake.  However, this made a lovely variation.

When the first warp was finished, the students had the opportunity to make a warp and thread the heddle.  All useful skills when weaving at home.


The whole class worked very hard.  We started at nine in the morning and finished at five and some students even went back in the evening.


The band lock is veryuseful for keeping the tension of the band and is easy to release.
.

We had been advised to bring a cushion to Summer School.  Steve was very industrious and made his own cushion cover from inkle bands he had woven. Everyone was very impressed!

Some students attached themselves to the window catch which also gave a good working angle.

There were also many evening activities in the Construction Hall, including making party frocks and skirts.

The Association is celebrating its 60th birthday so a party was planned for the final evening with a 1950's theme. I made a fascinator to go with my 1950,s outfit.

My fascinator is in progress with the red and blue feathers.

There was very little time for the tutors to see other classes.  However, the Cocoons to Cloth workshop with Jane Deane was of particular interest for most people.  Here a few silk worms were busy eating and eventually spinning, whilst the rest of the class produced their own spun thread.
Soon one of the silkworms had spun a cocoon.
The first three days passed very quickly.  On Wednesday afternoon visits to nearby attractions had been arranged.  I had the opportunity to go around some of the other classrooms to see work in progress.

Posted by Durham weaver at 15:07 No comments:

The Durham Tartan and another tartan mystery

I mentioned the Durham tartan in my last blog so I thought that I would give you more details about this lovely fabric. But first of all I must tell you the story of how I found it.

My friend Richard sent me a picture of a set of Northumbrian small pipes.  These pipes had been made in 1800 by R Reid in North Shields which is just north of Durham.  They had been in a museum in London but unfortunately they were stolen and all that is left are two black and white photographs of the pipes.

The description of the pipes shows that it must have been a special commission because of the materials used.


This is a luxurious object.  The chanter and drones are made of ivory and there are 7 silver keys.  The ends of the drones are carved in a lovely thistle pattern.  The bellows are silver mounted. The two photographs were taken using different processes so the black and white images are slightly different.

The picture is not very clear. The description of the bag says that it is an old velvet tartan.  I scoured the books about tartans but could not find anything resembling this pattern.  Tartan velvet was and is a luxury fabric and although the photograph is in black and white it is possible to make out the plaid pattern. The warp and weft are different but it has a very distinctive set of white or light coloured stripes which may make it possible to identify a particular tartan or plaid pattern.


I tried to make a drawdown from the black and white photographs of the pipes.  This is not an accurate tartan pattern but gives some indication of the distinctive white stripes. This may help in identifying a possible pattern. Of course, there is no indication of the actual colour of the velvet tartan bag. The white stripes are the only feature which could assist in any identification. The warp and weft colour order is different, which is also unusual.

These pipes were a luxury item made as they are from ivory, silver and tartan velvet.  It would seem probably that they were made for a specific client but who and exactly when we do not know.  If the tartan could be identified this may give another clue as to the reason these pipes were made.

If anyone has any idea what the tartan might be, do get in touch.

If we could identify the tartan, it might give some clues as to where the pipes were used.  Velvet is a luxury material so the velvet tartan might have been a special commission. It is probably made of silk. Nowadays, velvet tartans are used for the waistcoat to match a kilt.


What I did find in my search for the old tartan pattern, was the Durham tartan.  There is no reason why Durham should have a tartan. The Durham district tartan first appears in the record books of Wilsons of Bannockburn in 1819.  It is an early tartan.

Why it is called the Durham tartan is a mystery.  It may have been named after a person not the county of Durham or Durham city.

Here is the pattern.

It is in 2/2 twill.  The warp colour order is as follows.

It is a lovely pattern.


County Durham has not made much of use of this tartan, but I gave the pattern to Douglas in the Durham Guild and he has woven it many times.
Click here for a useful link which shows the range of District tartan patterns:
http://www.scotclans.com/scottish-clans/tartan-pattern-book/district-tartans/