I have been very busy since I completed my Masters degree. I have written four articles. I have woven three sets of dish towels - 10 towels in all as well as two bath towels. I wove a set of waffle weave hand towels for a friend. I have also been weaving metres of narrow bands for various projects and experiments. I have given three Zoom talks and I am preparing another one for later this month for a Guild in the USA. I have also started to think about workshops.  I am so looking forward to face to face teaching again.

I have a large amount of stash - yarn bought over the years and not used. I thought I would try to use up some of this stash. I have a collection of tow linen which I bought to weave some sauna towels.  After I wove one my husband said that they were too coarse to be used for drying so this box of yarn has lain undisturbed for years. I decided to weave a set of backstraps for my workshop in 2022 and also a set of simple rustic drawstring bags for holding equipment.

Here is my backstrap project. 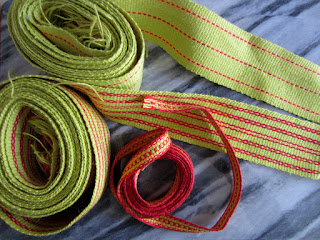 Here are the woven lengths for the backstraps and one length of the ties for each end.

1. The pattern for the first backstrap has 89 warp ends using some left over Finnish linen 6 with Swedish tow linen 6 used double.

2. The second backstrap length has 83 warp ends using the same combination of linen.

Ties for the backstraps 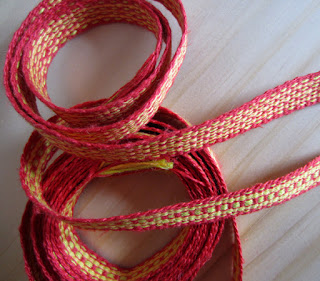 For the ties I used tow 6 linen doubled.

The second tie has 33 warp ends.

I then folded down the hem again. 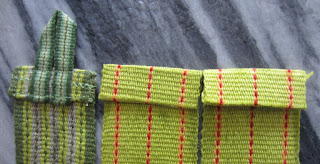 The finished backstrap was woven some years ago.  I decided that a wider backstrap was preferable.
Take the tie band and cut two lengths of 19cm.

Fold in half and press firmly.
Turn up the cut end and again press firmly.  This cut end will be inserted into the turn down at the end of the backstrap. 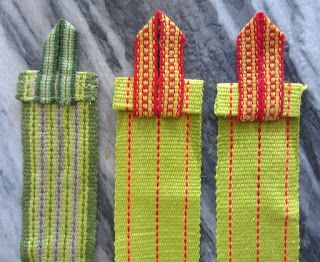 Now press firmly and tack in place.  End ties are ready to be sewn.
Here is the pattern for the green backstrap which I wove about five years ago. 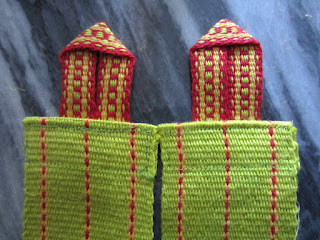 The finished backstrap.  I need to twist a cord for the fastening but at least I have made a start. Only 14 more to go!
Happy weaving
Susan J Foulkes MA (Art Hist) (Open)
Posted by Durham weaver at 06:30 4 comments: