What is on my loom - February


In 2003, Handwoven magazine had an issue devoted to stripes.  I love stripes and I particularly liked a set of tea towels which were is the exact colours to match my kitchen.  I wove a set and after constant use, they were looking rather tired so I wove some.  Handwoven is published by Interweave Press and you can now buy digital versions. Click here for details.

It is a very inspiring issue.


I also wove a set with the colours reversed so that blue was the predominant colour. I altered the stripe width.


I decided that I would weave some handtowels to go with these lovely tea towels.


I love waffle weave and chose the same colours as the new napkins I wove in January.  Do check out my blog for December 2014 when I wove a set of waffle weave hand towels.


I used  Nialin which is a cotton/linen mix yarn equivalent to an 8/2 cotton. The waffle weave is on 7 shafts.
Sett: 24 ends per inch


Finish with a group of blue .

I wove several designs.  The first towel I wove as drawn in.  This was quite time consuming because colours had to be changed.  I used three shuttles.  The second towel I wove a border top and bottom of three blue stripes, two yellow stripes then three blue stripes. I wove the final length with an all white weft.  This is useful.  I had slightly miscalculated how much warp for each towel.  the final length is long but I can cut it in half and make two smaller towels.


I used a wide zigzag stitch on the sewing machine to hem the towels. Once hemmed the tacking stitches can be removed.

To wash the towels, I put them into the washing machine with my normal wash and then into the drier.

This weave structure makes very textured towels.  The shrinkage is as follows and is measured with the towel already hemmed.

There is a lot of shrinkage for this weave structure. The final towels are beautifully textured.


You can see from the picture that there is considerable shrinkage for this weave structure.   Both were the same size before I washed the top towel. However, the hand towels are very absorbent.


I also wove a narrow warp faced band to use as a hanging tab on the towels. I used the Nialin in the same colours. Here is the drawdown. There are 37 warp ends

I have really enjoyed making items for ourselves.  Napkins, tea towels and now handtowels.  What next?

What is on my loom - January

I live in the north of England and every year we go to Amsterdam on the local ferry for a couple of nights. The Opera, concerts and museums are wonderful.  On our trip two weeks ago, we visited Haarlem for the day.  The  railway station still has the old waiting rooms. 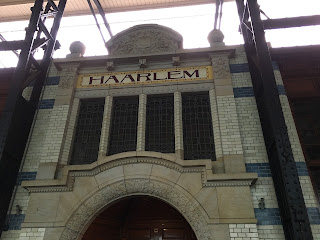 We wanted to go to the Franz Hals museum which we visited last year, but is well worth a second look. On the walk to the museum I passed a weaving shop. 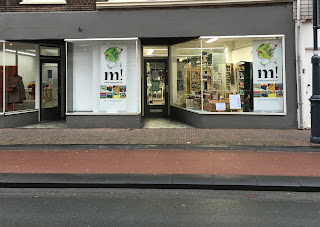 Unfortunately the shop was not open as it only opens on a Friday. This was very good for my soul as the yarns in the window displays were so very enticing and I might have been seduced into buying more yarn. My New Years resolution was not to increase the size of my 'stash' so I was pleased that the temptation could be resisted.

The shop web site is www.meervilt.nl   Do take a look.

The weather was very cold.  In the centre of town there is an old cafe which is a very popular. If you go to Haarlem, visit this cafe.  It is splendid and lovely and warm on a very cold day. 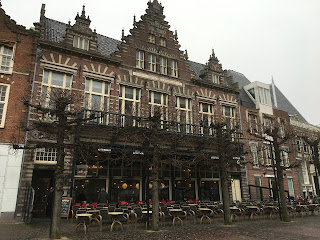 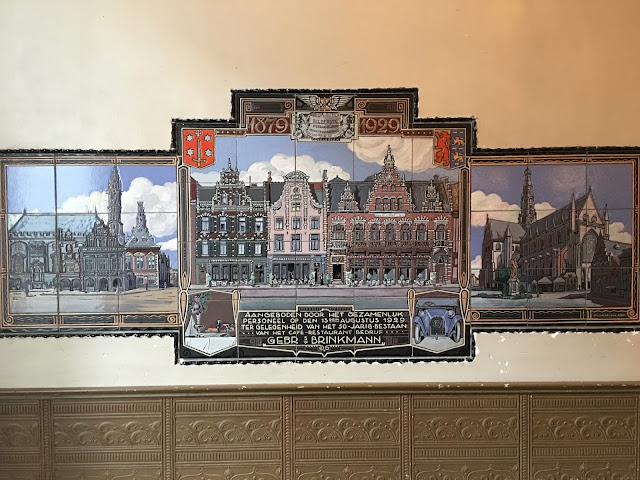 Weaving in January - a set of napkins.

But now on to weaving.

I have just completed a set of table napkins.  I used cottolin and plain weave.  The design is very simple - just a set of stripes in two colours. For tea towels I use a set of 20 epi but for napkins I used 22 epi.

Cottolin is a mixture of linen and cotton.  To iron, I use pressure to get rid of the creases in the cloth. Usually, it takes two or three washes and presses to make the cloth smooth.

My normal ironing board has a wire mesh underneath the cover and is not suitable for pressing.  I have found that this marble pastry board is perfect.  I can press very hard to eliminate the creases in the material.

A linen mangle from Denmark.


I visited Denmark a few years ago.  We stayed on a camp site outside Aarhus.  Whilst we were there, I went to an antiques fair in the town.. Normally, I do not check out antique shops but I was searching for a particular item.  In 1947, a wooden rigid heddle was designed as a tourist gift and I had read that it had been very popular. It had 17 long holes and 16 long slots so was made for 33 warp ends. It looks so lovely so I thought that I would search for one but no luck. I would have loved to have an old hand made item like this.

What I did find and buy was an old linen mangle.  It was difficult to carry on the bikes as we had not brought any large bags and the board and rolling pin are very heavy! It hangs on the wall outside my weaving room.  Linen is wrapped around the rolling pin then the board is placed on top.  The horse handle gives a good grip and the board is rolled to and from over the rolling pin.  This presses the cloth.