Travels around the Baltic: Lithuania and Estonia

I had been advised to visit the Open Air museum near Kaunas situated on the lakeside in Rumšiškės. It was established in 1966. Do check out the web site for information in English.  It has an extensive collection of traditional houses. http://www.llbm.lt/en/about-us/

The only booklet on sale was a small one for children but it had lovely colour illustrations of different costumes.

In the centre of the site is the town with a collection of beautiful buildings.


Surprisingly there was a second hand bookshop in the village square. This was a real find and the stock was extensive.  I found one old book about band weaving.  It does not have many colour illustrations but lots of black and white pictures of bands.

We stayed in Kaunas for a few days. Kaunas became the temporary captital of Lithuania when Vilnius was taken over by Poland. This is a delightful small town with an old center with historical buildings. To my delight there were a few shops which had some bands for sale. You will recognise one of these bands from the Braid Society workshop notes for week three.

The capital Vilnius was a fascinating city to visit.  We used the local bus to travel to town and entered by a beautiful old gateway. On one day on our way home we found that there was a special service for a group of pilgrims at the church above the gateway. 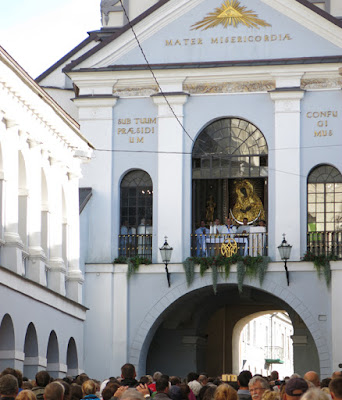 The National Museum was a must-see and I was thrilled that there was a special exhibition of costumes from a theatre production of 1971.  They were beautiful and many had lovely woven belts.

The small booklet about the exhibition had photographs and the original costume designers drawings. 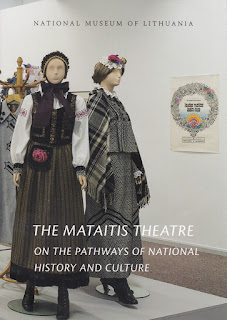 The theatre was set up to celebrate Lithuanian history and culture from the 18th to the 20th century. the costumes were stunning.  This is the web site for the ethnic collection in the museum. http://www.lnm.lt/en/ethnic-culture/

I found a couple of craft shops but the only bands I saw for sale were tablet woven.  One shop had a beautiful patterned band in red and white but the pattern did not look like a traditional Lithuanian one. It was advertised as a Baltic region belt.

We left Lithuania and travelled through Latvia on our way to Tallin.


We could walk to the centre from the camp site and this time visited house of Peter the Great which is now a sumptuous museum. http://linnamuuseum.ee/en/peetrimaja-eng/  This has been restored with great care and the exhibitions were fascinating.

In the grounds of the park there is the wonderful Kumo Museum of Modern Art.    https://kumu.ekm.ee/en/


This is an iconic building near the song festival grounds.I was most interested in an photographic exhibition which featured Tõnis Vint who helped make the film about the Lielvārde belt from Latvia. My Youtube video on how to weave complex motifs from this belt can be seen on https://youtu.be/t9Dekjt8uog

In Tallin I was disappointed to find that some of the tourist shops I visited on my previous trip no longer sold woven bands.  However, the Estonian Folk Art and Craft Union shop was still there and flourishing. The shop now two additional branches so there was a lot to see. If you visit Tallin, make sure you visit these outlets.


One of the new outlets had an excellent collection of books including a lovely book of Lithuanian bands.

To get to the shop involved clambering up and down steps to the basement.  It was worth the visit.


In Helsinki on our next stop I saw this poster - unfortunately the performance was later in the year. the band is lovely. 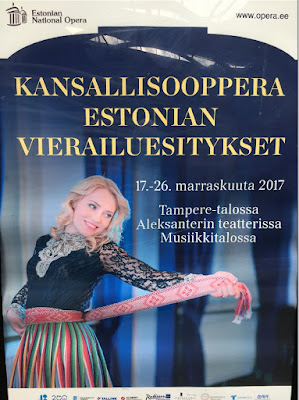 It was a superb trip.

Handwoven belts in the Baltic and Scandinavian countries are an engrossing area to study. There are also other countries which have a handwoven tradition of narrow bands. Belarus and Ukraine also have a weaving tradition.  Here is a beautiful Ukrainian belt I have just bought from Elena who wove it.  it arrived a few days ago and I am still admiring the work that went into producing this lovely belt. 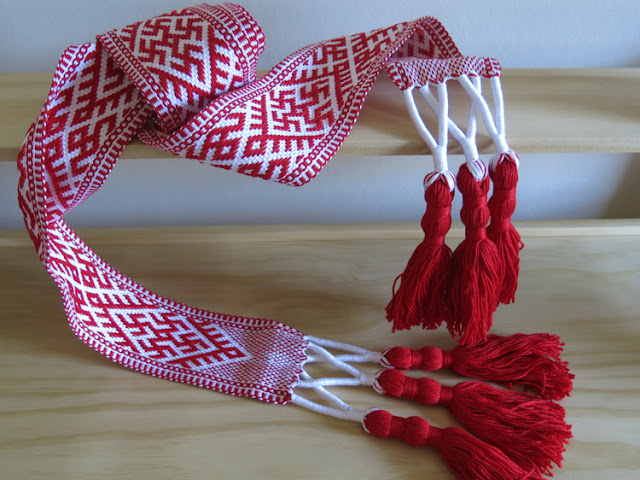 It is a striking design and almost identical to the one I saw in Vilnius but this belt has a beautiful set of tassels to finish.

I hope you have enjoyed seeing some of the beautiful sites and textiles from these Baltic countries.  It was my first visit to Lithuania and will not be my last. The workshop gives examples of some of the wonderful woven bands from the area.

Do check out my Pinterest site as there are many examples of patterned bands from around the Baltic on the boards. https://www.pinterest.co.uk/DurhamWeaver/

Travels around the Baltic: Finland

Lappeenranta  is in the east of the country.  We had booked a canal trip on the Saimaa Canal to Viborg (Viipuri)to see the Alvar Aalto library.  It was stunning and we had a fantastic guided tour around the library.
Lappeenranta was a small but interesting place.  On the headland is the old ruined fortress. The old buildings have been preserved and include artist workshops, the oldest orthodox church in Finland, completed in 1785, the Museum  and the Art Museum.  I loved the craft shops. 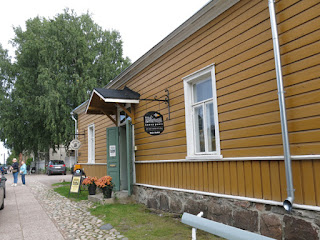 This lovely building had shops and a fantastic tea room. 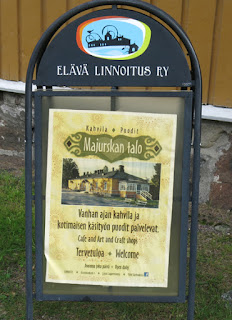 The food was very tempting and we stopped for a meal. 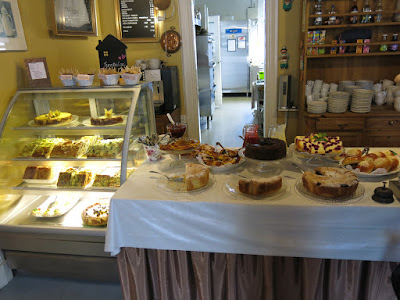 The craft shop was a gem.  http://www.kaantopoiju.fi/There were some lovely hand woven items and I was very tempted.  The facebook page shows lots of examples of lovely Finnish textiles.
https://www.facebook.com/galleriakaantopoiju/ 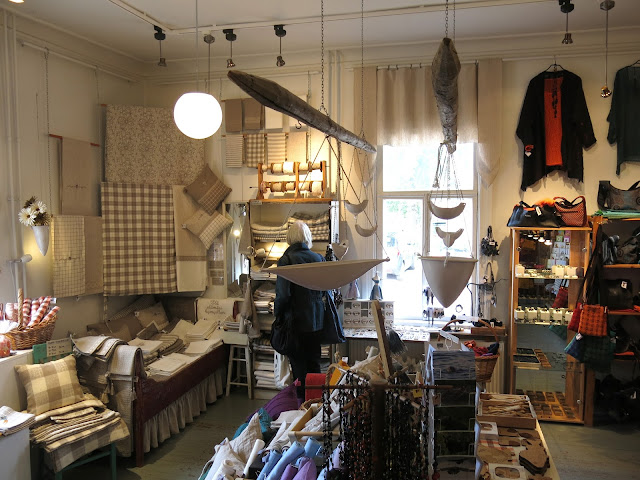 I had a long chat with Leena.  You can see the beautifully dyed garments n the picture.  She lives in the countryside outside of Lappeenranta  and uses natural dyes inspired by the beautiful woods.   Here are her autumn/winter tops which had just been completed.

Further on were the two museums which had some lovely displays. There was one costume from 18th century Kakisalmi which shows a felt hat and a sprang belt. the cape is wool frieze with linen trousers and felt shoes.  The mittens are made using the nalbinding technique.

In Helsinki we visited the Open Air Museum.  Unfortunately by this time it was nearing the end of the season. However, there were still some people demonstrating crafts.

There were still guides in costume and I was particularly pleased to find someone weaving. 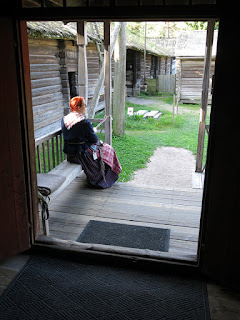 There was also a rigid heddle on display although not in use. 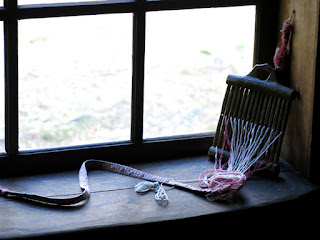 Here is a close up of the cotton band.

In Helsinki, I had arranged to see some of the collection from the National Museum behind the scenes.  I cannot show you my photographs but I was thrilled to be able to examine some of these bands.  I hope to start analysing them and weaving samples in the new year. The curators were very helpful.  The National Museum was in the process of rearranging the galleries so there was very little in the way of traditional bands on display.

At Turku, there was another open air museum near the town centre. Again, som eof the crafts people who work there had finished for the season.  The loom was empty and the heddles and shafts had been removed for the winter. The smaller loom was still in use. 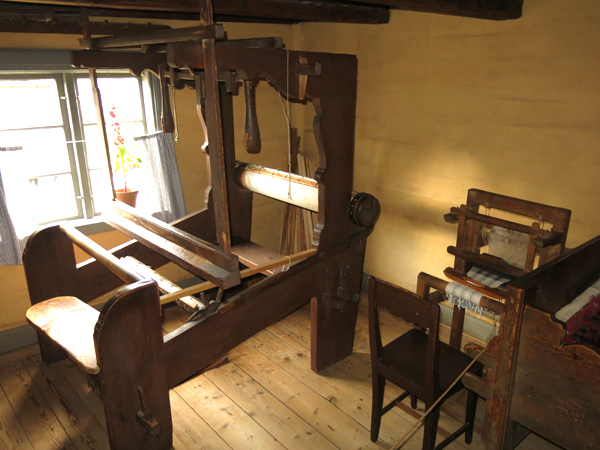 There were guides in costume to explain the different displays in the open buildings. 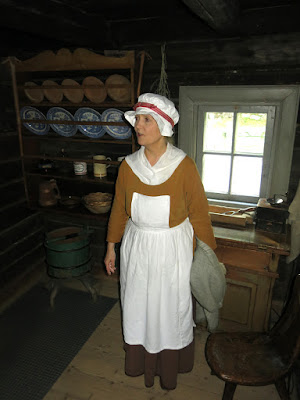 The inside rooms were very dark so it gave a realistic feel for how it would have been for the original inhabitants.  Unfortunately, the low light levels made it difficult to get decent photographs.  This guide is wearing a cap with a woven band. 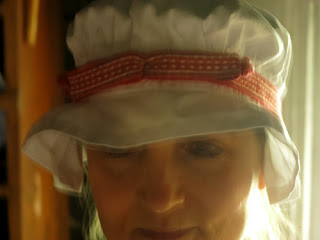 I tried to take close up photographs but this is the best I could do. It is a warp faced plain weave band rather like the one on the heddle in the Helsinki open air museum. One of the more interesting sets of rooms for me was the passementerie workshop.  It was closed but the view through the window showed a wide variety of equipment for making braids.

When we go back to Finland, this is another 'must see again'. Finland is a beautiful country and I have only given a short over view of some of the weaving related items.  The architecture, museums and people are wonderful.  Do visit if you can.

Here are some additional pictures about Alvar Aalto. We have now visited most of his buildings and museums in Finland as well as the famous library in Viborg, Russia. The canal trip from Lappeenranta to Viborg was amazing.

The renovation of the building was assisted by architects from many countries.  https://en.wikipedia.org/wiki/Vyborg_Library

The furniture, all designed by Aalto, has been donated by well wishers. The guided tour that we had was excellent.  The guide, who is one of the librarians, was very knowledgeable and brought the history of the restoration of the building to life with his talk. It was one of the best guided tours we have had.

I have long admired the stool. They stack so beautifully.  We were tempted and gave in to buying one from Artek in Helsinki.  Thank goodness for the motor home!

Posted by Durham weaver at 06:00 No comments: