The Online Guild of Weavers, Spinners and Dyers.


I am a member of the Online Guild of Weavers, Spinners and Dyers. This wonderfully enthusiastic group has monthly online workshops and a membership from around the world.

To find out more details about the Guild click on this link  http://www.onlineguildwsd.org.uk/

Details on how to join the Online Guild are given on the web site.


Do check out the web site and look at the gallery which shows the work produced by members in previous workshops. The annual subscription is very reasonable and you also receive the Journal four times a year. The Journal can be viewed at this link http://www.thejournalforwsd.org.uk/


This month the workshop is a weaving challenge which I could not resist.

Ann Sutton in her book 'Ideas in Weaving' describes a design game. She has a set of cards which are divided into categories such as  material, colour, weave structure, and design feature. It is this design game which is the workshop. Everyone wishing to take part in the design challenge was given three 'cards'.

It is a challenge for me but also, for the large number of workshop participants.  It is fascinating to read the other combinations of cards and see how the different challenges are met.  I am learning a lot by reading other peoples comments and the pictures that they post on the online web site. Members of  Online Guild have a wide breadth of interests and expertise.

Here are three three 'cards' which I was given.

I had to think carefully how to interpret my challenge. A few years ago I experimented with collapse weave. Plain weave and fine threads can be an option. I thought of waves with their white tops and decided that this would be my inspiration.

Sett wool at 24 epi and silk at 32 epi.  Sett at approximately two thirds of plain weave sett. I used a 12 dent reed so that the wool was sett at 2 ends per dent and the silk at 2/3/3 ends per dent.

Six shades of silk are used.  The dark silk is in the centre and the silk shades lighter towards the edges of the piece.

The wool warp is 110/2 merino wool. These slightly thicker warp stripes in wool should give pleating which will look like white tops to waves.

Here is the piece being woven.  I use a stretcher to keep and even width for the piece. I used eight shafts, four for the wool areas and four for the silk areas.

I used the rest of the warp to weave a scarf.

The silk ends were plaited together in groups of three – one plait for each stripe.
The wool was loosely plaited and tied off longer than the silk plaits. I hope that the wool would felt slightly so that I could cut off the knotted end to make a neater fringe for the finished scarf.

I was surprised that the width of the scarf after machine washing was narrower than the width of the sample.  The scarf and sample were both washed at 30 degrees in a normal washing machine cycle with other garments.  I was expecting that the lengthways shrinkage would be less for the scarf.

I have decided to try another warp using more silk stripes and narrower wool stripes.  I have yet to discover what will happen. Collapse weave is a wonderful adventure.  Exploring the possibilities are endless.

When Anne was writing this book, I had long conversations with her about aspects of collapse weave. I was particularly interested in the mechanics of tracking and we spent some time analysing the effects and why it happens. She used one of my samples and two of my scarves in her book.
One of my scarves had won third prize in an Handwoven competition in 2004.  Inspired by fleeting clouds, it had a double weave collapse structure. 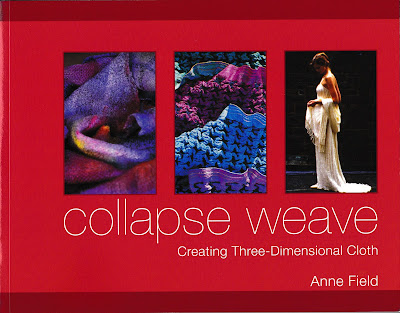 I have just bought a new band weaving book from Finland. Check out my blog pages for the details. It is called Traditional Finnish Decorative Bands  and has illustrations of bands in the National Museum in Helsinki.  It is a reprint in English of a book first published in 1903.

This book is available from http://www.salakirjat.com/

Email ThisBlogThis!Share to TwitterShare to FacebookShare to Pinterest
Labels: collapse weave, Spinners and Dyers, The Online Guild of Weavers

I am often asked when I became interested in band weaving.  In 2007, we had a wonderful holiday in South America and visited Peru.  I found the Centre for Traditional Textiles of Cusco. This wonderful shop and museum was inspirational.
I had tried band weaving before but had been very unsuccessful.  I always show my very first attempt at band weaving when I am teaching workshops. It is a very uneven scrappy piece.  It has 17 pattern threads and is made of linen. I found it so hard that I gave up trying to learn band weaving.

After seeing the lovely work of the weavers, I decided to try band weaving again once I arrived home. Band weaving is an absorbing hobby.  The patterns seem infinite in variety. 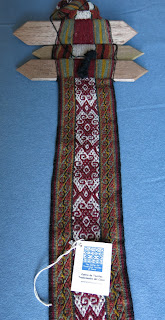 This is a small back strap with the warp and some of the completed weaving.  It makes a pretty wall hanging.


Here are some more bands which are called chumpi.

These bands were a revelation for me.  I was intrigued by their complexity and wonderful  use of colour. I had forgotten that it was only nine years ago that I really began to study band weaving.  It feels as though I have been doing it as long as I have been weaving.

When I started to learn, most of the patterns that I found were from Scandinavia.  I had to find out more about them so we visited Sweden to explore museums and collections.  I had not realised that this was only the start of a long journey of discovery.