The Braid Society is a fantastic organisation for anyone interested in narrow wares - braiding, plaiting, band weaving, tablet weaving, sprang, etc.  There is a public discussion group on Facebook at https://www.facebook.com/groups/BRAIDSandBANDS/

There is also an on line discussion group at  https://groups.io/g/braidsandbands  Do join.  It is a wonderful forum for finding out about different crafts to do with narrow wares.

It was founded in 1993 and has members around the world.  The aim of the Society is to promote the education and practice of the art and craft of making constructed or embellished braids and narrow bands. 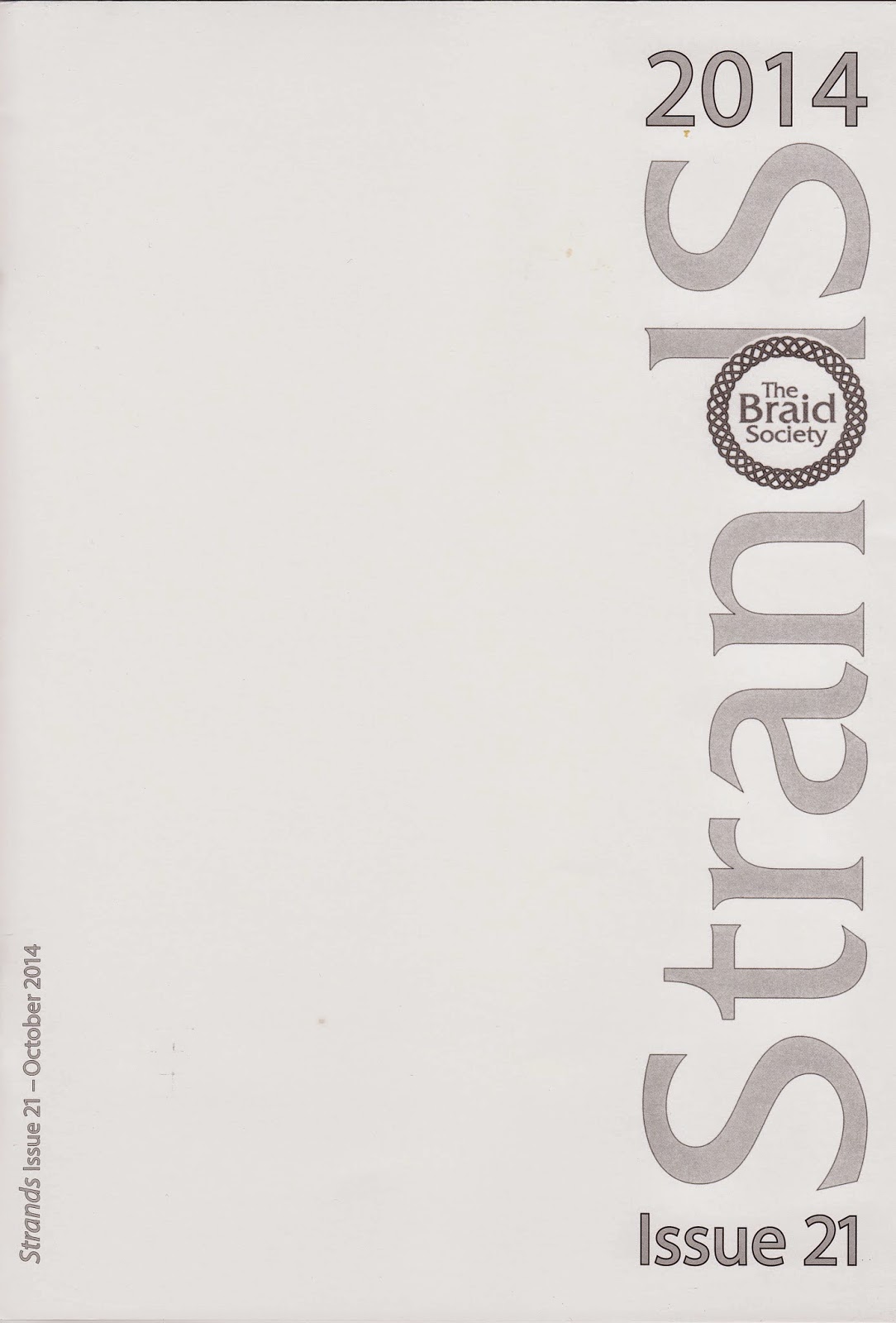 I have just received their latest annual journal Strands.  I always look forward to it as there are so many different craft interests and so many interesting craft practitioners.

This edition is no exception. 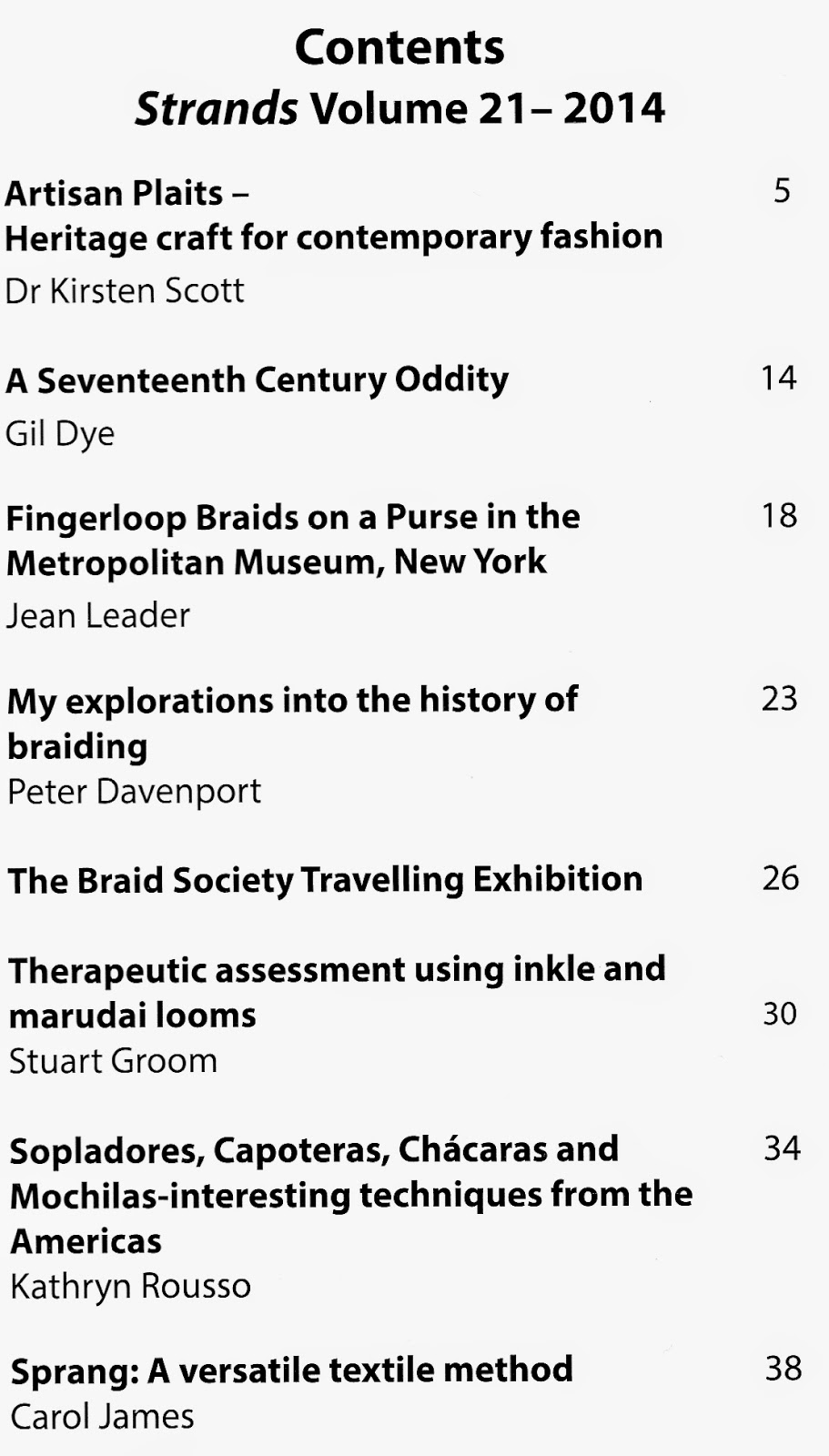 Here is the contents page of the Journal.  Interests range from plaits, lace,  finger looped braids, reed and rush plaiting - so many techniques and, I sometimes feel, so little time to explore them all.

I am particularly interested in any article about the history of narrow wares and their production. This exploration by Peter Davenport is no exception.

All the articles have colour photograph illustrations which bring the techniques to life.


Membership of the Braid Society is easy.  Just go to their web site at http://www.braidsociety.com/
Do think of joining.  It is not expensive and you gain so much from the web site, newsletter and Journal and online discussion group.

The last Braids Conference was held in Manchester UK in 2012.  There were many workshops to choose from and people came from all over the world.  The previous Conference was in Japan and the next will be in Tacoma in the USA.

I will be running another workshop early next year for Braids and Bands.  As you know, one of my passions is band weaving.  I have been exploring the band weaving heritage around the Baltic region.

As part of my trip, I attended the Weave Fair in Umea and met Per Niila and Lotta from Stoorstalka. They had been asked by a Sámi weaving tutor if a new design of heddle would make the traditional

Sámi bands, which use groups of floating pattern threads, easier to weave. They worked on this idea and put a new design out to test.

My previous online tutorial in 2012 looked at how to weave this style of band.

In traditional Sámi weaving, the floating pattern threads go over the top of the heddle. In order to pull them down, string heddles have to be used.


As a result of this request by a Sámi weaving tutor, a new heddle is now on sale for weaving these type of bands. It is called the Sigga heddle.  The background threads weave plain weave and are threaded alternately through a slot and hole.  The pattern threads have their own shorter slots.  It works in the same way as the Sunna heddle. 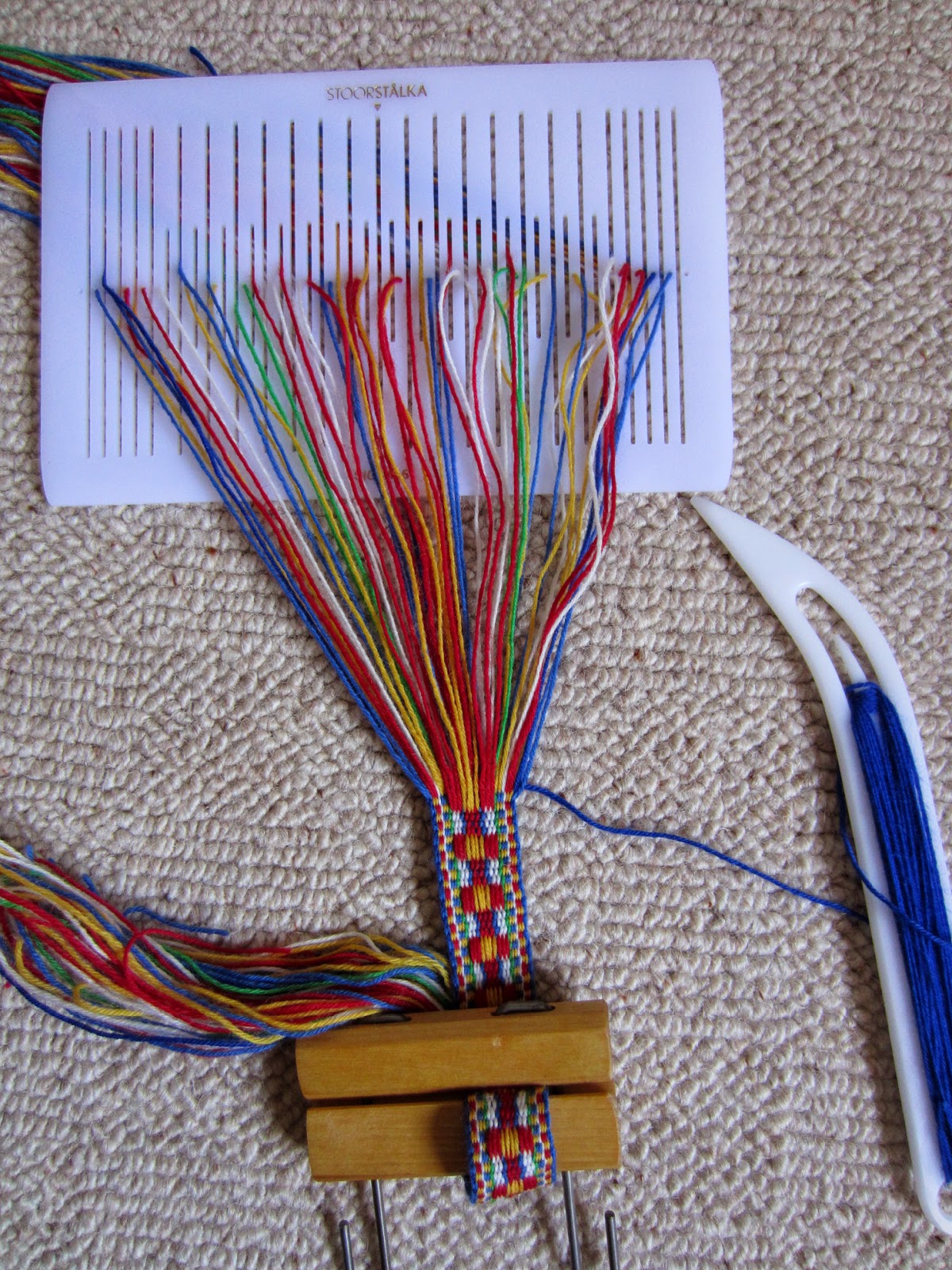 Early next year I will be organising another online workshop for Braids and Bands looking at how this heddle makes this type of weaving so much easier.

I have started to trial the heddle and it really does work well. I will be busy weaving different examples for use during the tutorial next year over the next few months. This band has one group of ten 'jumping' pattern threads

I was asked for the proper weaving term for the supplementary warp pattern threads but I think the term jumping pattern threads is so much more evocative.  They do seem to jump up and down on the band.

Here is an example that I wove for the previous tutorial.  This band has two groups of jumping pattern threads. I love this Sámi design.

Posted by Durham weaver at 11:05 No comments:

What is on my loom: a scarf

Like most weavers I have a large stash of yarn.  I am trying to reduce it but I keep getting seduced by glorious colours or new types of yarn. 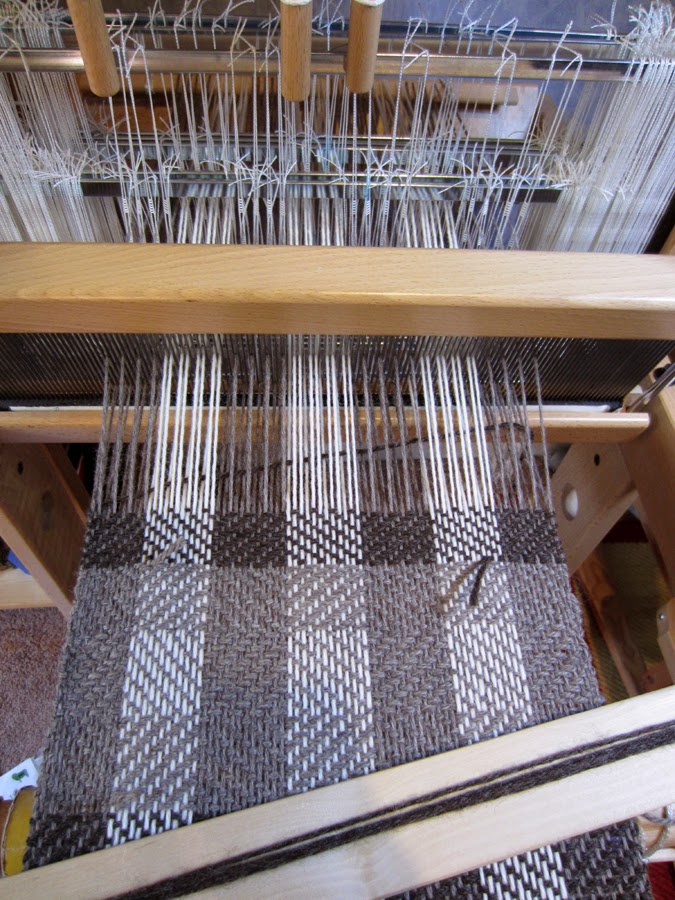 At the moment I am weaving a scarf on my table loom.  The yarn is a 3-ply worsted yarn which I bought a number of years ago in the Falkland Islands.  It is naturally coloured pure wool and I could not resist buying some, even though I had to squeeze it into my hand luggage. 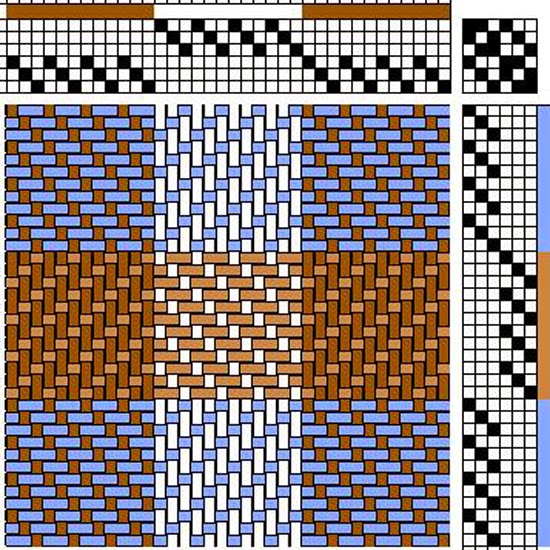 The weave structure is a simple 2/1 block twill. I only had three balls of yarn so I had to be careful in designing the pattern and the length of the scarf.  The wool is beautifully soft.

On my Megado loom, I am weaving more tea towels.  Before I go away on holiday, I always put a warp on the loom so that I can weave as soon as I get back home.  Usually, I put on a complicated warp because it takes much longer to make the warp and thread it.  However, I had been weaving tea towels to take with me as presents and I still had one design that I wanted to try.  I have woven enough tea towels now.  I always plan what I wish to weave next whilst I am weaving.  I find weaving so relaxing. 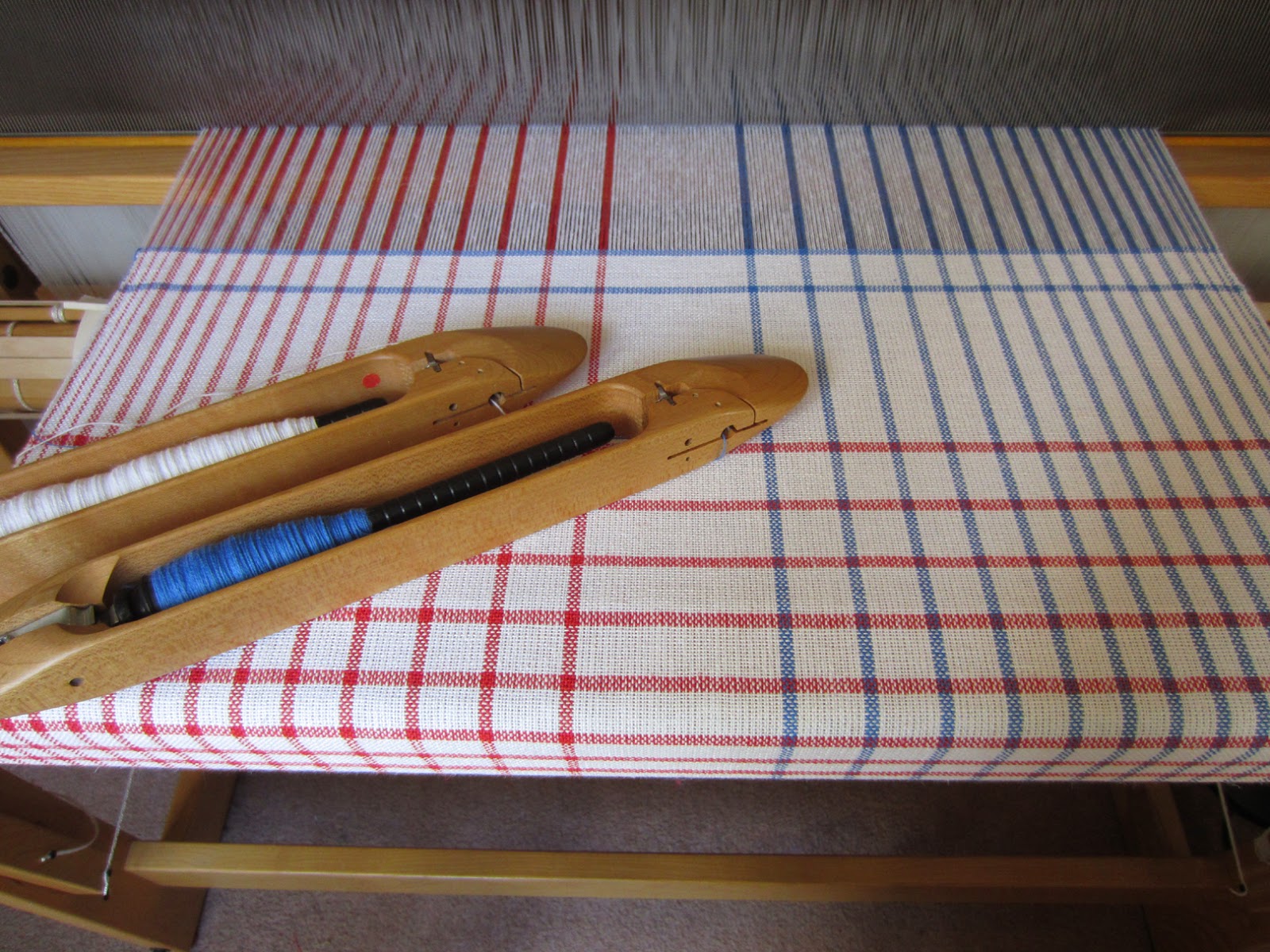 The tea towels are woven in cottolin in plain weave.  It is woven as  drawn in.

The design is my interpretation of a set of tea towels I saw in a museum in Den Haag last summer. We had visited the Gemeente  Museum to see the work of Gerrit Reitveld and the De Stijl movement. The architecture, art and furniture design were fascinating but there were also a few examples of textile design from the same period.  The towels had a simple striped warp pattern of white,blue and red.

On my Swedish band loom I have just finished a set of self coloured bands.  I will be showing you what I am using them for next month.

Posted by Durham weaver at 14:24 No comments:

Sámi weaving at the Weave Fair

Umea is European Capital of Culture for 2014.  Their plans for the year were based on the Sámi year of eight seasons.

I was looking forward to seeing contemporary Sámi culture as part of the Weave Fair and the accompanying exhibitions and events. 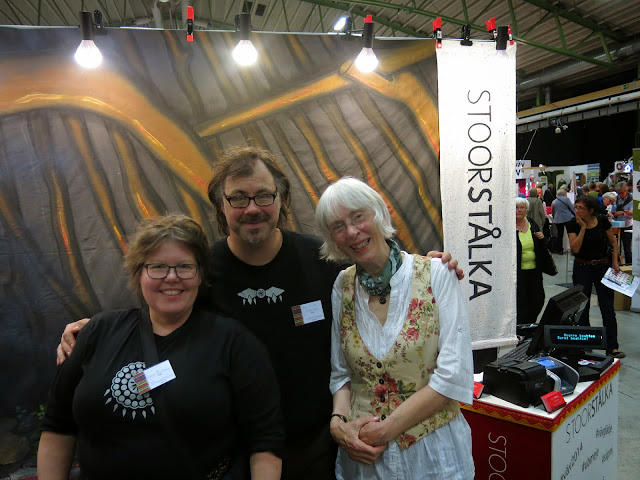 I was thrilled to meet Per Niila and Lotta for the first time.  They are Stoorstalka who make the wide selection of heddles which make patterned band weaving more accessible to people all around the world. Click on his link to see their web site. http://stoorstalka.com/


I had found their web site quite by accident and discovered that they had made a double holed heddle for a weaver.  I wrote to them to ask if they could make a double slotted heddle.  These heddles are not widely available and even standard heddles are not easy to find in the UK. I can now teach band weaving using this design of heddle which makes learning to weave patterns so much more straightforward. Their stall was beautiful. 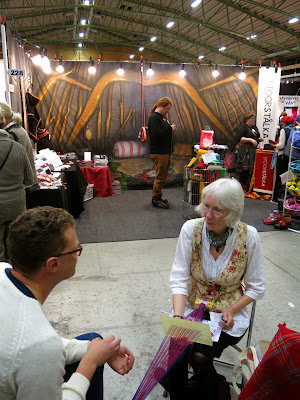 I had the chance to relax and do some weaving. 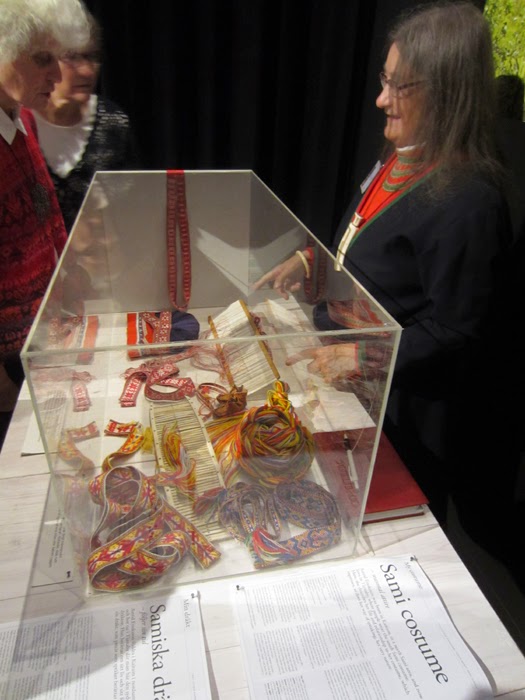 At the Weave fair, Astrid Enoksson, who lives in Tarnaby, had a display of display of Sámi costume and weaving and was on hand to answer questions.

There is an article about her in Vävmagasinet nr 3, 2014 pages 40 - 41.  She was also part of the cultural show of Folk costume at the Västerbottens Museum. 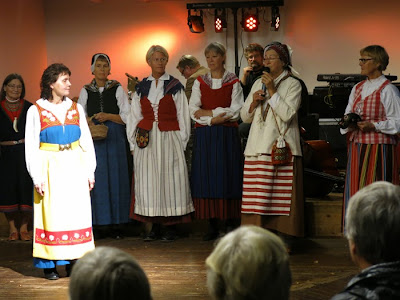 The Västerbottens Museum has a large open air section of traditional buildings where the costume show took place. 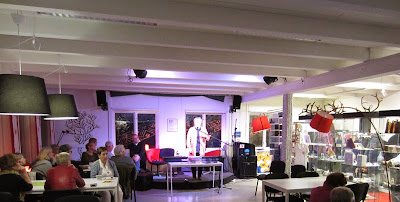 Later that evening at the nearby Sámi Cultural Centre, a singer demonstrated  joik, a traditional type of Sámi singing. 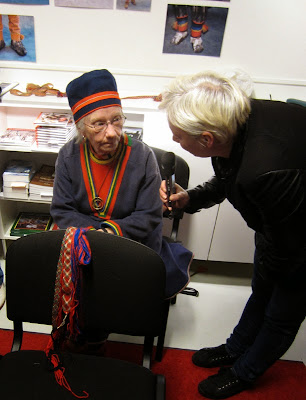 There were also a number of weavers on hand to demonstrate different techniques for producing bands.


There was considerable interest in this.  Here is one weaver being interviewed for a radio programme.


On the Saturday, there was an 1860's market at the Västerbottens Museum. This was a superb event with all the stallholders dressed in costume and an astonishing variety of stalls selling handcrafted articles and food etc.  It was very fortunate that the weather was perfect. There were many stalls and many beautiful things to tempt buyers. Here is a sample. 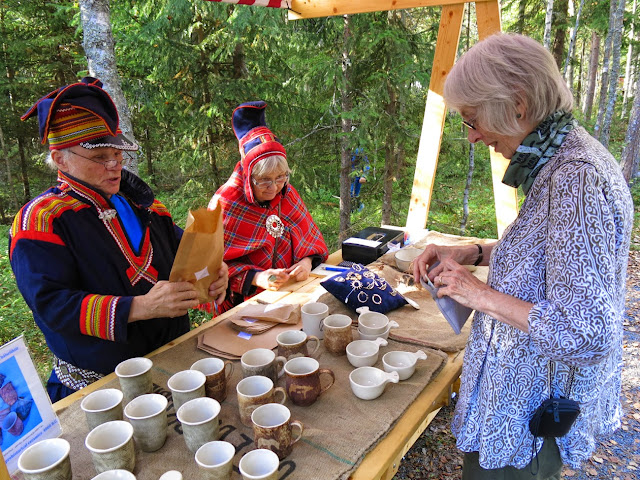 There was also a Sámi stall selling reproductions of prehistoric Sámi pottery. 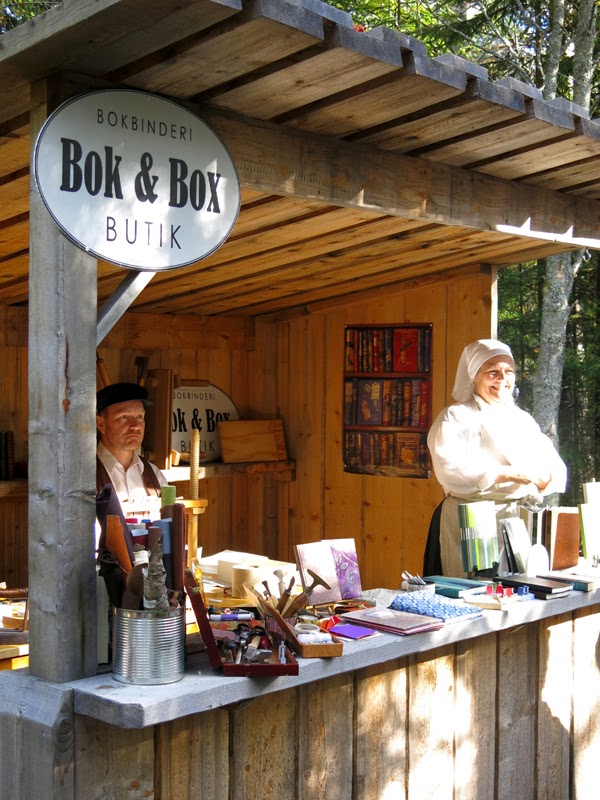 It was an excellent three days. I am now looking forward to the next Weave Fair in three years time.

Posted by Durham weaver at 17:15 No comments:

I have just returned from my trip around the Baltic.  I had planned the journey to see band weaving in different countires and to attend the Weave Fair in Umea, Sweden.

At the Fair, I had a really enjoyable time meeting old friends and making new ones, as well as shopping!

The entrance was very welcoming with the bright colours and patterns.  I had made a bag to take with me on my trip and advertise the Fair.  I had not realised that bags would be for sale. They were produced by a company that specialises in hand printing.  Each bag was unique because of the way that it has been made out of the roll of cloth. They were made from printed cloth by Froso Handtryck, who had a stall at the fair. 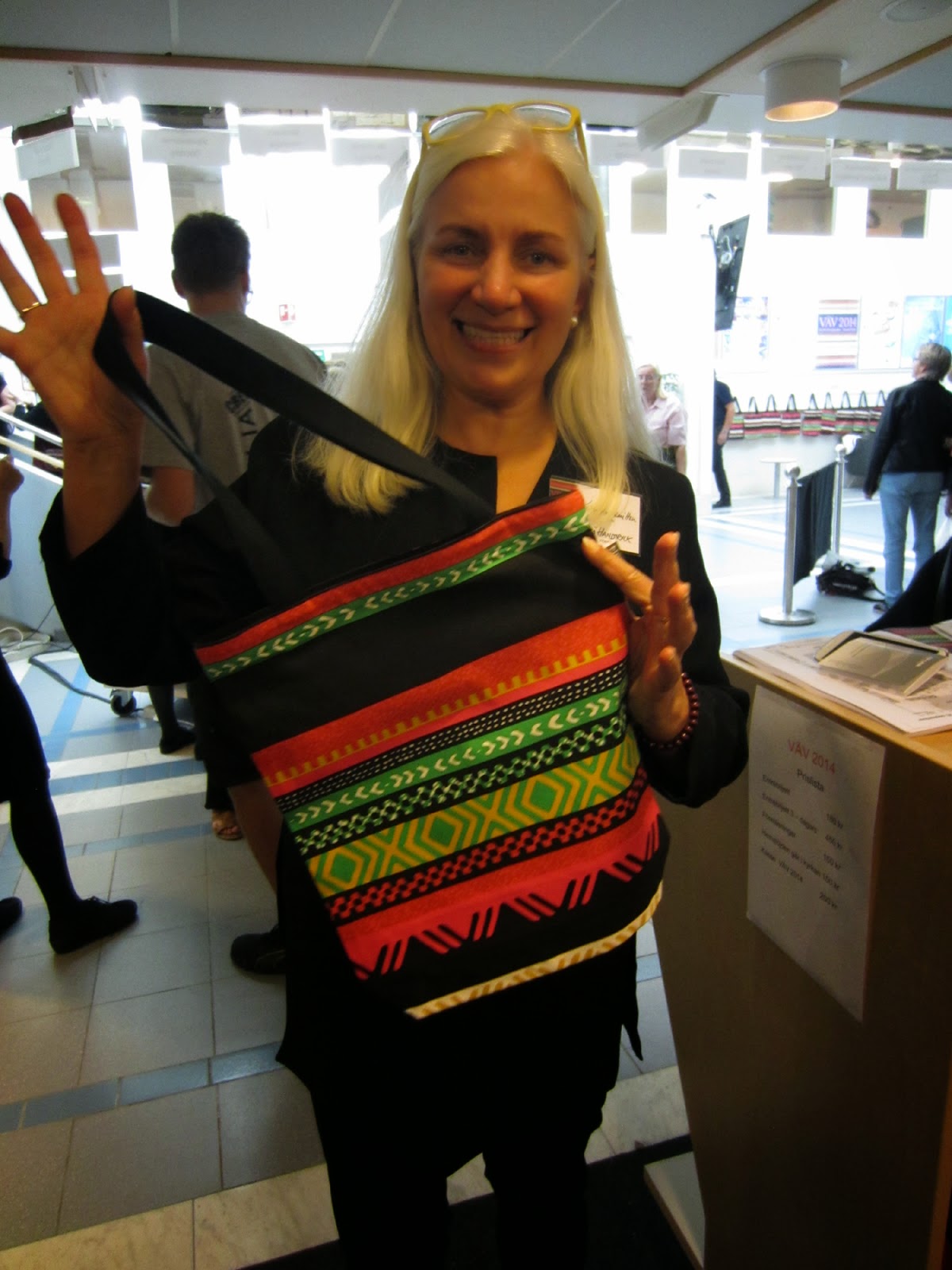 Here is the designer showing one of the bags.  It is  lovely souvenir to represent the Weave Fair. 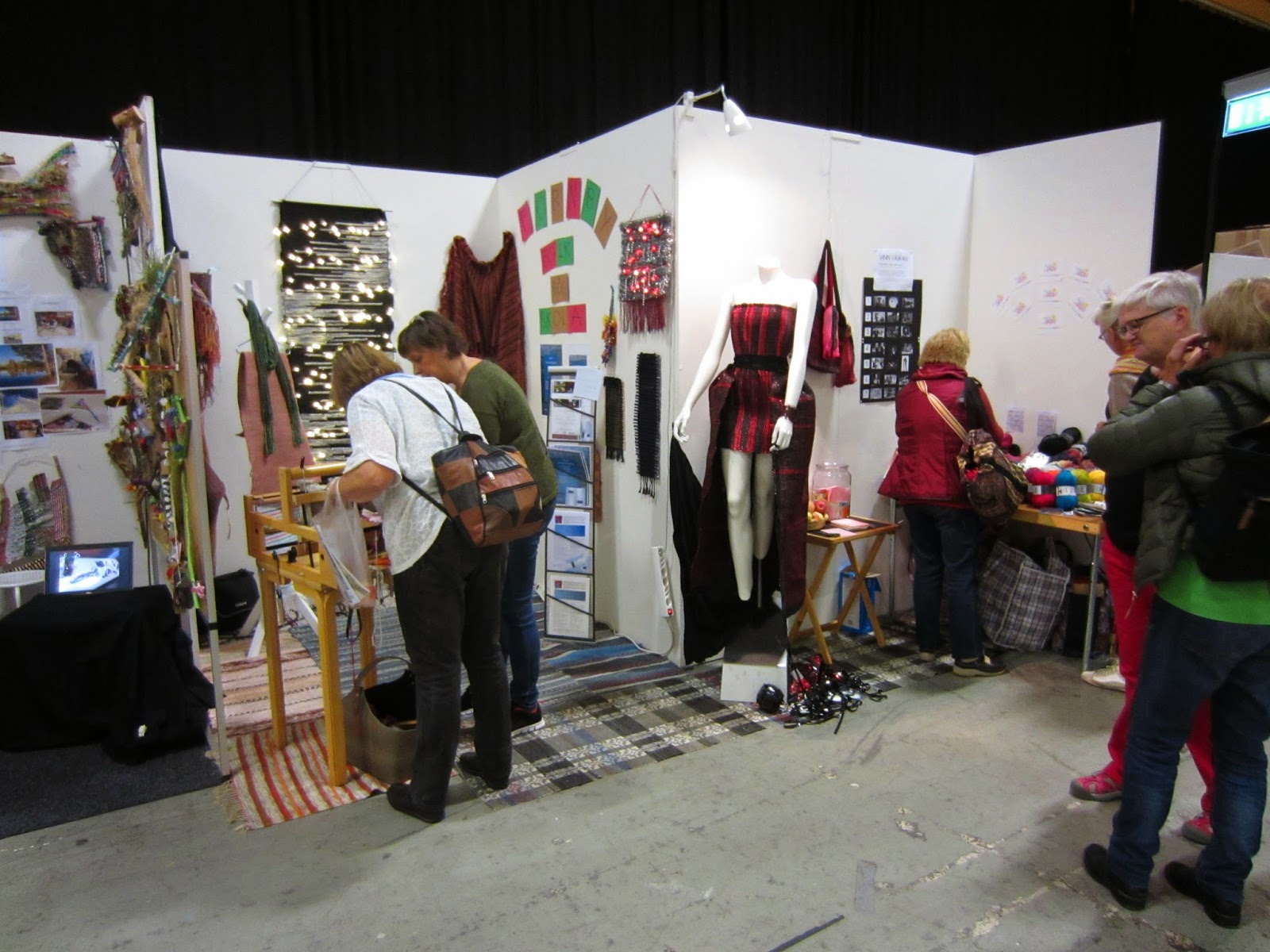 The entrance corridor was festooned with the bags and the way to the Fair hall had a wonderful selection of weaving from local weavers. 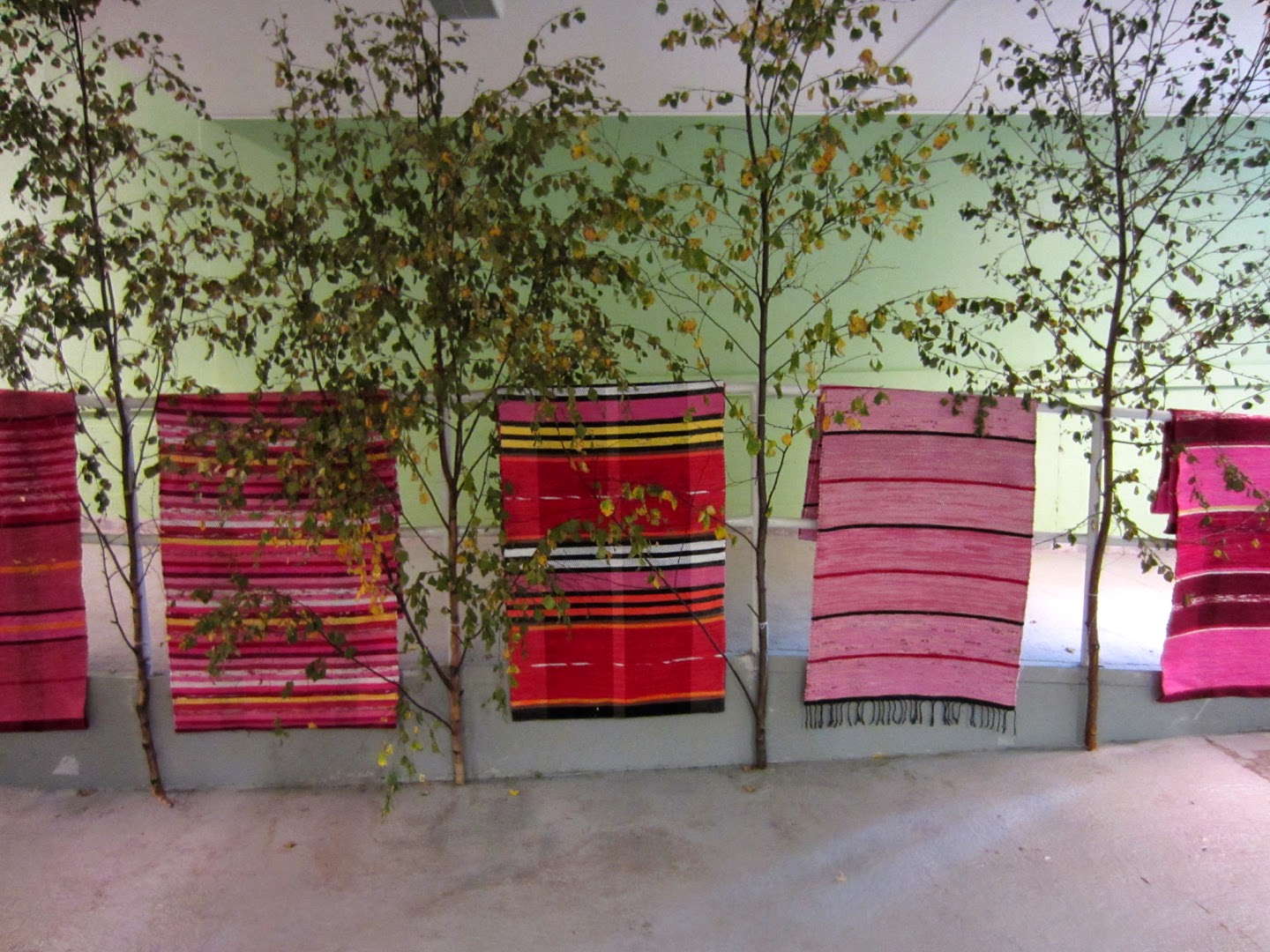 A connecting corridor had an imaginative display of rugs. 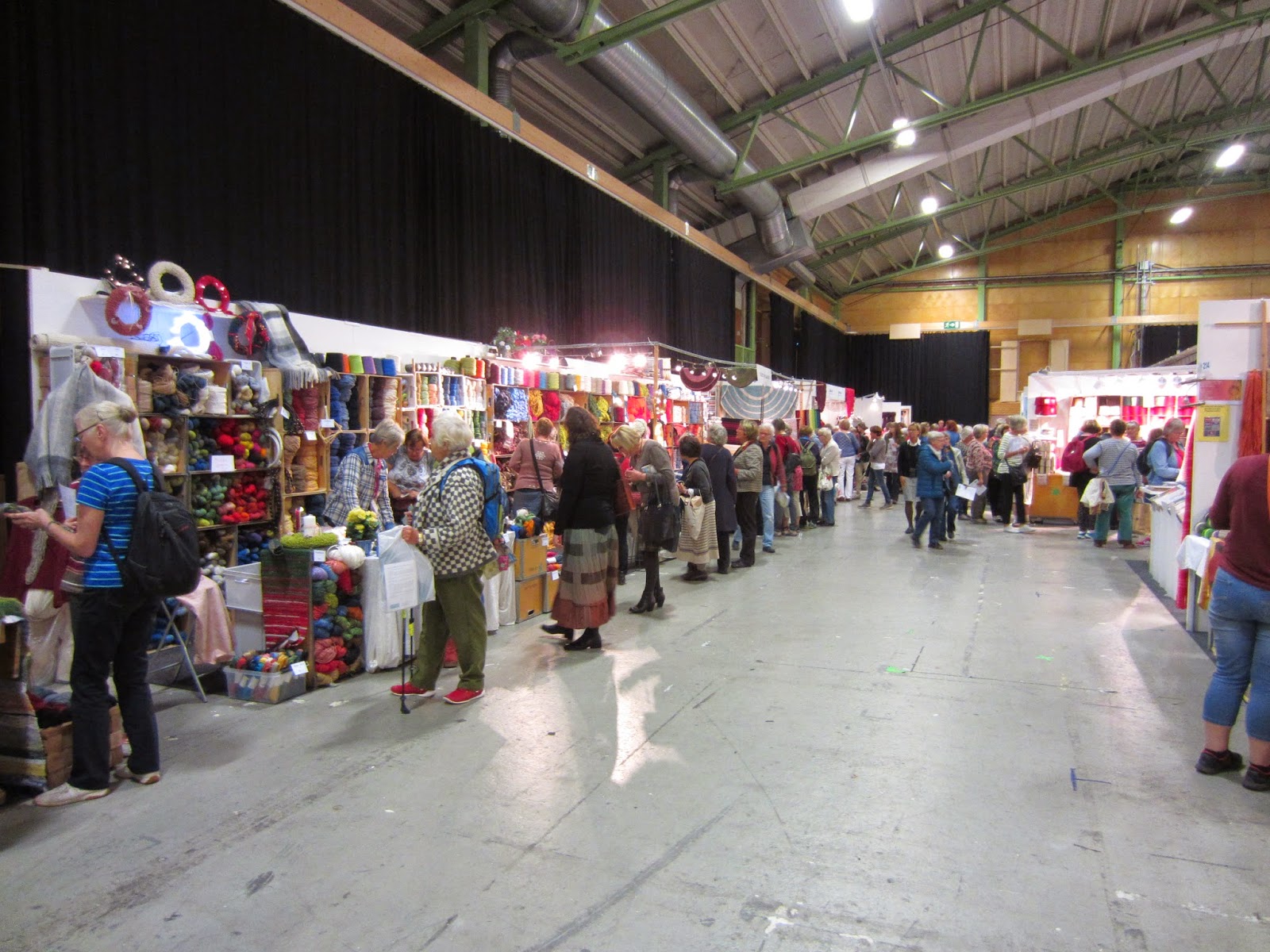 Arriving early was a good idea as it was easy to get around and to have a detailed look at the stands. Here I met Eva who has just moved back to Sweden from the UK.  I met her at the Derbyshire Guild when I took a workshop there in June.  She is working on the Saterglantan stand.  Of course I was tempted and bought some useful band weaving equipment not available at home.


I also met Ruth from the USA.  She has only been weaving a few years but is very enthusiastic.  She brought her file of Sámi bands that she had woven from my first book, Sámi Band Weaving. She had completed all of them - a labour of love and determination! She told me that she was still finishing the final band the day before she was set to travel.  It was such a thrill to be able to see her work.

My friend Tamaki had traveled all the way from Japan to attend the Fair. I had decided to relax with by weaving with Johan from Stoorstalka.


I also met Marie from Vav Kompaniet.  Their first book had just been published, written by eight of the group. It is in Swedish. It is a lovely display of different craft projects with beautiful illustrations.
Vav Kompaniet supply the lovely carved heddles with horse heads, birds and hearts that I bought from them at the previous Weave Fair.  These are made by Åke Erlandsson, who is still enjoying making these lovely items at 80 years of age.

I hope you have enjoyed a taster of the Weave Fair. It is well worth the effort of going such a long way. I will be posting another item about the Fair later. I have only been home for three days and there is so much to catch up with!

Susan
Posted by Durham weaver at 10:54 No comments: