What is on my loom: September

Weaving Scarves for the Autumn Season.


Some years ago, I bought three cones of baby alpaca yarn.  It is very fine and weaves beautifully.  It was a 'mill end' so I cannot buy any more.  The only label inside says Inca Tops which is not very informative but it is from Peru.

I had to sample the yarn to find out what sett to use.  I found that using a sett of 24 epi for a Huck Lace threading it works beautifully. 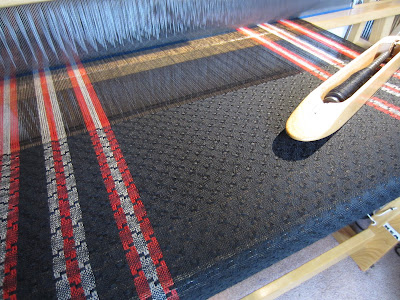 Warp and weft 2.28 alpaca in black with red and grey for the stripes.

Sett at 24 epi for huck lace

I tried two samples - one in all over lace and one in spot lace with plain weave squares.  The second looked better. The weave draft is given below.

I only had smaller quantities of the red and grey left so I used them in stripes at the edges of the scarf for emphasis.

The plain weave border is sett at three per dent in a 12 dent reed so that the border would be tighter. 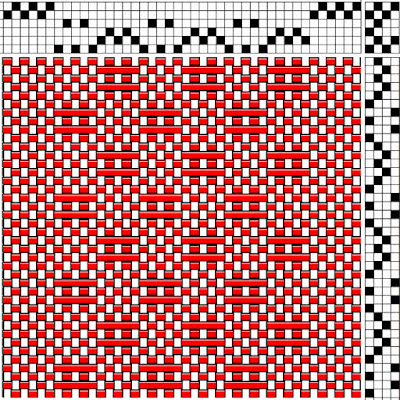 The Huck lace patterning gives a lovely drape to the scarf and the yarn is so soft and cuddly.  Just the thing for colder weather. 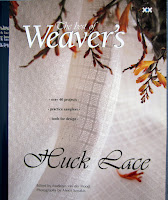 The book has some basic theory for weaving and designing drafts. There are many projects and ideas for how this lovely weave structure can be used to best effect.

Email ThisBlogThis!Share to TwitterShare to FacebookShare to Pinterest
Labels: scarves


The Association of Guilds of Weavers, Spinners and Dyers Summer School, part two


Th second workshop built on the skills acquired on the first.  Four new students arrived to take the place of four who booked only for the first workshop. 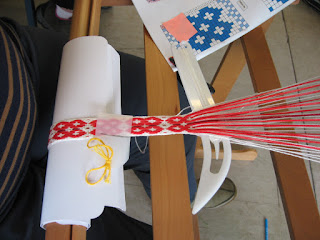 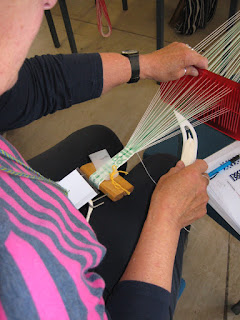 On the final day, there was a display of student work. I wish that I had taken more photographs, but I was so engrossed in the teaching that I kept forgetting to take out my camera. 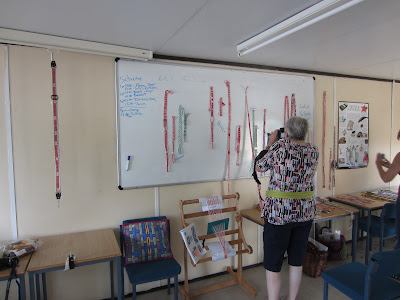 Barbara took many lovely pictures of the woven bands.  Here is a selection.

The woven bands were pinned up on the wall.  Each band told the story of the week.  From first hesitant beginnings and wobbly edges to neat crisp patterns by the end.

The students worked very hard and gained the skills to carry on their interest in this lovely craft.

The band on the left has a decorative tassel typical of Lithuanian bands. 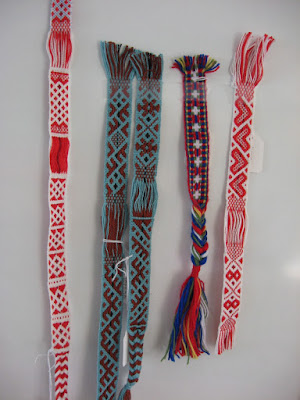 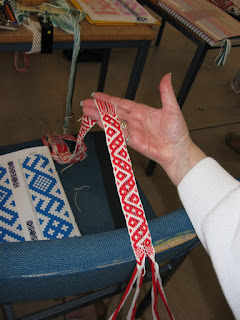 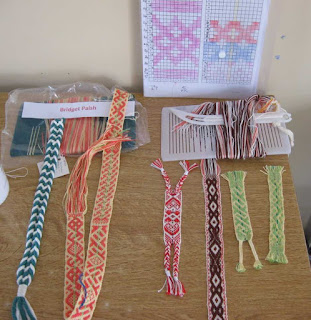 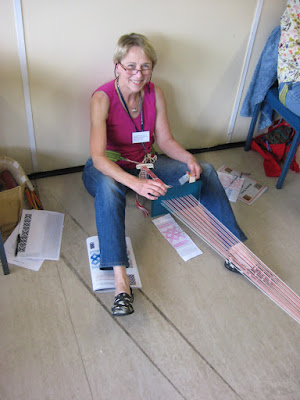 Thank you Barbara for sharing these lovely photographs.

In addition to being a class member, Barbara was also the class prefect.  Every morning she would read out the notices from the office about the arrangements for the day. It was an entertaining start to every day.

On Sunday morning, I wandered around the grounds. Moreton Morrell Hall was built in 1906 in the style of William and Anne.  Unfortunately, there was a fire some years ago and some of the main hall cannot be used.  A previous Summer School had been held in the Hall itself.  Now, there is a general air of neglect around the once beautiful gardens..

I had a wonderful week.  The students were all enthusiastic and interested, although I had over-prepared and taken far too many activities for them to try. I am already looking forward to the next summer school - perhaps as a student after seeing the activities on offer in other classrooms.

Posted by Durham weaver at 06:27 No comments: