I love stripes and I enjoy designing new stripes.  After finishing my last blog I thought about the lovely book about Estonian skirt stripes  Virumaa Seelikud. Taking inspiration from the book I decided to design two stripes to share with you. For details of the book look at the previous blog entry in March or the  book list on the blog.

Here is a sample page so that you can see the high quality of this book.

Making a yarn wrap is a good way of looking at colour and proportion before you start weaving. Here is yarn wrap taken from the skirt material which dates from 1909. The yarn wrap is a guide.

If you look at the yarn wrap you can see 2 white yarns 4 pale pink 4 dark pink then 4 black.  In the centre there are 4 pale blue.

If you wanted to weave a narrow band so that this is what appears on the surface you need to double the warp ends for each colour. There are 90 warp ends.  I wove the band using 16/2 cotton and it is 2.4 cm in width.

On page 89 there is a lovely stripe design for woven material for a skirt.  I looked at one element of the stripe pattern and made a yarn wrap using 16/2 cotton. For a narrower band you can alter the width of each strip.  Here I have halved the number for each stripe.  Using different yarn will also affect the width of the band.
For this band I used 55 warp ends.  I used the number of yarns that can be seen on the surface of the yarn wrap.


Do look at the page on Plain Weave Warp Faced Bands on my blog for another example.

Here are two more books which I bought several years ago which are a good source of inspiration for stripes. 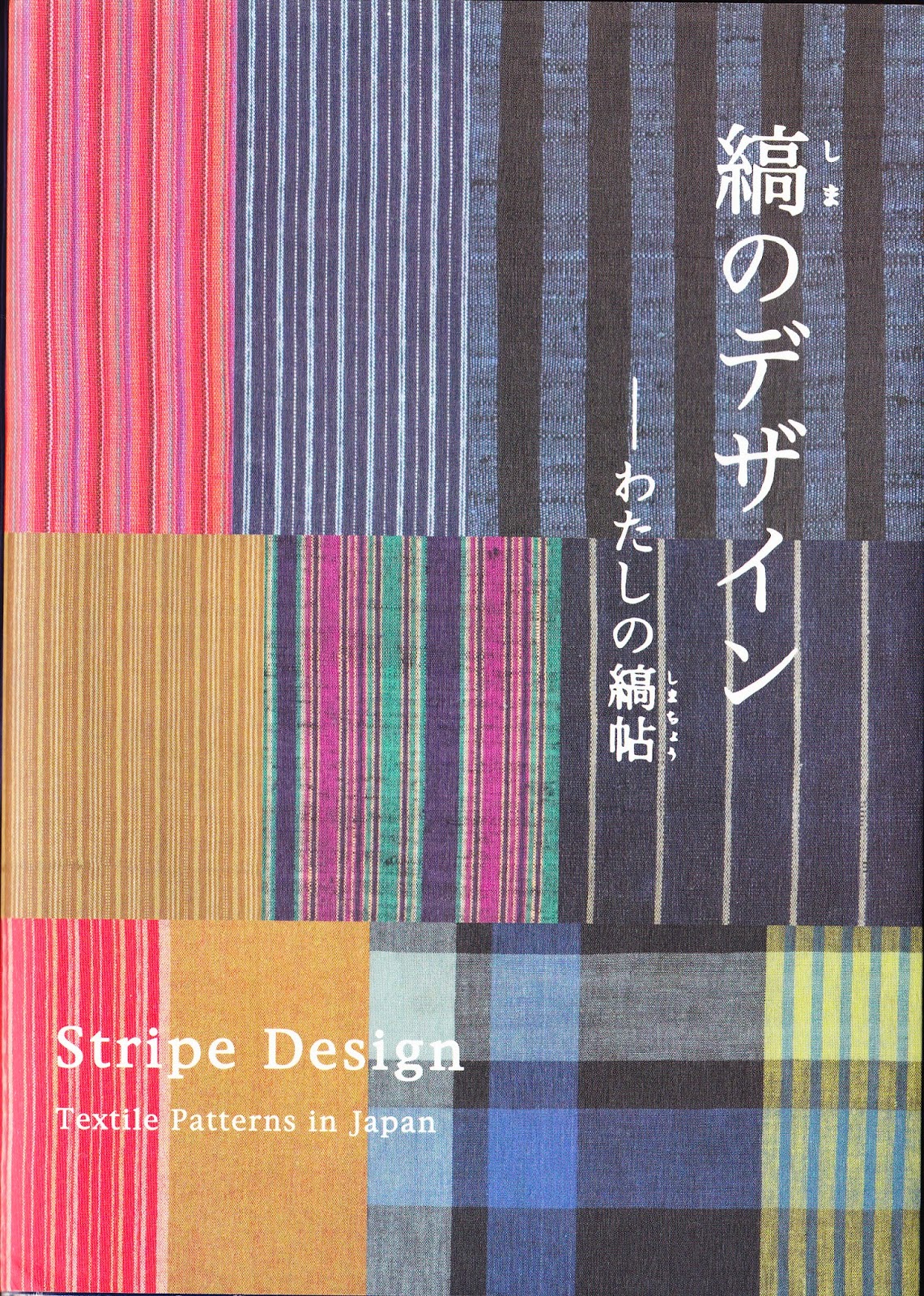 I have just finished weaving a set of small tea towels for our motor home.
Warp: cottolin in four shades: pale grey dark grey burgundy and pale burgundy.
Weft: One towel -  burgundy; one towel - pale burgundy and the final towel is woven as drawn in.
Sett: 20 ends per inch

Weave structure: plain weave.  I used 8 shafts but plain weave can be woven using any even number of shafts.

Stripes can be turned into checks very easily but take longer to weave as more shuttles have to be used.


My friend Richard plays the Northumbrian pipes and also makes them. Recently he was given a set of old pipes which are Border or Lowland pipes.  They are over 100 years old.  Richard is going to make a copy of them and donate the originals to a museum.  However, he is trying to find out as much as he can about them. The pipes were carefully packaged with the fragments of a tartan cover.

As a weaver I was particularly interested in the fragment of tartan which came with the pipes.

First of all I need to describe the Northumbrian Pipes. Here is a picture of a set of pipes that Richard is restoring at the moment. He supplied the descriptions of the different types of pipes.

This shows a set of "standard" Northumbrian small-pipes which is currently undergoing restoration by Richard.  These are typical of what most people would understand by Northunbrian pipes.  This layout has the chanter coming out of one stock (the socket that is tied into the airbag), and three drones all coming out of another different stock.  They are bellows-blown so they have a third stock that takes the blowpipe.  They are played with the drones across the chest rather than over the shoulder.  The leather air bag is usually covered in fabric - in this case blue velvet - and it is this bag cover that gives us the fragments of tartan in the sample.

They have the same general layout as "large Northumbrian Pipes" which have an uncertain pedigree and several names but are most commonly known as "Border pipes".

The Border or Lowland Pipes


The Border (or Lowland Pipes) being researched

This is the tartan from the set of Border pipes probably dating from 1800 - 1850.  Originally, it

would have covered the leather airbag. As you can see by the picture the tartan is in a poor state.  Some of the holes are for the stock and drones but the material itself is extremely fragile. The scale is indicated by the ruler.

Unfortunately the photograph that I took did not reproduce the subtlety of the colours.  The colours are: natural( beige/white), light olive and dark olive and a soft red.  (four colours in all). I counted the threads to find the pattern repeat.  The ruler gives an idea of the size of the tartan pattern.


Pattern repeat is 356 warp ends.   Selvedge is 8 threads natural which is in a tighter weave
In the book The Tartan Weaver’s Guide by James D. Scarlett  it is noted that 'As late as the 1840 a setting of 52 per inch was normal.' The sett for the tartan fragment appears to be 48 per inch square.

We are trying to identify the tartan.  If you can identify the pattern, do let us know.  It would be lovely to present the pipes to a museum with as much information as possible.

Just a note about tartans in general.  Clan tartans are an invention of the early 18th century.  Walter Scott wanted the Highlanders to pay homage to George IV on his first visit to Scotland in 1822.  One firm of weavers, William Wilson and Son of Bannockburn immediately saw the economic possibilities of selling more of their tartan patterns. They put together a Key Pattern Book so that Highland Chiefs could buy what they required.  Thus tartans became associated with Highland Clans.

Richard has developed a web page of his findings about piping in North Shields.

Here is the link: http://northshieldsnsp.co.uk/

He will be following up the information about the likely origin of the tartan kindly supplied by Peter. He identified the tartan as probably one of Wilsons' numbered patterns c1820-40; specifically, a variation of the No 43, Kidd or Caledonia, of which there there were several.

He pointed out that my draft is faulty in the methodology used for recording tartans and the shades and he supplied the correct version.
Here it is: The correct method for the setting (per Wilsons') method is R/12 LB8 G50 K8 W8 LB16 R/34 - half pivot counts.
R = red
LB = light blue
G = green
W = white
K = black