I saw a fashion article earlier this year with an illustration of a lovely sash belt.

Here is another sash I saw in a shop window. 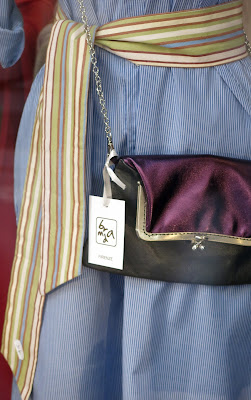 I remembered that I had bought a Peruvian sash belt many years ago.


Of course, sash belts are part of the folk costume in many countries. They are made using many different techniques; finger weaving, tablet weaving, sprang as well as patterned band weaving.

Here is another traditional Ukrainian Belt, called krajka, handmade using the old traditional weaving loom in Western Ukraine. There are some lovely designs shown in the Etsy shop WovenSlavicBelts.


Sash belts are easy to weave and wear.  I thought that I would try to weave my own sash as I love stripes and warp faced plain weave is such an easy structure. I was not sure of the sett for 16/2 Swedish cotton.  I decided to use a high sett and weave a short sample.

I used three colours of red, white and blue, with a darker blue for the border.  I used a 14 dent reed with 6 ends per dent.  Weft is white 16/2 cotton.

It was easier to weave than I thought it would be. The Swedish cotton is good quality and strong.

I tried using a dark navy weft so that the edges of the band would be a solid colour. This made the white stripe darker so I switched to using a white weft.  This was better and did not show up in the red and blue striped areas.  It makes a white dotted edge to the belt which echos the dotted edges of red and blue.

Here is the finished belt. It is 9.5 cm in width which I feel is slightly too wide. The feel of the woven material is smooth and flexible.  The cotton has a slight sheen.  The colour is more natural than on the close up on the loom. Artificial lighting alters colour values.

I am not sure I will wear this as a belt.  The material is lovely to handle and I thought that I could make a small bag with it.

It was a good learning exercise.  I now know the sett for weaving warp faced wider bands and the type of material that 16/2 cotton produces.

Email ThisBlogThis!Share to TwitterShare to FacebookShare to Pinterest
Labels: belt

The first book that I bought when I started to learn to weave was A Handweavers Pattern Book by Marguerite P Davison.  It was first published in 1944.  It is a treasure - lovely to browse and full of traditional patterns with wonderful names such as Gothic Cross, Queen's Delight, Batchelor's Fancy, Wall of Troy, and Saterglantan.  The last name felt very exotic and it was many years before I discovered that Saterglantan is a weaving college in Sweden.

I decided to weave one of the patterns - Cat track and Snail trail which I saw in an Interweave Press booklet.  In Marguerite Davison's book it is known as Wandering Vine. 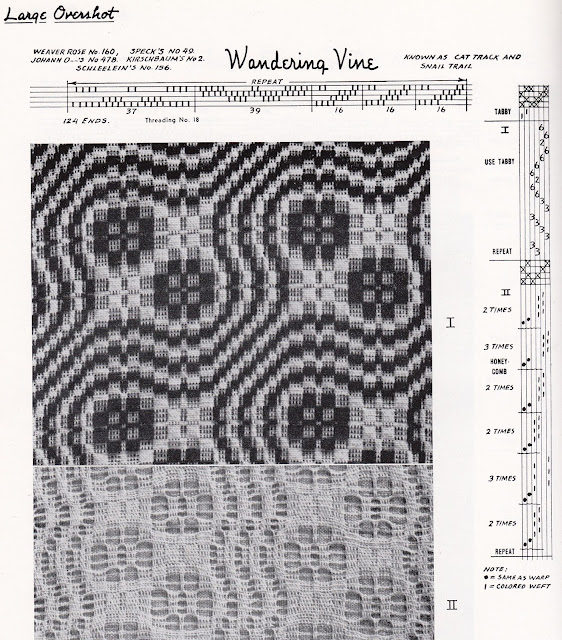 This is a design that can be played with and new combinations discovered.

Here is another version. The cat track is more distinct and the snail trail is narrower. Remember that there needs to be a plain weave tabby in between the pattern weft.


A variation of the pattern

I decided to adapt the pattern to make four shorter cat tracks surrounded by the 'snail trail'. Perhaps it should be christened kitten track and snail trail.

The warp is in stripes 40 ends in white and 40 ends in colour. I used five stripes of white alternating with six stripes of green.

Here is the weave chart with the tabby weft included. It does seem a little more complex but it is easy to weave.

The draft may seem a bit confusing but it is easy to get into the swing of using two shuttles. One shuttle has the plain weave weft of 16/2 cotton.  The other shuttle has a doubled 16/2 linen yarn.


The handtowel is very sturdy and absorbent. On the loom, the cloth will seem very stiff and rather hard.  Do not worry. Once it is washed it becomes soft.  This cloth is very absorbent.

I decided weave another version using blue and white stripes.

Of course, the design can be varied by using a blue or white tabby yarn and a blue or white linen pattern yarn. Once threaded the pattern can be woven with either two small footprints or four smaller ones.

I  made a long warp for four towels. This warp had been lying around for some time so I used it for the online workshop with the Online Guild for Weavers, Spinners and Dyers for January 2017.  the first workshop of the year is always UFO  (Unfinished Objects)  This is a chance to look through your projects half finished or as in my case not even started and make a good effort to complete them.
I really like this workshop and each year I have managed to find the extra effort to complete long abandoned projects.  It is such a good way to start the year.  Even owning up to what you would like to do is an added incentive to really achieve your goal.  I am so pleased that I finished this before the end of January.  i really found it difficult to get up the enthusiasm needed but once started and with encouragement form other Guild members, I was away.

In between each towel I used a few picks of yellow cottolin. This is where I cut the long fabric after weaving. At the beginning and end of each towel, I wove 10 - 12 picks using 16/2 cotton in plain weave.  This is to make the hem less bulky.  The white cotton is folded underneath and will not show when the handtowel is hemmed. 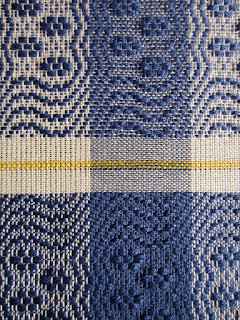 Here you can see the difference when using a blue linen pattern yarn with either a white tabby weft of a blue tabby weft.

For the pattern yarn of a doubled 16/2 linen I use my large shuttle which can take two spools of yarn.

Whenever I need to use a double yarn, I always use this shuttle.  I have tried winding two threads together but I find that there is always some slack in one yarn.

Once the fabric is off the loom, cut it into the towel lengths.  I iron the top and bottom of each towel to press the material for the hem.  I tack the hems and add the hanging tags and press again.  Then I sew the hems using a zig zag stitch.  The towels are washed in a normal machine wash.


I wove a hanging tag for the towels.  There are 35 warp ends in two colours.  i used 16/2 cotton doubled for the warp ends.  The weft is blue cottolin.

I like the effect of the dotted pattern and the horizontal stripe in the centre.

Measurements of the two towels before and after washing.

The towels look really lovely and are very absorbent.