Handtowel in linen and tow linen


Here is a lovely hand towel that I wove for my black and white bathroom. It is made from linen and tow linen.  Tow linen is a cheaper alternative for linen but is very 'hairy'. This makes it very absorbent for towels, but be warned, it sheds for the first few washes.

Beware: A lot of colour comes out in the wash so I suggest washing it by hand for the first few times. 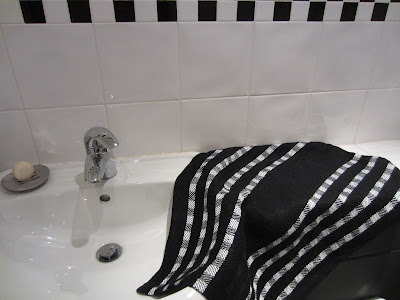 The towel is so pretty.


It is difficult to show in a photograph but the warp in the centre of the towel alternates between 24 ends of black tow linen no 6  and 12 doubled ends of 16/2 black linen.

The 16/2 linen has a shine but the tow linen gives a matt finish.  I like the way that alternating the black stripes in the centre shine against the matt black.

The white stripes are 12 doubled threads of white linen. The weft is 6 tow linen in black. Tow linen is very 'hairy' and is not as strong as ordinary linen. The borders on each side start with the warp of 8 doubled ends of black linen.  This makes the selvedge strong.

There are four stripes of white on each side. In the centre the sequence is carried on with black linen stripes

For the hems at each end I wove 12 picks using black 16/2 line singly.  This makes the hem less bulky when turned down.

I have coloured the drawdown to make the pattern easier to see. The turquoise stripe at each side is the selvedge. The 8 warp ends are doubled 16/2 linen in black because tow linen would not be strong enough for the edge of the towel.

I made a hanging tag for the towel. I designed two variations.


I felt that the predominantly white tag provided a better contrast. here it is on the towel.

Reversing the colours gives an interesting variation but I preferred the predominately white band for the hand towels. 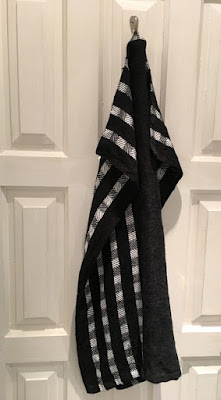 I enjoyed weaving this towel and it co-ordinates with the bathroom tiles.

Next month I will be posting the instructions for the black and white bath mat that I wove to co-ordinate with the handtowels and the bathroom.