The FutureLearn course on the Power of Colour was very interesting. During the course I decided to take Autumn colours as a theme and design a scarf. I took this picture a couple of years ago.  At the moment the top of the cathedral is shrouded in scaffolding and is not so picturesque but the trees on the riverbank have been as glorious as ever.

On a recent walk I took this picture of autumn leaves on the path.

What a variety of colours in the leaves. Green, golden yellow, crimson red, brown, orange. I love autumn colours.

The horse chestnut tree and its conkers are particularly colourful. 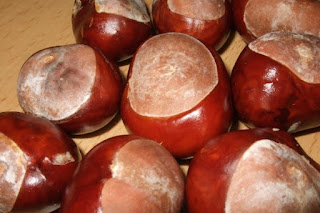 I looked at the yarn I have in my stash and chose colours to represent autumn and the lovely shiny surface of the conker.  I thought that a simple grey weft would be suitable.


I wanted to try an unusual pattern and I thought of the shape of the conker.  I found a pattern of circles and adapted it. It was time consuming to thread the heddles accurately as you can see from the weave draft.

The pattern uses 16 shafts and I used two shafts for a basket weave selvedge of 4 ends on each side. so 18 shafts in all.  The weave draft gives two full pattern repeats.  I have highlighted the centre and border of each repeat in colour so to make the pattern repeat clearer.


Each pattern takes 32 warp ends.  I used 12 pattern repeats and 4 ends on each side for the selvedge. A total of 384 warp ends in all.

The weft in the picture is  2/20 Tussah silk in grey. I tried weaving with this yarn but it was too thick for the sett.  I chose a yarn remnant that I had of a fine pale yellow cashmere. This worked much better and the pattern of circles became more prominent. The yellow fits better with the autumn colour theme.

The silk is a 2/60 silk and I used it in threes. This meant that I could gradually shade the colours  across the warp.

I used a 10 dent reed threaded at three warp ends per dent : 30epi.
I think that this sett was rather tight and I could have used a slightly lower sett.

Here is the weaving on the loom. The shaded colours of the warp show up in the sunlight.

Here is a close up of the circle pattern whilst on the loom. 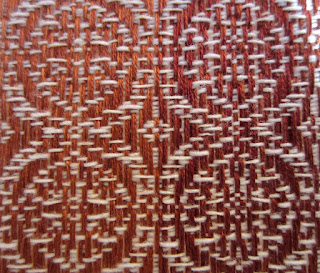 The weaving looks loose but the cashmere yarn will swell when washed.

Here is the finished scarf. I found that washing softened the scarf to give a lovely cuddly finish. I was very pleased that the circle shapes are circles.  I tried hard when weaving to keep an even tension and beat but I was not sure whether the circles would remain circular once the scarf was off the loom. Using a different yarn for the weft may have altered the way in which the material set after washing. However, I need not have worried.

A few years ago, I wove a large scarf/stole for myself in Autumn colours.  I experimented with network drafting to achieve a swirly pattern.

Here is the weave draft. It is on 16 shafts with two additional shafts for the plain weave selvedge. 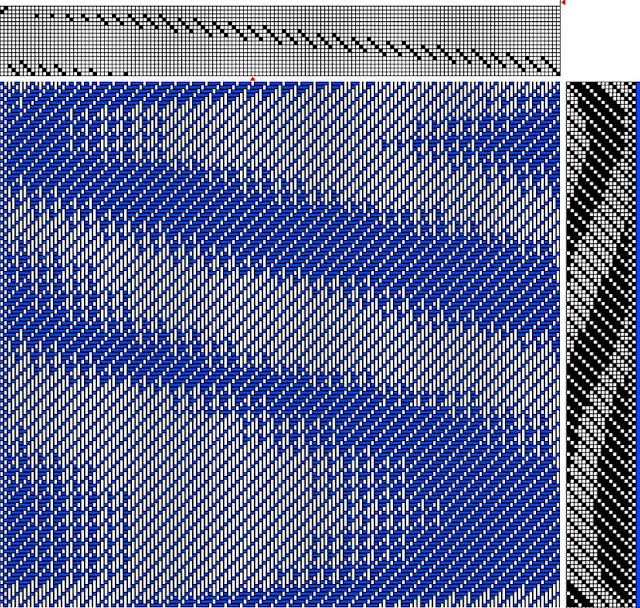 It is difficult to photograph.  The pattern seems alive when the scarf is draped and moving.

Silk never goes out of fashion.  I love the way it reacts with light to show up the pattern.

My next blog will be in January when I will be updating my Pinterest blog from July 2016.   One of the mysteries has been solved thanks to a reader who was as intrigued as I was about the medieval pictures. The second post for January will be the four shaft handtowel pattern.

Have a wonderful festive season.