In the latest edition of the Journal for Weavers, Spinners and Dyers, issue 276, Winter 2020, there is an article by my friend Tamaki and I about the traditional woven band of Japan.  It is possible to buy a copy from https://journalwsd.org.uk/
Researching Sanada-himo: The Traditional Japanese Woven Band. Pages 32 - 35.
These beautiful woven treasures are a delight. I have organised a couple of workshops about this type of band and made a YouTube video to accompany the workshop.
Weaving Sandahimo Cords.  https://youtu.be/vHSGt9GxUfQ
After returning from Japan last year, I received a wonderful gift. 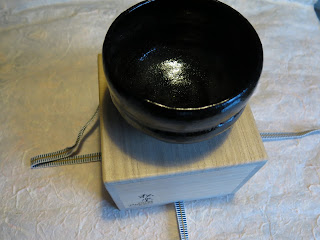 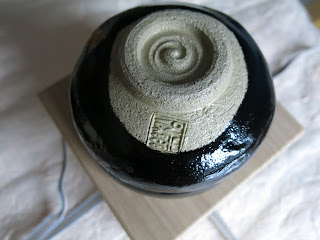 This beautiful bowl was an unexpected present. I had been looking for such a bowl to buy whilst I was there but did not see the type of bowl I wanted.  When I opened the parcel it was such a jolt of surprise and delight.
It is wrapped and fits inside its own box.  The box is tied with a sanda-himo band. I made a short video showing how to tie the knot,.
Tying a Sanada Himo Cord:  https://youtu.be/aO9s_ftgnbE
Here is how to tie the knot in pictures. 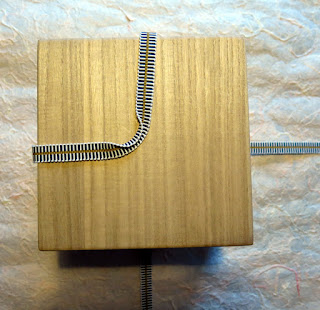 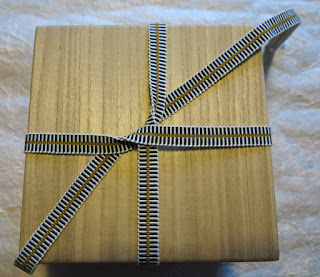 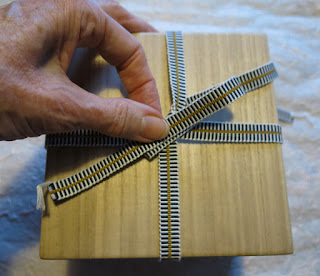 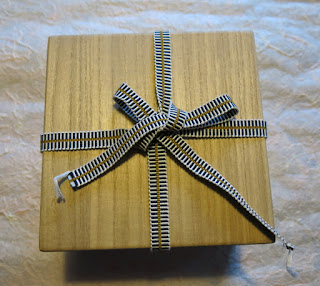 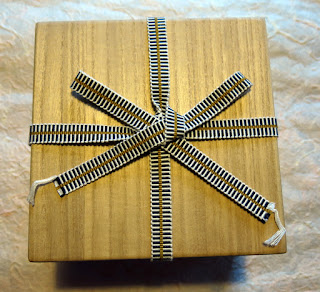 There are many other videos available about this technique of tying.  After I had made my YouTube video I found this one by Richard Milgrim.
Richard Milgrim : Tying Sanada himo for Richard Milgrim's boxes   https://youtu.be/d-IVKOPvwt8
Richard Milgrim is an American who makes beautiful Japanese ceramics. I mentioned his TED lecture in a Facebook post recently.
TED lecture: Peace in one's hands.  https://www.youtube.com/watch?v=A-V0gm6vFQE&t=8s
In Kyoto, I visited the bookshop for a Chado school and bought this book. 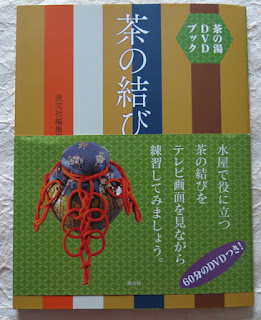 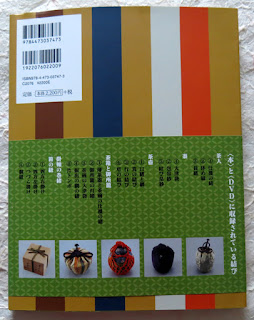 It came with a very useful DVD.  I followed the instructions on how to tie the knot around the box for my beautiful bowl.
I thought that I would use this way of tying for Christmas presents.
When I visited the Pitt Rivers Museum in Oxford some time ago these traditional Peruvian bands were on sale.  I bought two because I thought that the colour combinations were particularly attractive. I thought that I could use these bands to tie my gifts.

The blue band has a simple pattern.  The weft is double thickness. The picture shows the back and front of the band.

The white band is an unusual asymmetrical design. 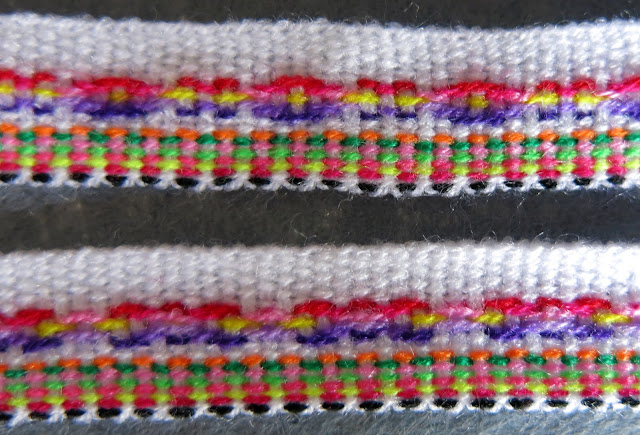 If you want to try to weave your own, here are the details. I have made a graph of the pattern for the blue band.  There are nine colours for the centre pattern on a border of blue. 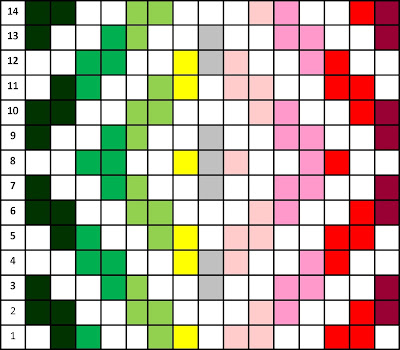 Remember: for this pattern chart, the heddle is always raised on the odd numbered picks and lowered on the even numbered picks.
Look at the chart carefully. Most of the coloured warp ends float over two picks.   There are 14 picks for the pattern repeat. There are no background threads behind the pattern threads. All the warp ends are the same thickness. I used four ply sock yarn.

Warp.
Here is the warp sequence.  There are 27 warp ends in total.

6 blue, 2 dark green, 2 medium green, 2 pale green, 1 yellow, 1 white, 2 pink, 2 medium pink, 2 red, 1 burgundy, 6 blue.
Weft:
The weft is a double thread: the same as the blue edges of the band. I tried weaving with a single strand of the blue but the pattern becomes more compressed.  Using a double thread for the weft makes the pattern elongated and nearer to the original.
Threading the heddle.
Thread the warp ends alternately through a hole and a slot in a standard heddle.
Weaving.
You can weave without pick up and produce a warp faced band with coloured stripes.
If you want to create the pattern then  the coloured threads need to float over two picks.  Only on picks 1, 3, 7, 9 and 13 do some of the coloured threads only appear once. On these picks there is no pick up for the single coloured squares as they will appear when the  heddle is raised.  the coloured threads The 6 blue threads on either side weave as warp faced plain weave.  The central pattern area is not pulled together as much as the blue selvedges.

I had to devise my own way of weaving which took a little time.  There may be a more efficient way of selecting the pattern threads but I will have to experiment with different methods to see which is best.

I have not yet made a graph for the white band.  There are fewer pattern threads so the weaving should be more straightforward.

Here is my attempt at weaving this pattern. The colours of the wool are not identical to the original Peruvian band.  I tried using a single weft yarn but the pattern did not elongate which is a feature of the Peruvian band.  A double weft is much better although the selvedges are not as neat as I would have liked.  I will need to practise with this technique.

I wish everyone a peaceful and enjoyable festive season.
Susan J Foulkes Dec 2020
Posted by Durham weaver at 06:30 2 comments: