This weave is lovely and very useful as a hand towel. I do not know what it is called. The two pattern blocks are in a 2/1 twill with an additional pick. The warp is one colour - unbleached cotton - so the colour is only in the weft.  This means that if a long warp is put on the loom, several towels of different colours can be woven.


There are three blocks to treadle.  The first is the border for the hem. The next two blocks alternate to form the pattern. This draft will not weave plain weave but the first treadling on weaves over two under one.  This is used for the hems of the towels.  Use a thin cotton such as 16/2 cotton in unbleached or white.

As you can see with the two colours of weft, one block shows more of the coloured weft than the other.  This gives the appearance of checks. From these two blocks different patterns can be created.

The pattern can be woven in stripes or checks.


The border is the first pattern on the drawdown and is only used for the border. Weave about 4 cm with unbleached 16/2 cotton used singly.

For the centre of the towel, weave 30 cm then repeat the border pattern.  Finish with 13 cms in red then 4 cm in 16/2 cotton for the hem.


The hem is easy to turn under.  I used a zig zag stitch on my sewing machine.  The finer weft makes the hem less bulky.  I like the contrast with the white for the hem at each end of the towel.

The towel pattern can be varied.  I wove the  fourth towel in a pattern of small squares. This towel has been washed once then pressed.  This towel is not dependent upon an exact length of warp so it is useful for the final towel of the four. If my warp is not long enough, the pattern repeat is short so I can weave to the very end of the warp leaving just enough for the hem.


I designed a hanging tag for these towel. Here is the weave draft for the blue hanging tag.


Here are the completed towels. 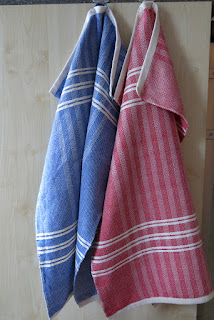 The towels are soft but are very efficient at drying hands.


I have woven variations of this design many times.  The towels are very hardwearing. I love the fact that when weaving, different colours can be used for the weft.  Next time I weave some more,  I think that I will vary the pattern.  I liked the small squares so I thought that I could design a different block pattern.

Email ThisBlogThis!Share to TwitterShare to FacebookShare to Pinterest
Labels: hand towels in cotton

Pinterest: Cataloguing the World: the bow loom and the inkle loom


Here are some images of bow looms in action. 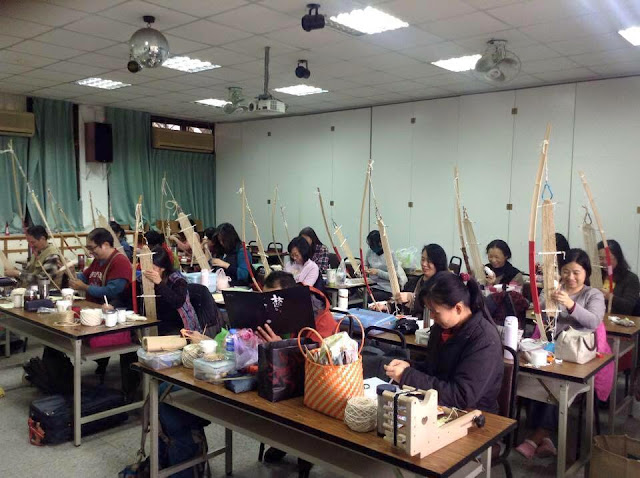 I love this picture of a class in Taiwan all using bow looms with heddles. They all seem to be enjoying the experience.

Here is another picture of a bow loom with  heddles 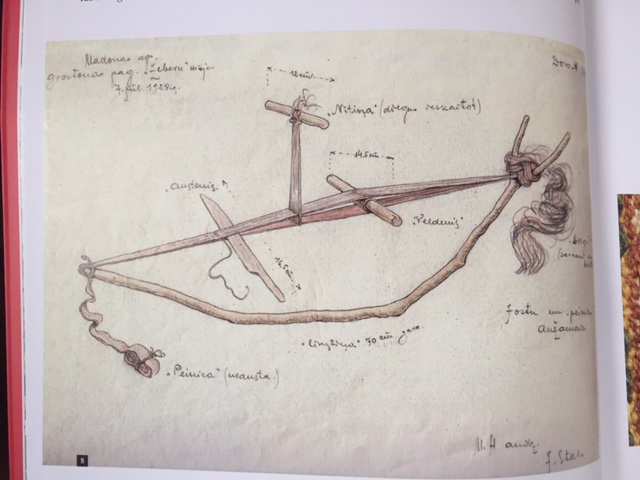 This useful diagram shows how the bow loom works. A long warp can be used, as the extra warp is wound around the forked end of the stick.  The other end has an attached tape which could be used to tie the end around the waist of the weaver.

It is not the only image however. Here is a copy of a photograph of the artist Karin Larsson with one of her daughters.  She is weaving on a large bow loom which appears to be tucked under her left arm.

The photograph is not clear as it is from an illustration in a book.


Bow looms do not have to be used with string heddles.  Here is a very simple bow loom for a tapestry woven friendship band. I bought a lovely little bow loom at Tacoma to use on a weaving open day for the Durham Guild.(see my blog for November 1st 2016 Durham Guild Open Day).

My little bow loom was very popular.  I have warped it with more beads for my next demonstration!.

The beads are threaded onto the warp thread before warping the bow loom.  Half the beads are on one side and half on the other.  The beads are brought down to the fell of the band when needed.

It is very quick and easy to weave and a very good introduction to weaving for beginners.

Here is a link to an introduction to bow loom weaving. Bow Loom weaving preview:


Of course, these simple looms do not have to be bow shaped.  The loom can be a variety of shapes. Both these pictures come from Lithuania


It is fascinating to see how resourceful weavers can be.

Look at this picture of an Estonian weaver.  She is weaving a patterned band using a circular warp. The warp is tensioned by fixing one part to a hook on the wall and the other part goes around her left leg.  This means that she can alter the tension on the warp very easily and both hands are free to manipulate the heddle rod and shuttle.

Here are two weavers in Cusco, Peru weaving in the Centre for Traditional Textiles. I took this picture in 2007. Here the loom is weaver tensioned.  The warp is attached to the fixed post and the other end of the warp is fastened around the waist of the weaver.  It is a backstrap loom.

Even with this simple equipment, patterns of astonishing complexity can be woven.  It was a joy to watch and a pleasure to support the weavers by buying textiles in the shop. I particularly liked the way that every textile for sale had a card with the weavers name on it. So often weavers are anonymous and yet their work should be celebrated.

Here is a close up of the weaving.


Now for an update on my post about Pinterest. Click here to read my previous post about Pinterest: cataloging the World.  (July 1st 2016)
Here is the picture that I was trying to identify.  Is it an early illustration or a modern artists impression? 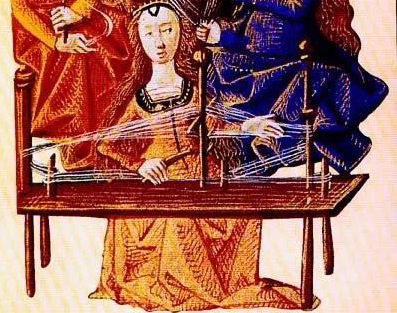 I asked members of the Braid Society and one member, Janis contacted Nancy Spies. Nancy kindly supplied the relevant links to the original illustration.

Here it is.  It is from Le Livre de bonnes moeurs de Jacques Legrand which dates to the 15th century. The probable date is 1490.  I have added the link address if you want to look at the other illustrations from this book.

"Le Livre de Bonnes Moeurs" 15th century, French, Chantilly (Musee Conde) OR Paris (BNF).  The web site is not clear, but apparently 77 pages of the MS are at Chantilly and 4 are in Paris. 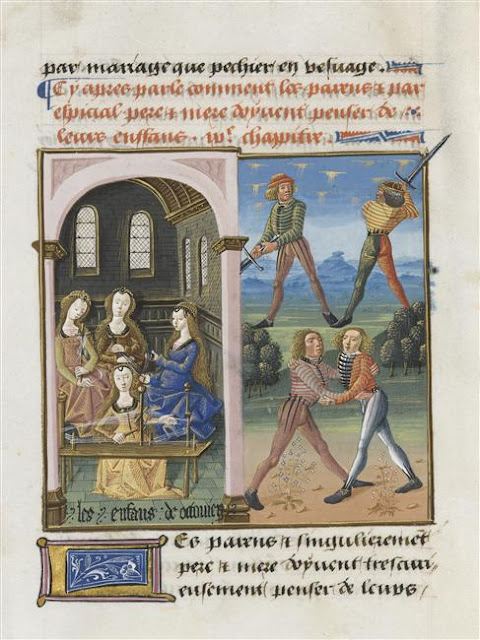 It would be wonderful if someone could make a replica.  However, I think that a better quality picture would be required to see the detail. The original artist has depicted the threads and the wooden uprights so I would imagine that in the original picture the relationship between them would be more easily seen.

As I wrote in my previous blog on this subject, it is fascinating to see how ancient looms were depicted.  These images deserve to be examined more closely and compared to modern counterparts. Some surprising similarities and differences may emerge.  I do not yet have an answer to the mysterious depiction of the bow loom used for tablet weaving  illustrated in my previous blog about Pinterest. Here is the illustration again.

If you want to see more images, do check out my Pinterest site.  One image can lead to another one on someone else's pin board. I am sure that you will love the search. Enjoy your own wander through 'a garden of bright images'.