Witney and the Witney Blanket - the Canadian connection

In September I visited Oxfordshire and we had a day out in Witney.  I had forgotten that there is a weaving connection. I was delighted to find a couple of museums and plenty of people who were willing to spend time discussing the weaving heritage of the area.

It is full of information and links to other sites.


The first place we visited was the Witney and District Musem. This delightful locally run museum was crammed with memorabilia from the town. The local blanket industry was a revelation to me as I was unaware of how extensive it had been. I can remember Witney blankets from my youth. Before the days of duvets, sheets and blankets made for the time consuming task of bed making.  Blankets were so heavy! 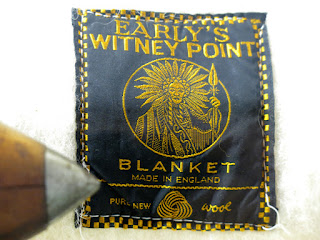 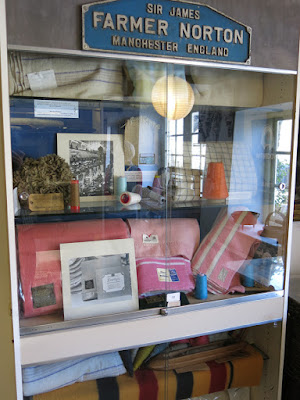 Here is one of the museum displays. 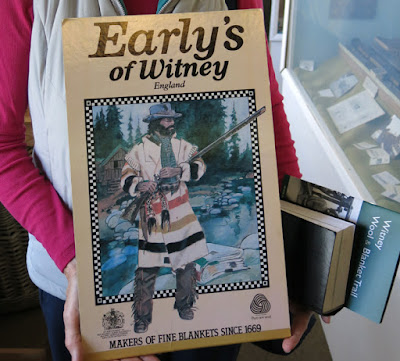 The curator kindly took out the advertising plaque from the display case so that I could see it more clearly.  It shows a North American trapper wearing a capote coat made from a Witney blanket.

The item that particularly intrigued me was the patterned belt.

My interest in patterned belts was aroused.  I had not seen this type of belt before.  If anyone has more information about it I would love to find out more.


This close up shows a Witney blanket.  The lines are called 'points'. The number of lines on the blanket was used as an exchange rate for those people trading skins.  For example, a blanket with four points would have been worth the same as four beaver skins.
Later on the number of points was used to show the size or weight of the blanket.
The word 'point' may have been derived from the French word empointer which means to stitch or to embroider. The points are darned into the blanket near to one end.

The usual bands of colours were black, yellow, red and green and were known as the headings. The surface of the blanket was raised so that it became thicker and more about to trap air.

It was difficult to get away from this delightful museum. Run by volunteers, it is a tribute to the interest felt by local people in their heritage.

The High Street has many fascinating buildings if you are interested in architecture. The Blanket Hall is a must-see. It also has a great tea room. For more pictures and information go to
Facebook page:   @theblankethall


At the start of the 18th century, the Company of Witney Blanket Weavers set it up as their meeting place. All of the weavers sent blankets to the Hudson Bay Company. For over 100 years point blankets were sent to North America. 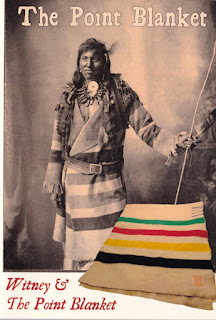 This little booklet told the story of the Witney Point Blanket 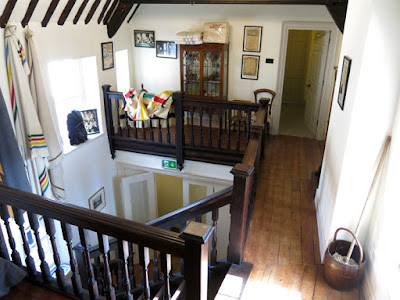 This is a view of the upstairs landing.  Note the blanket coat.  The temptation was too great. 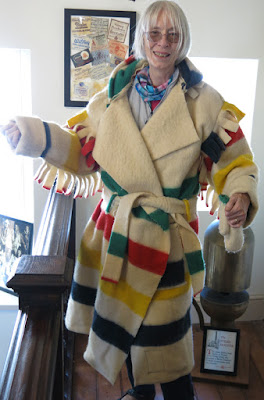 I could not resist trying it on.  I was very surprised at the weight of the material.  It would have been very warm in inhospitable environments.


The Great Room where the company of weavers used to meet was lovely and had a number of items laid out on the table. 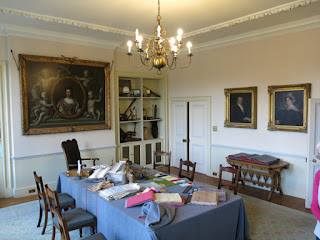 The sample book was intriguing but no touching.  My fingers itched to turn the pages!

Outside of Witney there is a small village, Filkins, which houses the Cotswolds Woollen Weavers. This is a commercial outlet but well worth the visit. It has a shop, coffee shop (very important!) a museum and a design studio.

This astonishing jumble of equipment is a relic of the thriving weaving industry.  It was an education rummaging through the items piled up on tables, the floor and in boxes. 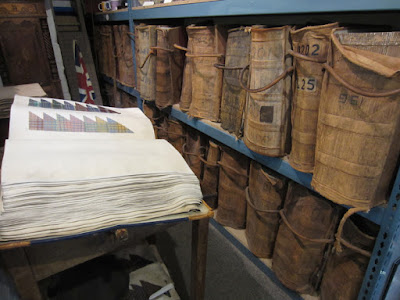 Upstairs the weaving record books are on display. Shelves and shelves of them! I wished I could have opened some of them and examined the samples from the old weaving industry.  One of the books was open. 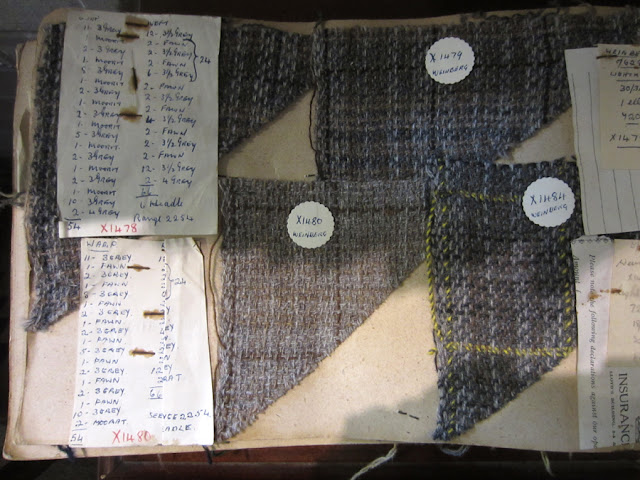 Here is one page of the open book.

I can recommend Witney as a place to visit if you are interested in the history of weaving.

In the Guardian Newspaper recently (20th September 2018) there was a display of photographs by Edward S Curtis which were due to be auctioned in New York in October. One picture was a Piegan lodge interior taken in 191. It is picture number 9 out of the 20 on the Guardian page.  The three  Native Americans are seated on the ground and there appears to be a pile of blankets on the floor as well. I could make out one stripe so they could be Witney blankets.


With the 9 pattern slot heddle you can also weave patterns with 5 and 7 pattern threads.

Here is the threading chart for 7 pattern threads when using a 9 pattern slot heddle.

Note that there are two empty slots and holes on each side marked with X.

Here is the pattern chart for a 7 pattern design of noughts and crosses.

Remember that only the coloured pattern threads appear on the chart. These are the threads that will be picked up to appear on the surface of the band.

I made many bookmarks to send to booksellers to accompany my book.


Here is the pattern for the bookmark with 7 pattern threads. This pattern is not in my book.

There are 48 picks in the pattern repeat.


Why not try this pattern for yourself? Varying the colours of the pattern threads and the border can dramatically alter the look of the band.

here is the threading chart for a 13 pattern slot heddle for a band with only 7 pattern threads. All the grey slots and holes are empty. There are only 2 border threads on each side of the pattern threads.

The double slotted heddle is available in a smaller size of  7 shorter slots for patterns threads.  This heddle can be used with a back strap, in a box loom or on a larger inkle loom.

Here is a portion of the graphic design which I saw on a  Weave Fair poster.

This pattern can be looked at in two ways; one with a pink pattern and one with a black pattern.

The pink pattern is on a black background.

On the right is the pattern draft  for 7 black pattern threads.  The pattern threads are twice as thick as the background and weft thread. The weft is pink and shows at the black selvedge as a pink dot.

The black pattern is on a pink background.

Can you see how the two patterns are related?

It is easier to see when you examine the woven bands.

As you can see, the two patterns are the same.  It depends upon which design is woven on the top.

Here is the threading diagram for the 7 pattern slot Sunna double slotted heddle.

The 7 pattern threads are numbered and are indicated in red.  They should be at least twice as thick as the background and border threads.  You can use as many border threads as there are slots and holes in the heddle.

If you wish to use a standard heddle or an inkle loom, here is the threading. 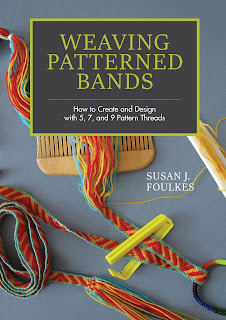 My book has 45 pattern charts for 7 thread patterns. Plenty to choose from and you now have an additional pattern.


'More than 140 patterns are included, along with principles for planning your own unique designs for contemporary uses such as straps, belts, bracelets, and even handfasting bands. The breathtaking range of colorful bands woven in Sweden, Finland, Russia, Estonia, Latvia, Lithuania, and Norway are explored and offer additional inspiration.'

You can order this book on Amazon and from the Book Depository UK.

In the USA, it is available from The Woolery who are based in Frankfort, Kentucky: https://woolery.com/weaving-patterned-bands.html

I was invited to write a blog post for the Woolery in the USA.  Here is the link