Swedish design is so crisp.  I love the clean visual effect of these traditional hand towels. They are easy to weave and of course you can vary the colour by changing the weft.  The weave structure is 10 shaft satin.


Here is the weave draft.

The warp is unbleached 16/2 cotton.  The weft is 16/1 linen in green.  The sett is 48 ends per inch. No floating selvedge is required for this pattern.

Here are the finished handtowels.  I wove them as presents for friends.

I like this type of weave structure where the warp is one colour and the weft another.  It means that one warp can produce towels in different colours.  I wove one with green linen, one with blue linen and one with yellow linen.


I wove a hanging tag for each of the towels.  Here is the pattern for the green towel.


In the bottom of a drawer I have just found an old Swedish towel which was bought many years ago so I thought that I would add the picture to this blog.  I had been looking for it for some time.  It is a similar pattern to these handtowels but woven in much finer thread.  It is a large square and is suitable for drying dishes or drying hands.


In January,  I will show a pattern suitable for a four shaft loom for a set of handtowels. Again the warp will be in one colour so the coloured weft can be varied.  I am putting the warp onto the loom today.

The Durham Guild of Spinning Weaving and Dyeing had their Open Weaving Day on Saturday 15th October 2016 at St Oswald's Institute on Church Road in Durham City.

Guild members were weaving using a variety of techniques and visitors encouraged to have a go at any skill they wish to try. Braiding, inkle loom weaving, table loom weaving, Kumihimo - there are so many techniques.

Everything was set up before we opened and there was a lovely display of work: finished work, work in progress and a variety of methods of weaving.


I took some ready warped rigid heddles so that visitors could try band weaving using a backstrap.

My Swedish band loom was warped so that visitors could weave a friendship bracelet. I used 16/2 cotton used double so that the band is 1.6 cm in width. The weft is black cottolin. I put on a very long warp so that anyone who  wove could cut off their piece to take home.  This proved very popular and all the warp was used.

I was pleased that we did have so many visitors who were interested and the warp was nearly finished by the end of the day.  One surprising visitor was the photographer from the local newspaper the Northern Echo. We had all just stopped for lunch but I was posed for a photograph with my loom. 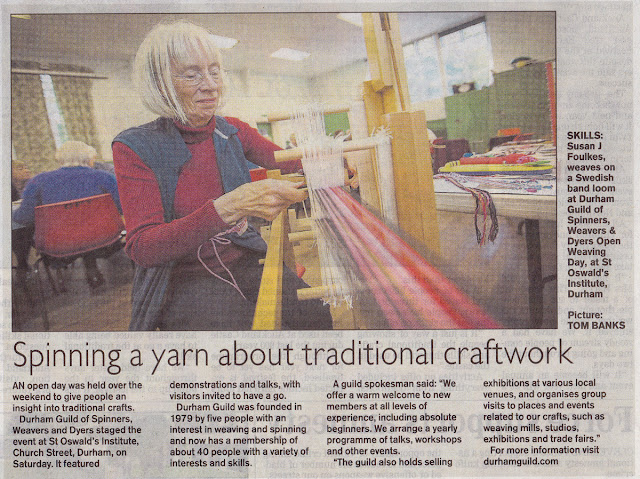 I bought a lovely little bow loom at Tacoma to use on this weaving open day for the Durham Guild. Someone immediately wanted to try and became very proficient in weaving with the little beads as embellishment.  I am going to warp it up and take it along to the next Guild meeting as it is such a draw, easy to make and so easy to use. 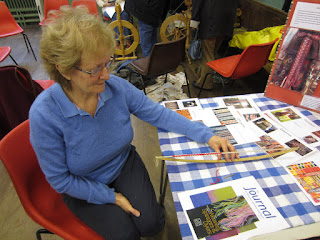 Many Guild members had brought work to do and looms for visitors to try.

Sue is weaving an interesting tapestry.

She is using a Roman inscription. 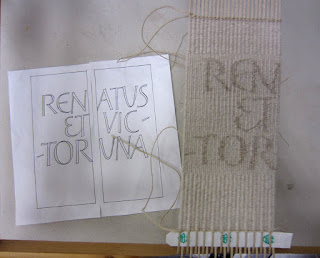 There is a  subtle use of natural colours.


Douglas brought his trusty table loom and is in the process of warping it with lovely colours to make another tartan.
The wonderful Ashford Knitters loom was also being used and showing how very versatile this simple loom can be. It is such a comfortable weaving position.

The Louet table loom was there with some experimental weaving by Norma.

There was a small display of bookmarks from the National Exhibition.  Every Guild could submit bookmarks and it is a great opportunity for a variety of crafts to display their skills in miniature. 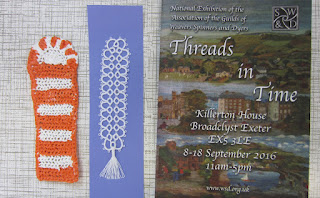 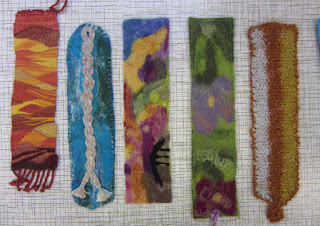 Inkle looms were ready warped for hands on experience of weaving.  Ann brought along two inkle looms and some portable kumihimo equipment. All fueled by mugs of tea!

There were lots of examples of finished pieces of weaving for visitors to handle.


And of course, for those members who do not weave, there was the spinners corner.


My display of Woven Bands from around the Baltic.


I brought along my display which shows the different woven bands from around the Baltic.  The stunning wooden heddle which I am using at the moment was made by Gunnar Karro from Estonia. I asked him to make a motif from the White Horse in Uffington. He sells his wares on Etsy and I can recommend the quality of his products. 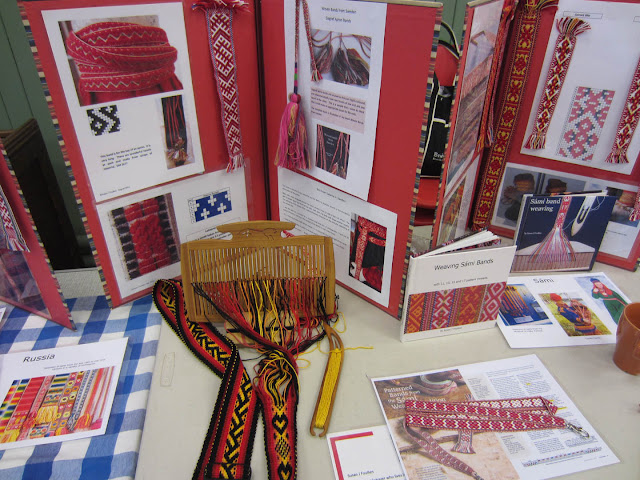 The curved shuttle has a matching motif to the heddle and there is an elegant stand for them both. I wove a patterned band in cotton and made it into a guitar strap which is shown next to the heddle. It has nine pattern threads.

It was a very busy day and we did have some people who have joined the Guild as a result.