Travels around the Baltic:St Petersburg


The Kunstkamera  (Museum of Anthropology and Ethnography) in St Petersburg, Russia

We visited St Peterburg in February this year.  Having seen the city in the summer when it was very hot, we thought that it would be interesting to see the winter season. Yes, it was cold and it was the first time that I had seen a wide frozen river.

The Kunstkamera (Museum of Anthropology and Ethnography) is one of the first museums in the world.  It was established by Peter the Great, an enlightened and intelligent monarch who started to collect curiosities. This was a fashionable educational pursuit at the time. The heart of the collection is still made up of exhibits collected during Peter's lifetime.  It houses over one million ethnographic, anthropological and archaeological artefacts. This beautiful building, on the right in the photograph, was built to house the collection and opened in 1734.

The web site is   http://www.kunstkamera.ru/en/

The museum houses a wonderful collection of clothing and artefacts from many cultures.  The web site is good but the mobile app is wonderful. Going around the museum, I could upload information from QR points on the display cabinets. However, you do not need to go to the museum in person. You can browse the collection yourself by downloading this app for your  mobile phone.  It is free in the app store. There are lots of pictures and information about the exhibits.


This app is very easy to use.

One you have clicked onto the museum guide you can explore each floor of the museum. 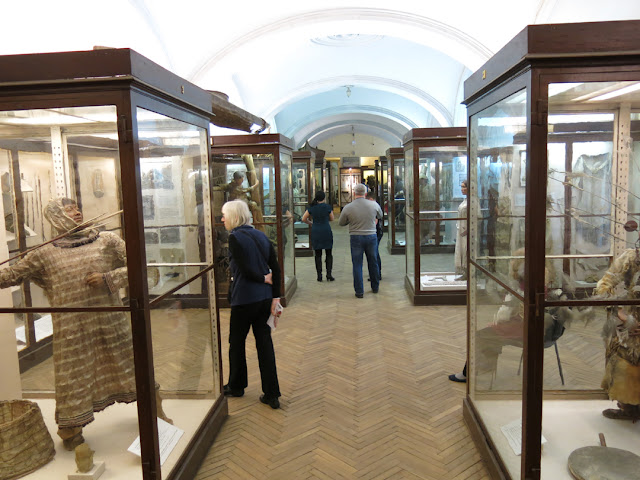 Here I am wandering around the museum.

Here are some of the amazing garments from 19th century Alaska.


The border on the coat is particularly attractive.


The cabinets displayed the garments and other artefacts clearly.  As you can see, many of the cases could be viewed from three sides which is very useful when examining textiles. 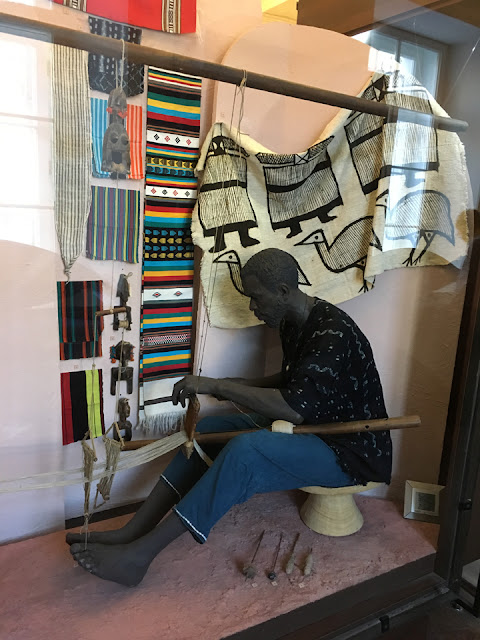 Here is a display of narrow band weaving from Africa. It is on Floor One, Hall 6 Africa,  case number 8 if you want to see it on the mobile app.  The textiles are gorgeous.

My interest was taken by a Manchurian costume. This can be seen on Floor Two, Hall 9 China, Mongolia and Korea in  case number 33 on the mobile app.

This was the only belt on display which is similar to belts from countries in northern Europe in particular to those in the Ukraine, Russia, Belarus, Latvia and Lithuania.

The central area has a pattern with 11 pattern threads on a background of half basket weave.  There is a small pattern on either side which is a supplementary warp pattern on a background of warp faced plain weave. The fringe on the ends is used extensively in the Baltic area.  Was this an export item?

I consulted David Rosier who is an expert on Chinese textiles. He took me through the history of the Manchu. (See my next blog in April on Dressing to Impress).

As the Manchu took power in 1644 they had very clear ideas on the design of Court Costume but this was in terms of structure rather than designs/iconography. The Manchu adopted the Confucian based system of government and all the infrastructure that had existed in previous dynasties. As such they did little to change the iconography on costumes initially and this was adapted gradually up until 1759 when Emperor Qianlong undertook the most comprehensive review, revision and expansion of the costume regulations ever undertaken. This has not provided us with any specific design patterns attributed to this group.

However the Manchu evolved into traders in 16th and 17th century, in particular in fur and ginseng. They certainly had trade links with Russia. It may be that this belt was a commissioned piece. Of course, it may be an ethnic minority piece of China.   More information is needed.
Thank you David, for your comments about this piece.

Here is the weave pattern showing two of the motifs on the Manchurian belt with the cross pattern. There are 11 pattern threads. Each pattern is repeated twice with the cross motif in-between.  The whole belt was not visible but there were eight patterns on the front each repeated twice and separated by the cross pattern. It would be lovely to be able to see the whole belt.
I have not had time to weave this pattern, but it is on my list of things to do.

Enjoy your virtual visit to the museum.
In a later blog I will show items from my visit to the Museum of Ethnography in St Petersburg.  This is one of the largest museums of its type in the world and the collections are simply stunning. You can have a preview here.  http://eng.ethnomuseum.ru/

This is the statue of Peter the Great in St Petersburg. it is known as The Bronze Horseman.

We visited the Hermitage Museum which now has a modern annex in the General Staff Building. The internal spaces of the building have been creatively altered to make a stunning new set of exhibition rooms.


In the Hermitage, there is a portrait of Peter the Great wearing his military uniform with his sash being worn around the waist. Amazingly the actual uniform which dates to before 1709 is on display with the military sash  near the original portrait.
Unfortunately I could not find out any further information about this uniform.

The sash interested me as I know that many military sashes are made using the sprang technique.  I looked carefully at the sash in display but could not see the details that might identify the technique.

During the International Conference of Braiding at Tacoma in July 2016, I went to a lecture by Carol James.  She told the story of how she made a replica of a sprang military sash which had belonged to George Washington.

Carol has made a special study of military sashes made using the sprang technique.

You can download her article Re-creating Military Sashes: Reviving the Sprang
Technique    from this web address:

Her YouTube video How to Make a Sash using the Sprang Technique is excellent.

Carol recreated the red silk sash which tradition states was given to George Washington by Major General Edward Braddock. She has written a very useful guide to identifying a sprang sash.  You can view the article here.

Unfortunately, I was unable to decide if the sash belonging to peter the Great was made by the sprang technique. However, Carol James has been in touch.

She sent me a photograph of a sash that she made which showed the S lean on the left and the Z lean on the right. This is diagnostic of the two-at-the-same-time work of sprang.

Take a closer look at the sash of Peter the Great.

Look at this close up of the two fringes on the sash.  Carol thinks that there is an  S lean to the stitches on one end of the sash and a Z lean on the other. This, in combination with the chain-link-fence type of structure is diagnostic of sprang.

She also thinks that there looks like several different qualities of thread have been used to compose the different stripes in the sash. The manner in which the holes stay open, it looks like a stiffer material, perhaps linen.

Many thanks Carol for your comments about this military sash.

I was very fortunate to be visiting in February as the special exhibition in this annex was about Mariano Fortuny - the great designer of the 20th century, celebrated by his contemporaries as “The Magician of Venice.” The Fortuny fabrics, especially the Delphos dresses were stunning.

The light levels had to be kept low but here are two images taken from Pinterest and the Met. 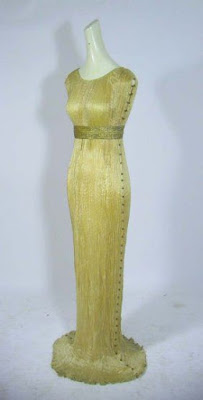 This dress and more can be seen on the Met web site at http://www.metmuseum.org/

The shimmering bronze outfit is at  http://www.metmuseum.org/art/collection/search/81594

Ever since I first saw one of these dresses in a museum many years ago, I have longed to wear one!

Many years ago, I bought a four shaft, four treadle band loom.  It was made by Michael Crompton a tapestry weaver. You can find out more about him here.  http://www.textileartist.org/michael-crompton-textile-weaver/

He was leaving his lovely cottage in Weardale and concentrating on tapestry weaving so he sold all his large looms.  He had made and adapted the design to suit his weaving.  At the time,  I was teaching weaving at a local authority Arts Centre and I bought a large floor loom for the class.  For myself, I bought this charming band loom.  Fortunately I am tall with long legs as the reach to the treadles is quite awkward for anyone with short legs.

The loom is beautifully made in solid oak and consequently quite heavy. There are no metal parts at all.  All the joints are dovetailed.

The beater is very sturdy.  It came with a one reed but I found some reed off cuts of different dents to use in the loom.

He designed the treadles so that if the loom is transported, the foot bars can be unscrewed so that the loom can be laid flat.


On the side is a trademark carved bird. 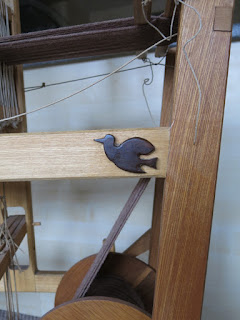 He and his wife used the loom to weave mug mats to match the line of table mats that they sold. With the band loom came a sack full of ready made warps.  I am now down to the last one as the warps are very long.

Here are some mug mats I wove on the previous white wool warp.


The wool is coarse carpet wool.  I hem stitch the mug mats then cut them apart.  The mats go into the wash so that they felt slightly. This holds the fringes together. Then the fringes can be cut neatly. They need to be pressed quite hard whilst still damp.

They are ideal as mug mats.  They are absorbent and protect the surface of a table from the heat of the mug.  They can also be washed.

Here is the weave drawdown. There are 48 ends of brown rug wool.


Here are examples that I wove on the brown warp. 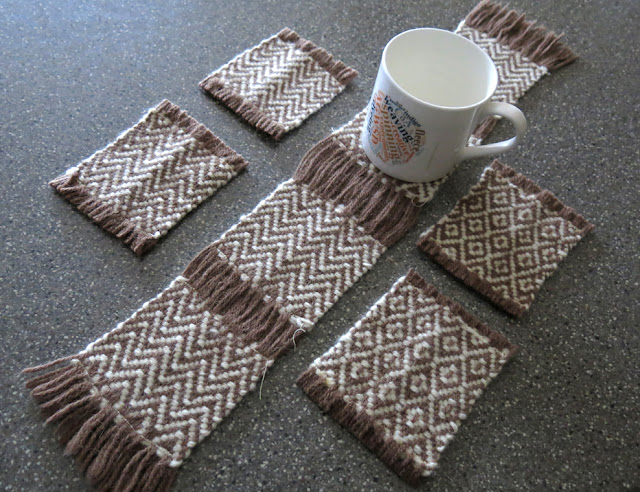 Here you can see the strip of four mug mats that have been stitched and washed but not yet trimmed.
The slight action of felting holds the ends together neatly.

I still have lots of  warp left so I am going to try different colours for the weft.

The mats are very practical and wash well.

This loom is going to be sold as I am running short of space.  I wanted to ensure that it was in full working order.