Travels around the Baltic: Finland


We spent two weeks in Finland on our travels around the Baltic.  We took the ferry to Helsinki from Tallin, Estonia.

The fish quay in Helsinki was wonderful.  There is an old fish market which sells a large variety of fish, fresh and smoked.  The cafe providing fish soup is well worth a visit.

What a lovely country! I knew very little about Finland other than that Finnish design is highly regarded. We love visiting new places and seeing the local styles of architecture.  One famous Finnish architect is Alva Aarto. We saw his house and office in Helsinki and visited the museum in Jyväskylä . We also went to Noormarkku to see the Villa Mairea, which houses an astonishing modern art collection. If you get the opportunity it is worth the effort to  make a visit.  It is the first time I have seen an art collection in a homely setting.  Art museums and stately homes make art seemed detached - objects to view.  Seeing Kandinsky, Degas, Gris, Braque, Picasso and Leger in such an intimate atmosphere gives another dimension to the experience of paintings and sculpture.


Staying for a while in Seinajoki, enabled us to see the town centre that Alva Aalto designed.

To return to the topic of weaving, when we were in Helsinki, we visited the National Museum which is built in the National Romantic style. There is a lovely collection of costumes and woven bands.  I was particularly interested in the carved wooden heddles. These were made as gifts for an intended bride and have an immense amount of careful work lavished on them.  Some of them were circular, a feature of heddles from the coastal area of Finland, which was strongly influenced by Sweden.

When I started weaving I subscribed to Vav Magasinet, the Swedish Weaving Magazine, and bought several interesting back issues. One contained an article about Kitty Collan-Tham. (Vav Magasinet, Nr 4, 1993 pages 20 - 22).  I did not weave bands at the time but this article inspired me to find out more about this lovely craft.  When I was researching places to visit on our Baltic trip, I was thrilled to find that the museum in Jyväskylä has a collection of her woven bands.  A curator at the British Museum had given me details about the Jyväskylä collection.

In the Craft Museum in Jyväskylä there is a beautiful display of textiles, including woven bands. There are also information sheets in Finnish which can be downloaded.  The pictures of woven bands are detailed and to my delight the information sheets mentioned that they had a Kitty Collan-Tham collection.

I contacted the museum and arranged to visit whilst we were in Finland.  I was made very welcome and thoroughly enjoyed my visit.  I saw about 200 woven bands in detail.  The work to analyse the patterns and weave examples is going to take a long time.  I was intrigued to see the influences from Sweden, Estonia, Russia and the Sami in the band patterns.

I was particularly impressed that the collection also included narrow bands where the pattern is simply formed by the order of the warp threads.  These are the easiest bands to weave yet can be very decorative.  Too often museums only collect the most impressive or colourful so the collection is skewed in favour of the most decorative examples.  These humble examples of design are also important as they show the full range of the type of bands that were woven.

Here is an example. 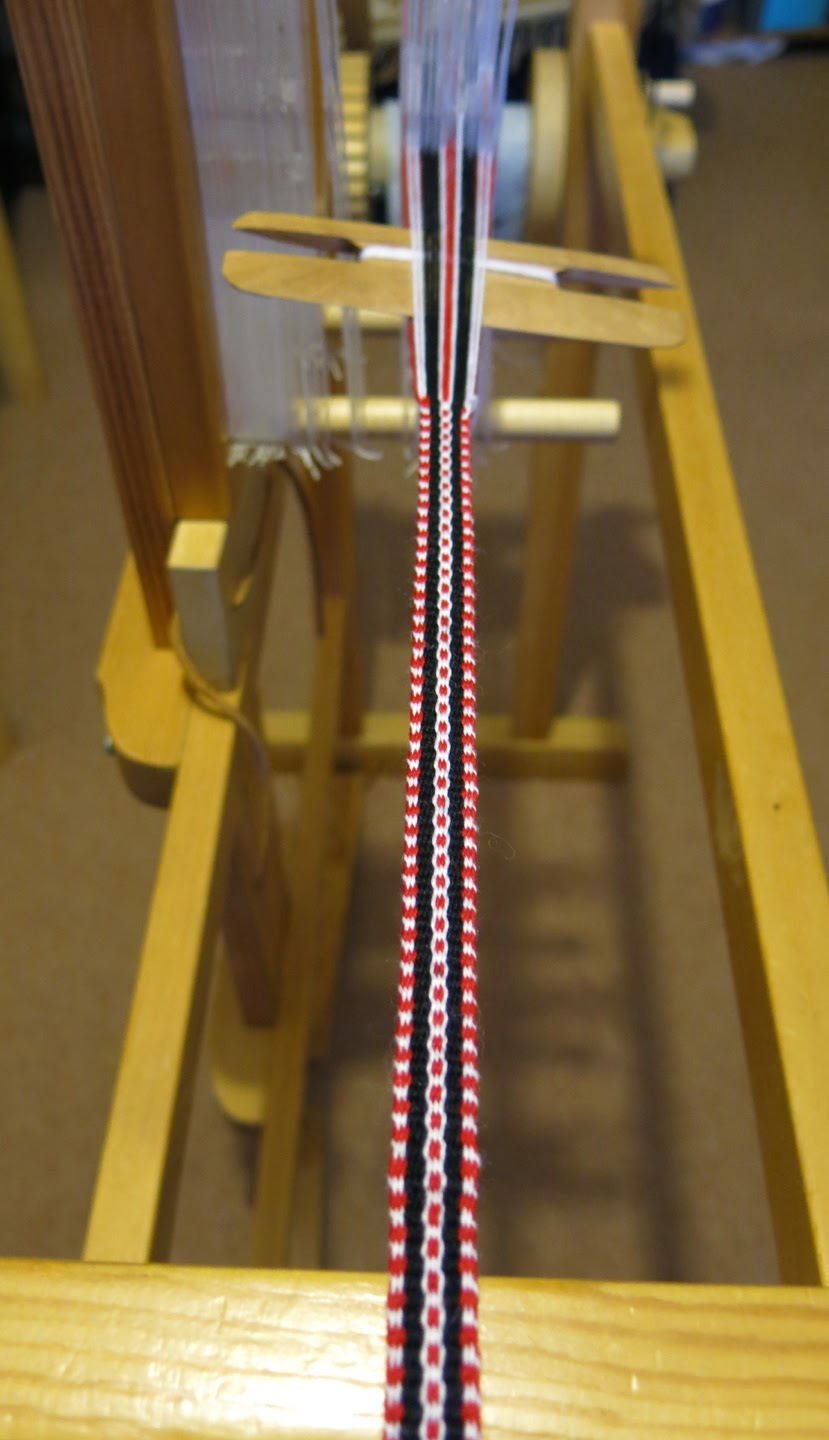 I wove this band on my Swedish band loom.  It is another Finnish pattern which I saw in the National Museum.  There are 27 woollen warp ends.

I have analysed and woven one of the bands with 25 pattern threads because it was so intriguing. I am still examining my photographs of the collection.

I was particularly thrilled that the final box of bands that I examined were the bands woven by Kitty. In fact they were the bands featured in the Vav Magasinet article. I carefully lined them up in the same formation as the picture in Vav.  Her weaving is lovely and the colours were quite varied.  I am looking forward to weaving some of them myself.
I am very grateful for the staff who gave up their time to answer my questions and make my visit to the conservation centre so rewarding.  I was even treated to cinnamon buns with my coffee!

We drove further north and stayed in Oulu.  This town on the coast was very attractive with its islands and bridges.  It was ideal for cycling.
We found the delightful Northern Ostrobothnia Museum, which has an informative exhibition of Sami artefacts. Look at my previous blog about Sami weaving for more details.

And now a coffee break! One of the delights of Sweden and Finland is the cinnamon bun.  We had to have at least one a day. The smell of freshly baked buns is truly marvellous and entices you into coffee shops. When we got home, my husband decided to bake his own to feed our addiction.

Here is the link to the cinnamon bun recipe that he found. It evokes for us the holiday in Sweden and Finland.  It is from the Guardian newspaper.

The wonderful cinnamon and cardamon aroma when they are baking perfumes the house. It is so hard just to eat one.


Last week I was in London and went to my favourite coffee shop - a tiny Swedish bakery which does the most wonderful cinnamon buns.

They are tucked away in Rose Street, next to Standford's bookshop near Covent Garden.

A Heart for Everyone.

It is nearly Valentines Day so I thought that I would post a few ideas for weaving hearts.

You can weave these patterns on a standard heddle or a double slotted Sunna heddle.The carved wooden heddle is from the  Vävkompaniet hand craft shop and is made by Åke Erlandsson, who is eighty years old.

The second way of weaving hearts is by a supplementary weft technique.  Here are two tea towels which have been woven with a border of joined hearts. 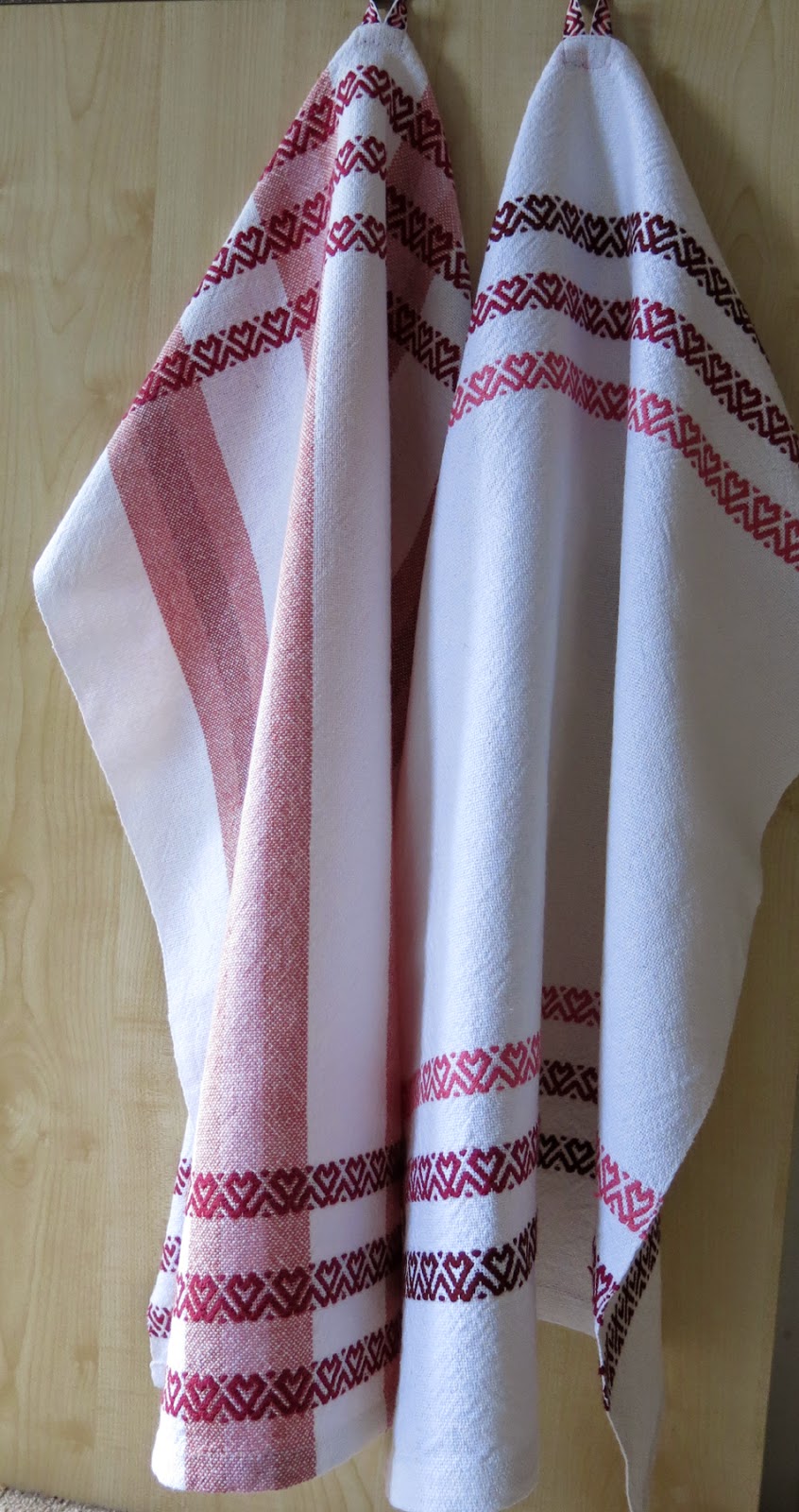 For the full weaving instructions including the matching narrow woven band, look at Handwoven magazine for Nov/Dec 2014, Vol 172, no 5, pages 66 - 68   The Heart of the Swedish Band Weaving Tradition.

The weave instructions show how to weave a heart border, but by varying the treadling you can weave more complicated patterns.  Here is a close up of one example.

Wrap yourself in hearts.

The third way of weaving heart patterns is by using a huck lace threading. I wove four heart scarves in different yarns: silk/linen mix, silk, baby camel and baby alpaca, which I sell in a local gallery.

I really like the effect of the heart patterns which go in different directions. This draft uses 16 shafts.

Here is the weaving drawdown for eight shafts.  This gives a column of hearts all facing in the same direction. The drawdown gives one pattern repeat plus a border of plain weave. 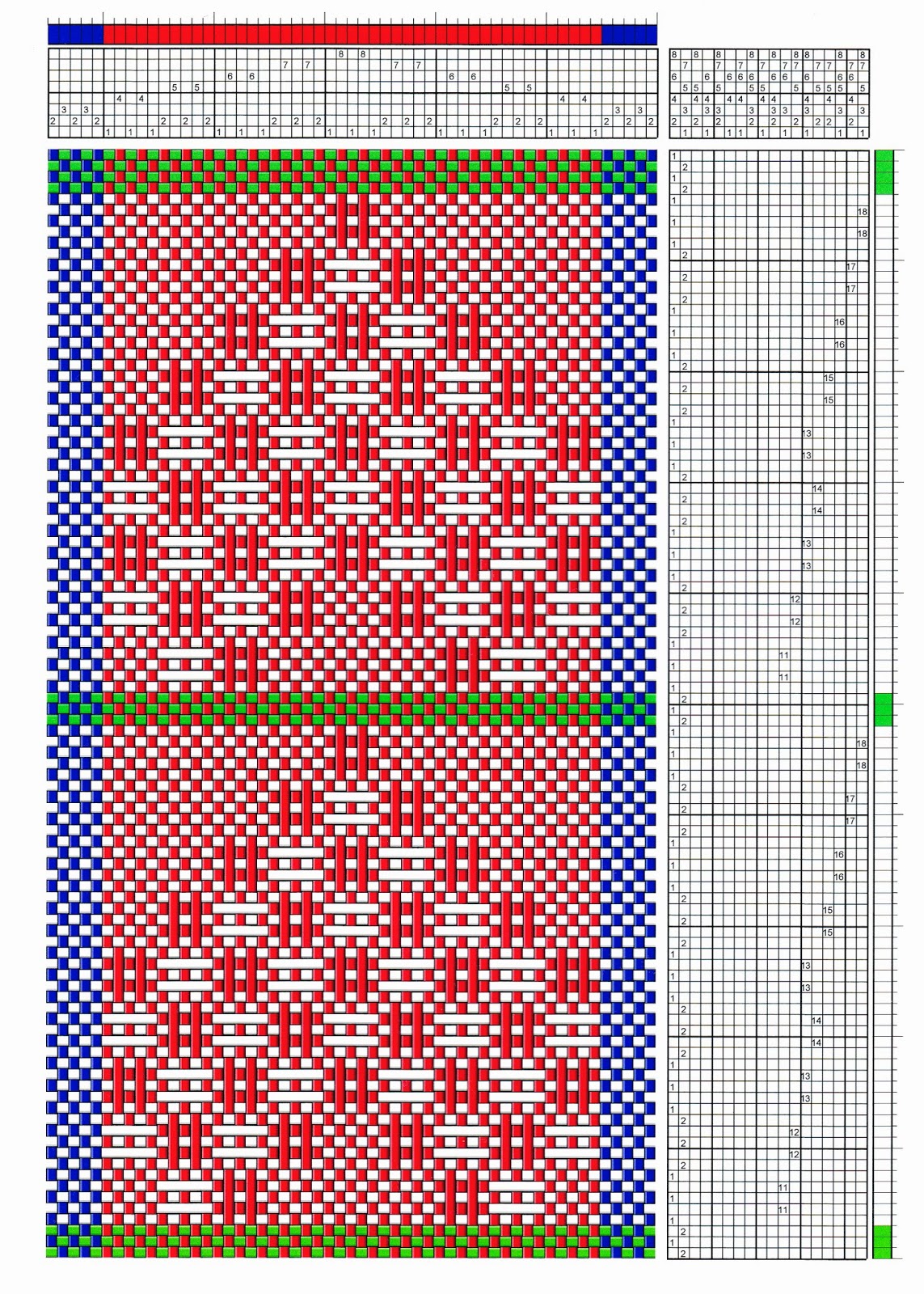 
These felt hearts were made using templates in my book Christmas Hearts.  Lots of templates for these shapes are also available on the internet to download.
I used the felt hearts to make pincushions.  They can also be appliqued to make a decoration.

I enjoyed the challenge of making this bag. The original blue bag was given to me at the Braid Society Conference in Manchester in 2012. I deliberately chose a plain bag so that I could embellish it later.

The idea for the design came from the lovely 19th century examples in Swedish museums.  Many designs use appliqued hearts.  Most bags are identified with initials and the date they were made. Why not sign your own work?

Do sign up to receive email updates of my blog posts.