Travels around the Baltic: Sámi weaving

The Sámi people are the indigenous people of northern Norway, Sweden, Finland and Russia. When I first became interested in band weaving, I decided to travel to Sweden to see the type of bands that were in museums.  I had only seen black and white diagrams of band patterns and a few colour photographs.

In 2009, travelling up to Sweden through Europe, we stopped in Schleswig and it was there that I saw my first collection of bands.  They were Sámi bands - and I knew nothing about the Sámi people  I was thrilled to see such lovely examples of band weaving and I wanted to find out more about the Sámi people, their crafts and culture.

Of course, in Sweden most museums have collections of woven materials and many small towns have small museums as well. I have researched the beautiful woven Sámi bands from Sweden.  Looking closely at the patterns is illuminating.  The colours have a particular significance; a rare example of there being a meaning in the woven bands.  Too often meaning is assigned to patterns and symbols and this meaning is assumed or ascribed but has no basis in fact.

In Stockholm, the Nordiska museum has a Sámi gallery which was very interesting and introduced me to the place of Sámi people and culture in the history of Sweden.  Going back last summer, I was slightly disappointed to see that the gallery has hardly changed in the last six years.

In 2011, we travelled as far as Kiruna and Jokkmokk to attend the Sámi market in August in Jokkmokk. However, the real highlight was the Ájtte, Swedish Mountain and Sámi Museum which has a stunning collection of clothes and lots of examples of woven bands. Every year the most important Sámi market is held in Jokkmokk in the first week in February.  I would love to attend this event.

Last summer, we went to the Weave Fair in Umea.  Umea was the European Capital of Culture in 2014 and the programme for the year included many events for and about the Sámi people. 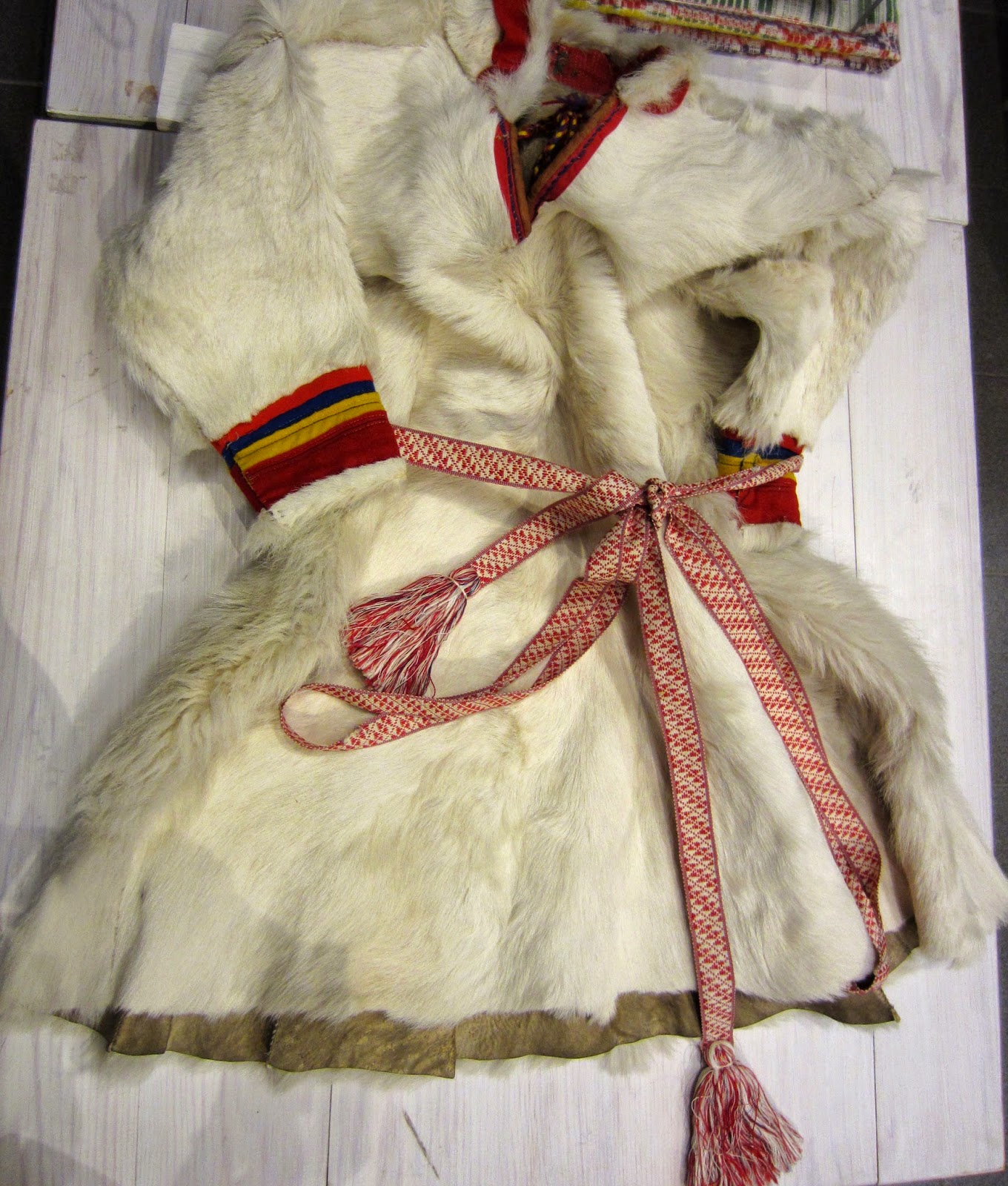 At the Weave fair, Astrid Enoksson, who lives in Tarnaby, had a display of display of Sámi costume and weaving. Her rigid heddles are made out of reindeer antler.

This beautiful coat and band was on the display.

See the blog entry for October for more about the Weave Fair in Umea.


At the Weave Fair, Stoorstalka had an attractive stall at the entrance of the Market Hall. They had a  very dramatic backdrop for their stall.


In Umea in the Västerbottens Museum there was a display of  ancient Sámi rock art.  A fascinating glimpse into another world.

I bought this lovely copy of an Iron age Sámi pot.  It is 3.5 inches tall and stands on my desk as a reminder of a wonderful holiday.


On our travels around the Baltic, I found two other museums with a Sámi collection. Unfortunately the museum in Estonia had none of its collection on display when I visited.  In Finland however, there were many examples of Sámi weaving and craft. We spent two weeks in this lovely country.

I visited the craft museum in Jyväskylä in central Finland which I will mention next month in my blog about Finland. We traveled further north and stayed in Oulu.  Here, I stumbled across a lovely museum, the Northern Ostrobothnia Museum which had a collection of Sámi artifacts.  These had been collected by the museum director who spent his summers with the Sámi people in the north of Finland.  He counted them as his friends and the collection was displayed with much thought. 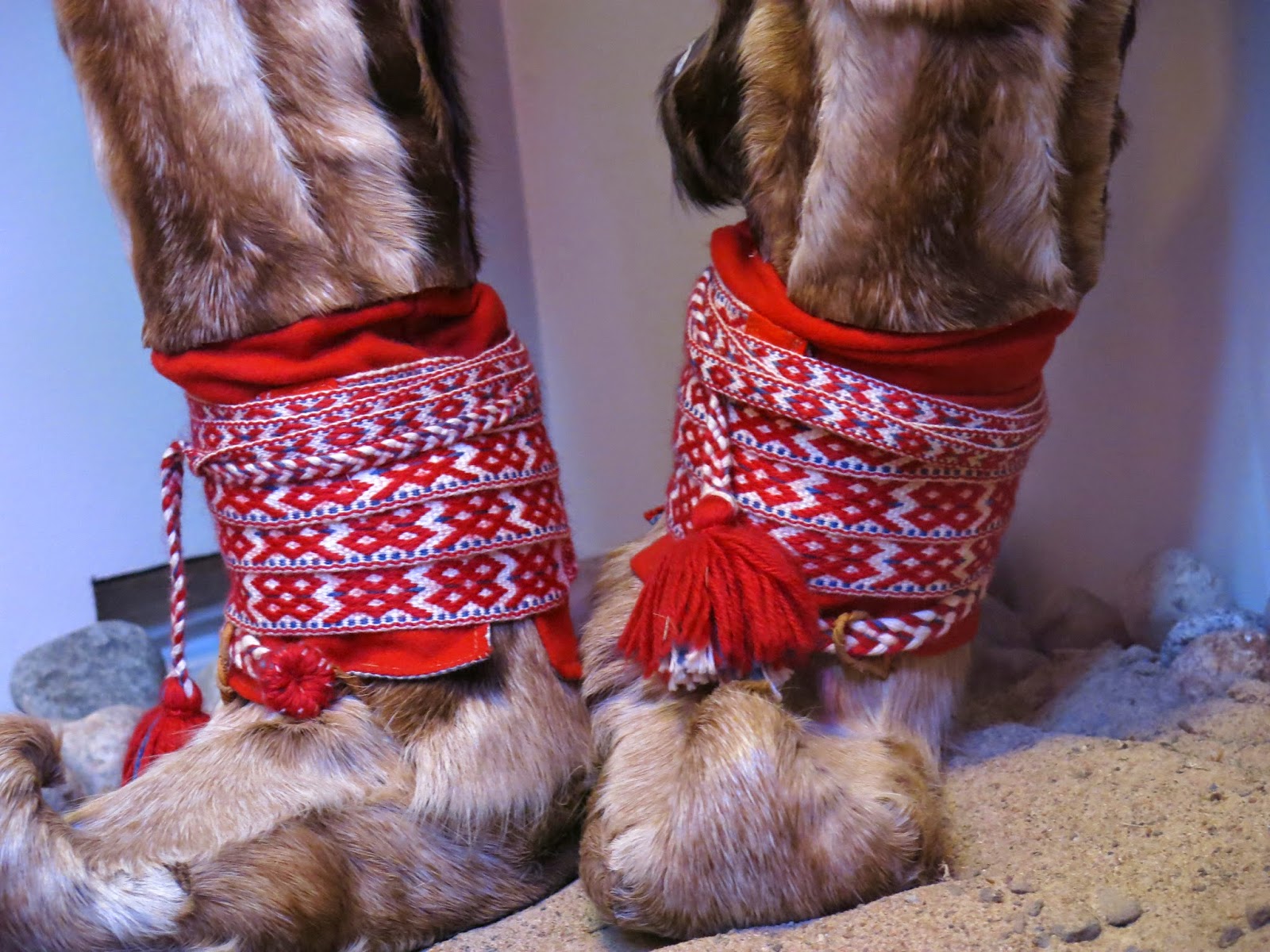 There were a number of bands displayed.  These lovely Sámi shoe bands have one of my favourite
patterns ( see Handwoven  2013, March /April Vol 164, no 2 for the weave pattern).


One of the shoe bands on display had three motifs.  I analysed the pattern and wove it.  It has eleven pattern threads and the graph is given on my blog.  The speckled edges are made by using a yellow weft thread so that it shows up against the red border threads. It is a very attractive shoe band. I have posted the pattern draft onto the blog for you to try.


If you want to know more about Sámi weaving, I am running an online workshop for the Braid Society on their Yahoo discussion group, Braids and Bands in March 2015. The workshop shows how to weave a particular type of band using a newly designed heddle from Stoorstalka - the Sigga heddle.  This heddle is used to make bands that have 'jumping' pattern threads. Details about the workshop and how you can join in are given on my blog.

I think that it is rather exciting that a new weaving tool has been developed.  It shows that the craft of band weaving is still meaningful and creative.

An excellent booklet The Sámi - People of the Sun and Wind, published by the
Ájtte Swedish Mountain and Sámi Museum is available in the Nordiska Museum

Posted by Durham weaver at 13:08 No comments:


Just before Christmas I read an interesting article by Elaine Lipson about the concept of Slow Cloth. Her influential paper :The Slow Cloth Manifesto: an alternative to the politics of production is about treasuring quality and creativity in a world that seems to value mass production rather than craft.

Slow cloth involves the concept of time - the time it takes to master skills, to practice and learn new skills and to work towards excellence. She makes the valid point that too many craft workshops are more concerned with selling new pieces of equipment rather than being geared for learners to develop a new skill in depth.  There is too often an emphasis on quick skills rather than making something of quality.

It is also about the continuation of cultural skills.  Skills such as weaving, are not familiar to many people and the connection to history and the meaning of these skills is sometimes not appreciated.
Our relationship to textiles has been altered by mass production and the availability of cheap clothes.

In a newspaper last year a reporter described the scene on a high street during the sales.  A woman dropped a bag of newly bought clothes but could not be bothered to pick it up as she was carrying so many other full shopping bags. The reporter found that it was full of t-shirts from a well known cut price department store.  Clothes are now considered disposable in ways that would have been unthinkable to our parents and grandparents.

The Personal Meaning of Textiles


The idea of Slow Cloth takes us back to the personal meaning of textiles.  The joy of creating something unique however small and however long it takes to make.

There is a wonderful quote in a book about Early Anglo-Saxon clothing, it is from an American re-enactor who had spent over 200 hours recreating her Anglo-Saxon cyrtel through spinning, dyeing, weaving and hand stitching,

- ' in the end it is a product of my hands, my heart and my mind and that is what really connects me to the spinners and weavers from a long time ago' (Walton Rogers, 2007, p 250).

The book finishes with the comment that we establish a direct connection between the past and the present by the pursuit of lost craft knowledge and the recreation of these forgotten skills.' (p. 251)

Slow cloth is not about a particular textile technique or a project - it is about taking time and finding the joy in learning and making.

What a good New Years resolution for 2015 - to use my heart, hands and mind to create something unique.