I wove items for my display of work at the  5th International Conference on Braiding:   Nordic and World Braids and Bands 2022, August 14-19, Svendborg, Denmark.

I enjoy weaving sentences so I have found sayings/proverbs from each of the Nordic countries. I asked a number of people for their suggestions for sayings/proverbs that had some connection to weaving or craft. Each band has a particular motif. Each saying has a border of the colours of the flag for that country.

For Sweden I chose the lovely Leksand pattern which looks like two fish.

The Sámi pattern is found in many areas but I saw it first on a long band in the Cambridge Museum of Archaeology and Anthropology.  They have a fascinating collection of Sámi artefacts and plenty of bands on display.

From Norway I chose this pattern with a heart. Norway and Sweden have many variations of heart patterns.

From Finland I found this pattern on one of the many bands that I have examined in museums around the country.

From Denmark I found this wavy pattern which evokes water.

From Iceland I found this motif which originally came from a complex band I saw in a small museum in the north of the country.

Of course, all these six patterns are shared in many countries. The geometrical nature of weaving means that there is a set of patterns which are ideal for weaving on patterned bands. Some cultures favour some types of motifs over others. It has been great fun looking at photographs that I have taken around the region. There are strong connections amongst all the countries which I hope will be reflected in in final piece.

Here are the first four motifs.

The final motifs are for Greenland and the Faroe islands.

For the Faroe Islands I found a photograph of the folk costume.  One girl was wearing a lovely belt with a distinctive buckle.  I used this design for the band with the saying from the Faroe Islands.

Here is the graph for the woven band. 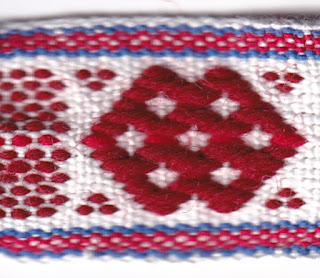 Greenland was settled by Norwegian and Icelandic explorers during the 10th century CE. There were two Viking settlements on the island. One imaginative story about the Viking voyage from Greenland to the New World was written by Nevil Shute in 1940: The Old Captivity.  He is an excellent storyteller but this book is unlike his previous stories as it deals with a mystical dream experience of a young pilot whilst recovering from an illness in Greenland. It is a haunting tale. I was reminded of it whilst I was weaving and I have started to reread the book after many years.

I thought about what motif would be suitable for the beginning and end of the band.  When analysing motifs, I found that I would give some of them names.  When weaving, this naming is useful as it places the design in my mind and fingers.  One such design is one I have always called the 'Viking boat.' There are a few coins with Viking boat designs such as this one.

Here is the weave chart.

Here is the final woven design.

This has been a fascinating project.  Here are the sayings:

I am intending to display the bands with a lucetted red cord which joins them together.  The red thread is a well used metaphor in Scandinavian countries.  It means the heart of the matter or the fundamental issue. It joins friends and communities together and is the link between Nordic countries. The red thread connects us all.

My display of woven sayings. 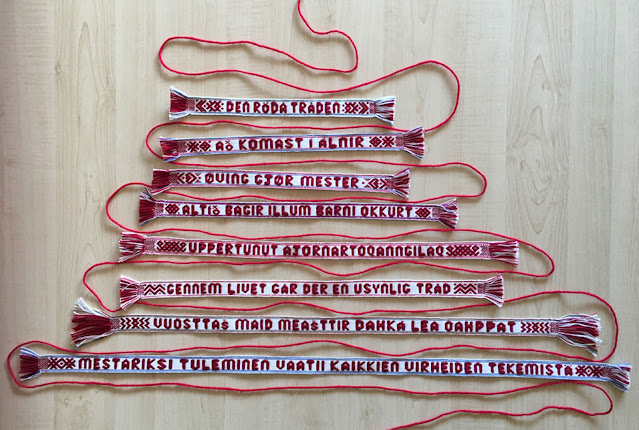 I will give the translations next month.