Over Christmas there were two programmes about the Sámi.  All Aboard! The Sleigh Ride was an example of slow TV. It was filmed in Karasjok, Norway and the journey followed an old postal route. The traditional sleigh was fitted with fixed cameras.   The three sleighs jogged along through snowy hills and past birch forests and across a frozen lake.  The journey took two hours - slow TV - and the programme was strangely hypnotic.  There was no dialogue just the natural noises of the reindeer feet crunching the snow and the tinkling of their bells.  You can watch some clips here:  http://www.bbc.co.uk/programmes/b06t3psw/clips

The second programme concerned two reindeer herder from Kautokeino in Norway .  It was first shown as part of the Natural World series in 2007- 2008 in episode 13.  The two girls Elle and Inga were seventeen years old when the programme was made. The film shows one journey they took herding their reindeer to summer grazing.

Previously on BBC TV, The Hairy Bikers, visited Sweden.  These two characters are excellent cooks and they journey around different countries trying out the local delicacies. To find out more about their adventures and lots of wonderful recipes here is their web site.:  http://www.hairybikers.com/ 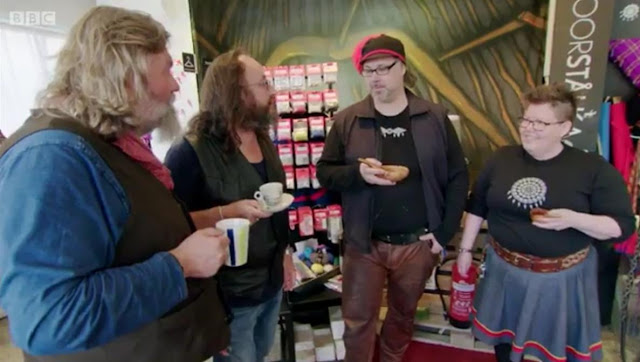 Here they are in the shop.  They tried their hand at traditional Sámi crafts and I was thrilled to see that one of them was taught how to weave a narrow band and the other made a belt. 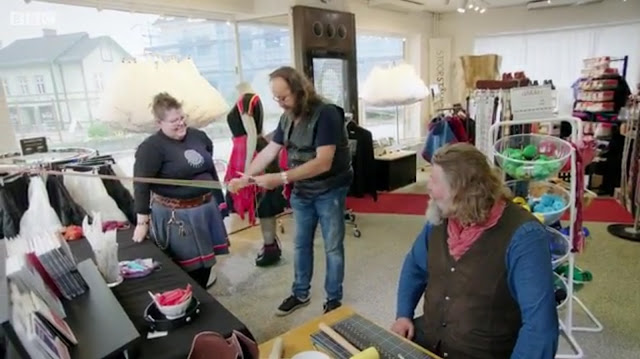 Weaving for the first time is not easy, especially when you have to do it to camera. 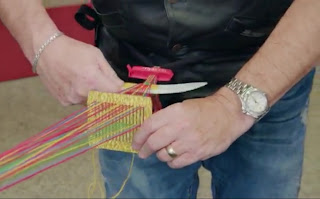 You can see the curved Gehpa shuttle in use.

There was also a close up of a woven band - one which I had woven and sent to Lotta and Per Niila.


The full pattern for this band is in my book  Weaving Sámi Bands and is illustrated on the front cover.
To have three programmes about Sámi culture and way of life in such a short space of time was wonderful.

The Winter Market in Jokkmokk 2016.

Jokkmokk in north Sweden is the home of the Winter Market. It takes place in February each year. It has been held for over 400 years and is an important occasion for the Sámi.

Here is the link to the web site.   http://www.jokkmokksmarknad.se/visitors/   The list of events is very enticing.   Do take a look at some of the images from previous Winter Fairs.  Traditional craft work is an important element of the Fair. There are several exhibition of art and craft work, including an exhibition of the work of students from Sámi allaskuvla which is the only Sámi-speaking institute of higher education where the approach to Duodji (Sámi handicraft) is from a research perspective.  I wish I could be there.

I first visited Jokkmokk in 2011.  It was quite an adventure travelling so far north from the UK. I went to the fair held in August which is much a smaller event. I would love to go to the winter fair - perhaps next year.

Email ThisBlogThis!Share to TwitterShare to FacebookShare to Pinterest
Labels: Sámi